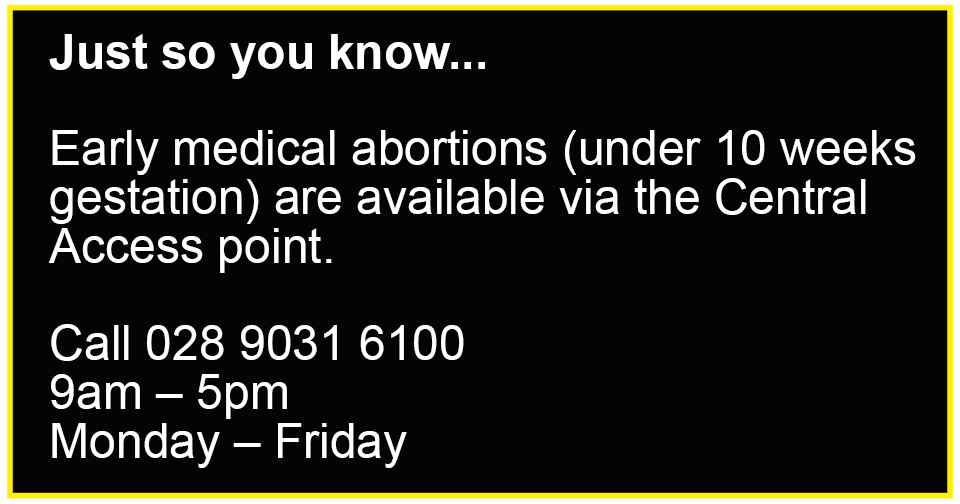 In October 2019 abortion decriminalised and became lawful in Northern Ireland. A new framework for lawful abortion services came into effect on 31 March 2020.

When will a termination be allowed?

When there is substantial impairment to the fetus, including when death is likely before, during or shortly after birth.

When there is risk of death or serious permanent injury to the woman or girl:

Who can perform a termination?

Professionals may conscientiously object to performing a termination, unless it’s necessary to save the pregnant woman or girl’s life or prevent serious permanent physical or mental injury.

Where can a termination take place?

Those using abortion pills purchased online will not be prosecuted. If you need medical assistance following their use, health professionals are no longer under a duty to report their patients’ use of abortion pills.

We are pressing the Northern Ireland Department of health to for new services to be introduced as soon as possible so that women and girls can finally access the healthcare they need.

We are also pushing for women to be able to self-manage abortions at home during the COVID-19 crisis. Email the UK government demanding the rules are changed to allow this basic healthcare.

How we got here

Explore the timeline below to learn more about the abortion regime in Northern Ireland and what we have done to help bring the law in line with international human rights standards, including the decriminalisation of abortion.