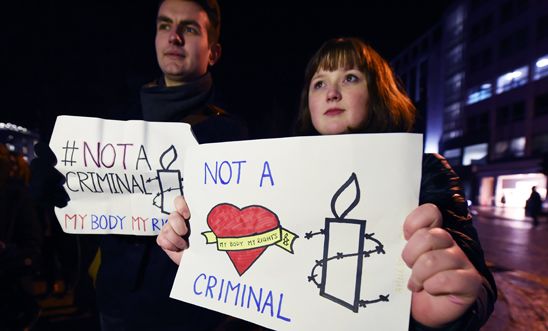 There is a near-total ban on abortion in Northern Ireland, even in cases of rape, incest and fatal foetal abnormality. Women face life imprisonment for a health service freely provided on the NHS everywhere else in the UK.

This Victorian-era law dates from a time before the invention of the lightbulb. It must be brought into the 21st century – urgently, before more women are criminalised, forced to travel or left to suffer alone. Abortion is a matter for women and their doctors, not judges.

We are campaigning for the Northern Ireland Assembly to:

Northern Ireland has among the harshest abortion laws in Europe, laws that violate the basic human rights of women and girls.

Abortion is illegal, even in pregnancy as a result of rape or incest, or where the foetus has no chance of surviving. Only in extremely restrictive cases, when the woman’s life or health is in serious danger, can she access a termination.

‘Abortion in Northern Ireland is a criminal offence which is punishable by a maximum sentence of life imprisonment’
John Larkin QC, Attorney General for Northern Ireland

Instead of getting the healthcare they need – and would get on the NHS anywhere else in the UK – women are forced to carry the pregnancy to term or to travel to England or elsewhere, with no regard for the psychological or physical impact on them or their families.

Midwives and doctors also face the threat of life imprisonment for involvement in terminations.

Abortion is a human rights issue

Northern Ireland’s abortion law is in breach of the European Convention on Human Rights by not allowing for terminations in cases of rape, incest or fatal foetal abnormality.

In November 2015, the Belfast High Court ruled that Northern Ireland's law had abused rights of to in the case of Sarah Ewart - though the government is challenging this ruling in the court.

More women are being prosecuted

In early April 2016, a 21-year-old woman in Belfast was given a three-month suspended sentence after pleading guilty to two charges – procuring her own abortion by using a poison, and supplying a poison with intent to procure a miscarriage.

The ‘poison’ refers to medicated abortion pills which are internationally regarded as a safe and recommended option for terminating a pregnancy in the first trimester.

If she had lived anywhere else in the UK, this young woman would never have found herself in court. She would hopefully have been given the medical support she needed, instead of having to source pills on the black market to take alone in her bedroom.

And in a second case, a mother has been accused of supplying abortion pills to her pregnant teenage daughter. Her case has been adjourned until May 2017.

It hits the poorest hardest

The criminalisation of abortion does not stop women needing abortions. It simply means that women and girls who can’t afford to travel, take these pills without effective medical supervision or support.

Those who can afford it, travel to England to get the treatment they need legally – a thousand women make that journey from Northern Ireland every year. No woman with the money to travel to England would have been prosecuted.

The risk to a woman’s life is effectively a ‘postcode lottery’, decided on the luck of the draw depending on one’s place of residence within the UK.

There continues to be a social stigma around abortion in Northern Ireland, which damages women and girls. This often takes the form of public demonstrations and harassment outside reproductive health clinics.

‘My guilt and shame was not about my decision to have an abortion; it was because society had made me feel like I was a fallen woman, dirty and criminal. That shame, that stigma was the most damaging part of my experience. Not being able to say a word in case I outed myself as some sort of perceived murderer. My silence was suffocating.’
Aoife, from County Down, had an abortion in England when she was 17 years old

Politicians continue to duck the issue, unwilling to change the law despite the fact that 7 in 10 people in Northern Ireland now support abortion law reform.