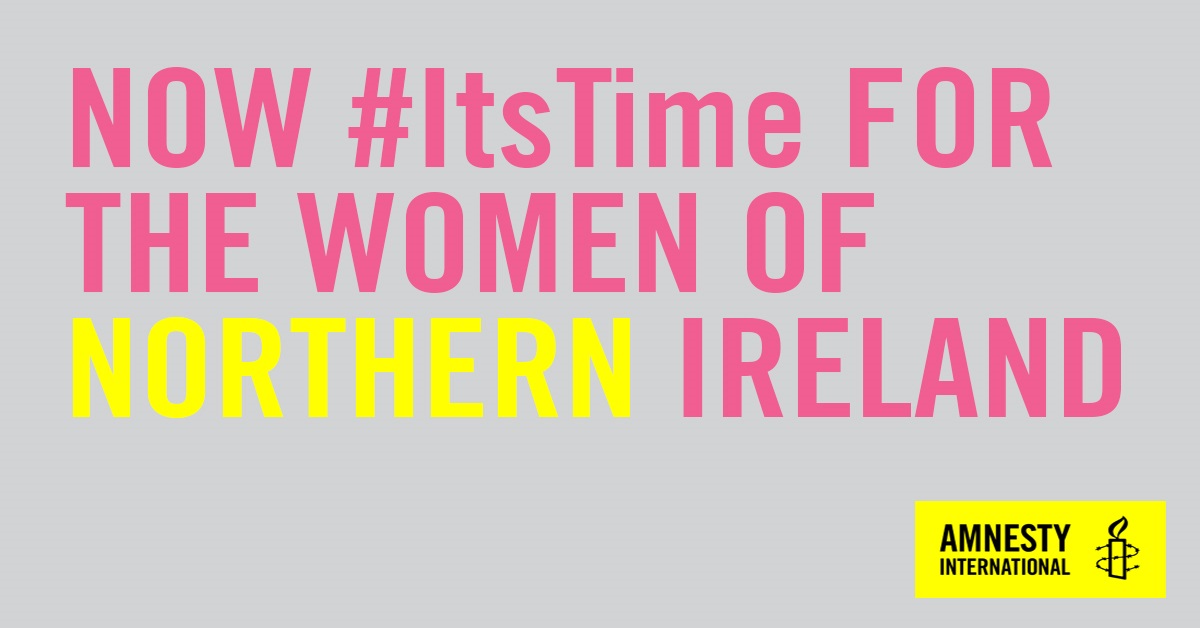 A challenge to a decision by the Public Prosecution Service in Northern Ireland to prosecute a mother for buying her then 15-year-old daughter abortion pills online gets underway today in a Belfast court.

The woman – who cannot be named to ensure her daughter’s anonymity – is accused of two charges of unlawfully procuring and supplying abortion pills in 2013. If her challenge is unsuccessful, she faces a criminal trial and up to five years in prison.

Today’s hearing will focus attention on the criminalisation of abortion in Northern Ireland. It is the first-time the Public Prosecution Service has been challenged on a decision relating to Northern Ireland’s restrictive abortion law. A Belfast judge who granted leave for the judicial review said the case raises “issues of considerable public importance and public debate”.

Speaking to Amnesty International – an intervenor in the case working closely with the mother and legal team to contest the prosecution – ahead of today’s hearing, the mother expressed how “painful” the past five years of her life have been as she has been hauled through the Northern Irish criminal justice system.

The mother said that she has been put through “five years of agony” and explained how “painful” it has been to have the prosecution hanging over her head “every single day of my life... I try for the sake of my family to keep my head above water”.

“[The prosecution and looming judgment] is there at every important moment of my and my children’s lives – just hanging over me. The fear and pain of it all. I feel like I am not allowed to move on”, she said.

She also explained how she has been “struggling with anxiety”, and that she has lost all trust in doctors and no longer uses their services since it was her GP who told the police about the case

“This is an important day for my client.At the centre of this case is a loving mother and daughter who, over the past five years, have had to repeatedly endure and relive a private and distressing time in their lives. If we’re successful in our challenge to the prosecution, this will contribute to the dismantling of a law that for so long has been used as a weapon against women and girls’ rights.”

Amnesty is an intervenor in the case and believes the prosecution is a breach of both the mother’s and daughter’s rights.

“Today, a woman who has been gripped in the clasp of Northern Ireland’s cruel abortion law for five years will bravely challenge the prosecution against her.

“This has been a devastating time for her and her family and a pain she should never have suffered. If she was from any other part of the UK where safe and legal abortion pills are easily accessible, her family wouldn’t be facing this traumatic ordeal.

“The judges must see that this is such obvious cruelty. They now have the power to not only give this woman her life back, but to give hope to all women and girls living in Northern Ireland.

“We urge the judges to consider this case and its implications carefully and listen to all of those who are calling for an end to this demeaning, harmful and unjust law.

The woman is accused of two charges of unlawfully procuring and supplying abortion pills in 2013.

The daughter had been in a physically and mentally abusive relationship. When she became pregnant, she sought her mother’s support and assistance to have an abortion, having decided she did not want to continue with the pregnancy. When the pregnancy was terminated, the mother and daughter went to their GP seeking counselling services to deal with issues around the relationship. During the appointment, they disclosed the use of the pills. After being referred for counselling services, the mother was later interviewed by the Police Service of Northern Ireland (PSNI) without a solicitor present. The mother was almost nine months pregnant and gave birth less than two weeks later. The PSNI gave the file to the Public Prosecution Service who then deemed it in the ‘public interest’ to prosecute the mother.

Medicated abortion pills are internationally regarded as a safe and recommended option for terminating a pregnancy. Mifepristone and Misoprostol are on the list of essential medicines of the World Health Organisation. However, the criminalisation of abortion in Northern Ireland means that women and girls are forced to purchase these pills online, risking prosecution in doing so and taking these pills without medical supervision.

The law in Northern Ireland dates back to 1861 and makes abortion illegal in almost every circumstance. An estimated 1,000 women travel every year to other parts of the UK for abortion services and many others go online to buy abortion pills.