Trump visit: Theresa May must 'stand up to Trump' after 18 months of roll-back 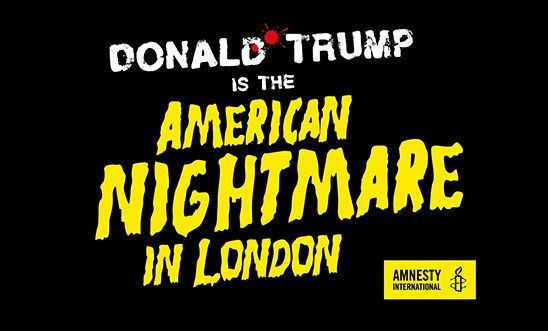 18-month-long presidency has seen a catalogue of human rights reversals, from the detention of child migrants to the travel ban and attacks on women’s rights

Ahead of the visit to the UK of the US President Donald Trump next week, Amnesty International is calling for Theresa May “stand up to Trump” and to put the Anglo-American diplomatic relationship on a new “intelligently critical” footing.

Amnesty has written to the Prime Minister requesting that she take up some of the key human rights issues when she meets the president for talks, including the US administration’s policy of detaining child migrants and the reinstatement and expansion of a highly controversial “global gag rule” affecting funding for international women’s health programmes.

Meanwhile, Amnesty, a host of other groups and thousands of members of the public will be staging protest marches and rallies on Friday 13 July, when Mr Trump is due to hold political talks with Theresa May and her fellow ministers.

In London, Amnesty will participate in Women’s March London’s “Bring The Noise” march as part of a larger “Together against Trump” march and rally. Amnesty activists, some dressed as horror movies characters, will hold colourful placards with Mr Trump’s face and messages such as “Donald Trump is the American nightmare in London” and “A nightmare on any street”.

To signify the protest’s positive pro-human rights spirit, the reverse side of the placards will also feature the slogan: “Rise and shine: Defend human rights”.

“In only 18 months, Mr Trump has presided over a nightmarish human rights roll-back - from locking up child migrants and withdrawing from global human rights bodies, to imposing a discriminatory travel ban and decimating global funding for women.

“Donald Trump has been on the wrong side of history with almost every major decision he’s taken on human rights.

“Theresa May should stand up to Trump, reassert the core values of multilateralism and human rights, and put the Anglo-American diplomatic relationship on a new ‘intelligently critical’ footing.

“We’re not taking Trump's trashing of human rights lying down. Millions of people around the world - from New Delhi to New York, from Monrovia to Madrid - are appalled at what’s been happening.

“Mr Trump may be shielded from the sight of our banners, but we’ll be on the streets making our voices heard. Our message is simple: Enough already, Mr Trump!”

Among other things in the past 18 months, Amnesty has strongly criticised President Trump’s administration over separating child migrants from their parents; the withdrawal from the UN Human Rights Council and the withdrawal from the Paris Agreement on climate change; the appointment of Gina Haspel as director of the CIA; plans to consider using nuclear weapons in response to a cyber-attack in the USA and to allow the imposition of death sentences in drugs cases; a failure to introduce wide-ranging new gun-control laws; the ending of “Temporary Protected Status” for over 250,000 people from El Salvador; the decision to recognise Jerusalem as the capital of Israel; its insistence on pushing ahead with a revised multi-country travel ban; an executive order affecting the Mexico-USA border which allows for the forcible return of people to life-threatening situations; the reinstatement and expansion of a “global gag rule” affecting funding for international women’s health programmes; its continued sale of military equipment to countries with poor human rights records; and the decision to continue the construction of the Dakota pipeline despite environmental and cultural concerns.