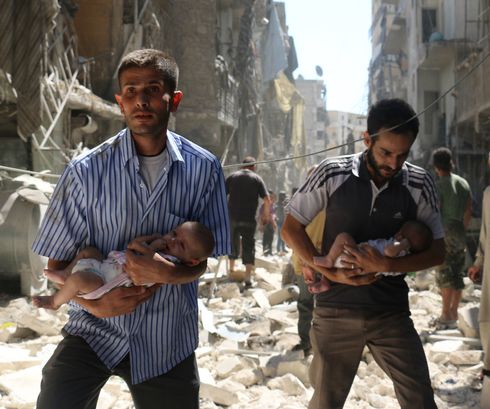 Years of bloody civil war has taken its toll on the people of Syria. Barely a week goes by without the violence and terror of this complex conflict making the headlines. What started as a peaceful cry for freedom has descended into a deadly mess, reaching well beyond the borders of Syria.

The impact of the fighting, as ever, is being most brutally felt by civilians. Since the beginning of the Syrian uprising, we have documented a horrific number of war crimes and crimes against humanity, mainly committed by government forces.

Syrian journalist Marwan Hisham speaks poignantly of his return to Raqqa after a 4-year absence as any hope for normality quickly fades for a part of the world braced for yet more conflict and catastrophe.

“Hostilities will impact and restrict access to humanitarian aid, pushing the civilian population - which has already suffered years of violence and displacement - to the brink."

360° Syria: How media activists are shining a light on war crimes

Our new website showcases specially-created photography gathered by Syrian media activists. In the aftermath of a bombing, these citizen journalists also rush to the scene to document the devastation caused by attacks on cities across Syria. Explore Syria in 360°.

A family in search of a better life

Muhammad and Maha were newly engaged, building a house and planning for the future when Syria’s civil war broke out. Within months everything changed, and they faced years of dislocation, prison, torture, and abuse. But now in London, they finally feel optimistic again.

Syria: The siege of Eastern Ghouta

In February 2018, the Syrian government and its ally Russia began a seven-week bombing offensive, including a chemical attack, on the people of Eastern Ghouta - home to 400,000 civilians.

Several governments have begun military action against Syria. Whatever happens, they must protect civilian life.

What appears to be another sickening chemical attack in Douma has killed dozens, including children. Under international humanitarian law, the use of chemical weapons is absolutely prohibited.

The situation in eastern Ghouta is by no means a recent crisis. Syrians have now endured seven years of horrifying violence.

'How long can we tolerate this situation?' Stories from the Greek islands' refugee camps

15,000 people are currently stranded on the islands. They need and deserve hope for a better future. Urge the authorities to take action.
Blog

The US resumes its policy of going against the basic values of decency and dignity when it comes to helping oppressed people.

Among the tens of thousands of men, women and children who have gone missing in Syria, this powerful film tracks some of the stories of those most horrifically affected by Assad's regime.

This Day of the Disappeared, we're highlighting the devastating plight of tens of thousands of people in Syria who have gone missing or been detained since the onset of the bloody crisis in 2011.

The battle for control over the Syrian city of Raqqa is entering its final stage. Read our new report on the catastrophic toll it is having on the people trapped under fire in the region as they face three-way attacks.

Gyan and her brother Alan fled their homes in Syria to escape war and reach safety in Europe. A dangerous and exhausting journey for anyone, but the stakes are even higher when you're in a wheelchair. This is their incredible story.

The human slaughterhouse: Mass hangings and extermination in Syrian prison

Saydnaya Prison is where the Syrian government quietly slaughters its own people. It is a place carefully designed to humiliate, degrade, sicken, starve and ultimately exterminate those trapped inside.

Theresa May’s message to the UN: Still shirking not sharing

Our Prime Minister has just addressed world leaders at the UN General Assembly in New York, and her central message is a bold attempt to permit her to take less responsibility.

The horror of Syria's torture prisons

For the first time ever, you can explore a Syrian torture centre. Together with research agency Forensic Architecture, we spoke to survivors of one notorious prison and have used their memories to recreate the sounds, beatings and fear.

Syrian media activist, Tony al Taieb, explains why he and his colleagues risk their lives every day to shed light on the atrocities being carried by President Assad's regime.

Russian and Syrian government forces are deliberately targeting hospital after hospital to pave the way for ground forces to advance on northern Aleppo, according to our latest investigations.