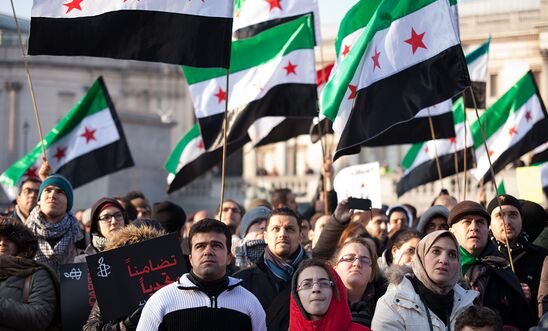 Demonstrators carrying Syria flags at a UK rally in Trafalgar Square, as part of the Global Day of Action on the Middle East and North Africa © Amnesty International (photo: Imran Uppal)

Responding to a decision of the Higher Regional Court in Koblenz, Germany, which has sentenced Eyad al-Gharib, a former Syrian security officer, to four-and-a-half years in prison for his role in aiding and abetting the torture of detained protesters in Damascus, Amnesty International’s Deputy Director for the Middle East and North Africa, Lynn Maalouf said:

“Today’s historic verdict – the first of its kind for crimes under international law committed by a Syrian government official- is a resounding victory for the tens of thousands of Syrian torture survivors and victims of enforced disappearance as well as for Syrian and international human rights and litigation organisations who together, for years, have fought relentlessly for truth and justice. These organisations helped ensure crimes were documented and legal files built for prosecution and without them this trial would not have been possible.

“It also sends a clear message to the Syrian government that those responsible for horrific violations will be brought to justice. This verdict comes almost ten years after the first peaceful protests started in Syria, during which the state deployed its machinery of cruelty against its own people, across its detention centers and prisons.

“During these ten years, the international community has consistently fallen short of taking concrete action in the face of ongoing egregious violations and to hold those responsible accountable.

“We call on more states to follow Germany’s example by investigating and prosecuting individuals suspected of committing war crimes or other crimes under international law in Syria through their national courts under the principle of ‘universal jurisdiction’. We also reiterate our call to the UN Security Council to urgently refer the situation in Syria to the International Criminal Court to ensure that perpetrators from all parties to the conflict – including those ‘most responsible’ - high-ranking officials and commanders - face justice.”

In February 2020, Anwar Raslan and Eyad al-Gharib, former Syrian officials, were arrested by German and French police. Both were charged with crimes against humanity, over the torture of detainees held in State Security branch 251, also known as al-Khatib, in Damascus.

For a decade Amnesty International has documented the systematic use of torture and other ill-treatment in Syrian places of detention - including al-Khatib. These violations, committed in the context of the armed conflict, constitute war crimes, and because they form part of a widespread and systematic attack against the civilian population, are crimes against humanity.