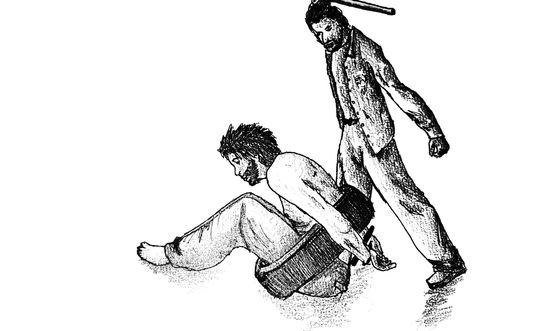 Anwar Raslan entered the courtroom. Unlike Eyad al-Gharib, he didn’t hide his face. The Colonel was escorted to his seat by policemen. He was placed behind a glass shield.

I took a long look at him. Everybody else faded from my view. I could only see the Colonel, unarmed, in his civilian clothes, just meters away from me. The atmosphere was oppressive and unsettling.

Looking at him sitting behind that glass shield, I had no feeling of happiness. I was just thinking: ‘Why? Why did you do those monstrous acts?’

Much has been said about how this trial is a momentous occasion for justice and for Syrians. I agree to some extent, but I can’t be happy about this. Too many people have been killed due to torture, including my friends, colleagues and relatives. They’ll never return.

Maybe the chronic despair and pain I have been living with for years, like so many other Syrians, has developed an iron shield around me, blocking the few good feelings of happiness from moving my heart?

It’s not just the countless lost souls which keeps the mood dark - it’s also because Assad’s torture network which Anwar and Eyad worked in is still being allowed to operate. Tens of thousands of Syrians are still languishing in dirty, disease ridden, overcrowded cells and being tortured, some to death every single day this ghastly regime maintains its grip on Syrians throats.

I’m here in Koblenz, Germany to report on proceedings for Amnesty International UK. However, I find myself trying to make eye contact with the Colonel and silently talking to him. “Imagine if you hadn't tortured us, Anwar. Imagine if this brutal torture machine did not exist. We would not have lost tens of thousands of people - some of the brightest lights who dreamed of a Syria without the corruption and violence of the regime. We would not have tens of thousands of grieving mothers, fathers, sisters, brothers. How many Syrians’s live in pain, every day because of people like you, Anwar?”

I imagine millions of Syrians, including me, would still be in our country today. We’d be in our homes, with our loved ones, and friends, living in safety without fear of disappearance or death under torture. Perhaps the Syrian revolution would not have started.

However, we can not go back in time. We are here and you are sitting behind a glass screen. You don’t have any of the weapons which made you the big man of the Al-Khatib Branch in Damascus.

I myself will never return to the man I was before my arrest and torture. I still bear the signs of harm & violation on my body and soul. It was not Raslan who ordered my torture but his partner in the network Major General Jamil Hassan, who was head of the notorious Syrian Air Force Intelligence Service. Thankfully, there is now an arrest warrant out for him.

Anwar still doesn’t catch my gaze. I tell him, silently, “You would not have been able to torture at least four thousand people and kill so many, unless those victims were brought to you by the likes of Eyad and others in Assad’s vast torture network. All those lower ranking officers who raided houses, beat and humiliated Syrians in front of their families, arrested people from the streets and on checkpoints. Those officers were an extension of you - and you were an extension of Assad.”

“The Syrian state protected you and gave you power and impunity. You, like many others were promoted up the command chain based on how many people you tortured and killed. But now here you are, just one man without his weapons of mass devastation. Now it is your time to answer questions, but you will not be beaten like we were - you will be given your fair trial, something infinitely more powerful than you could ever imagine.”

Now Raslan has an opportunity to speak. This is his chance. Maybe he’ll do the right thing for once in his life. Maybe he’ll expose the torture network that he was involved in. Or maybe he’ll continue to maintain this code of silence which he thinks gives him and his former bosses some level of protection. Maybe, but here’s the thing - we already have enough evidence, enough documents that details the mass atrocities committed by Raslan, al-Gharib and their bosses. Thanks to so many brave Syrians - lawyers, activists, journalists, investigators, families and victims who’ve relentlessly pursued justice and truth, often putting their own lives at risk in doing so, we are here, at this momentous trial in Germany.

I continue with my fixed gaze. Raslan is unmoved. “Colonel - I wonder if you will show regret, and apologize to the mothers, wives, daughters, sons and fathers who lost their loved ones in your branch.”

“Colonel - Your silence is a further abuse of your victims and their families. It continues the horrors you inflicted on us. I don’t know if you sleep well or if you see the faces and bodies of your victims. I don’t know if you, like so many Syrians, have nightmares. If so, this trial - this fair trial, may be a relief for you. You may come to terms with yourself and find closure after such a notorious and violent life.”

Raslan can’t hear me of course - and does not look at me.

Now the Colonel has to speak. The judge has asked him to say his name.

In Part 3, Mansour discusses how he felt when Anwar Raslan finally looked directly at him.