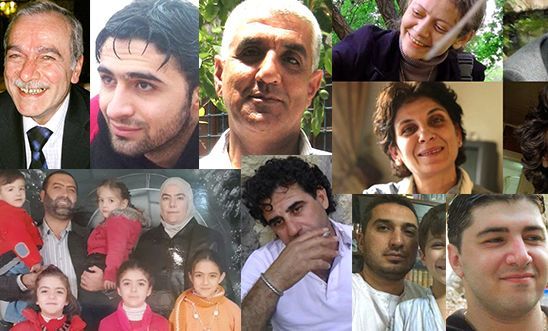 The torment and lack of closure is written on their faces as we wait to start our meeting. Fadwa, Mariam, Ahmed, Maha, Khaled, Diab, Riyad, Bayan and Alaa - all are either themselves Syrian survivors of torture or enforced disappearance, or have had their loved ones disappeared or tortured because of their human rights activism.

I can’t begin to comprehend the pain they’ve all been through and live with every day. Whether it’s not knowing where your son or husband is and how they’re being treated or whether it’s never being able to regain the years lost to Bashar al-Assad’s dungeons and death camps. It’s a truly desperate situation.

It's hard to take my eyes off Mariam during the meeting. Sometimes it feels as if she’s not quite present as we all discuss strategies and tactics for the year to come. Maybe she’s remembering feeding her son or tucking him in to bed or saying goodbye to him before he went to school or maybe to a protest. The regime took him away, tortured him and executed him. He was 25 years old. Mariam carries a picture of his corpse on her phone.

For all the sorrow and depression, what is remarkable about the people sitting round this table deep in the Dutch countryside is their burning desire to create something tangible to help find some kind of closure and justice. They’re forming something which is partly a self-care network and partly a powerful group advocating for the release of Syrian political prisoners and justice for all Syrians.

Each participant represents a different organisation coming together with a common purpose. At the meeting are representatives of Families for Freedom, Caesar Families, Ta’afi and the Association of Detainees & Missing People from Saydnaya.

They’re developing a charter to support victims and creating strategies to advocate for genuine justice. They want to see proper punishment for those in Assad’s regime and its enablers who’ve caused so much misery for Syrians through their deliberate policy of disappearance, torture and execution.

Such mass atrocities will not be forgiven or forgotten. Syrian human rights activists like these here today are making sure of that. It’s a long-term battle that Assad can’t be allowed to win. ‘Victory’ through normalisation would mean Assad’s organised and systematic attack against the civilian population would also be normalised. Nobody here is willing to let that happen.

No peace without justice

This initiative is not just about revealing the truth or punishing the torturers and their enablers. It’s about ensuring people like Mariam, Fadwa, Ahmed and the rest can get some level of closure to their daily torment.

There are only a few people here but they represent hundreds of thousands of Syrians – all carrying their traumas, wounds and demands for accountability.

It would be utterly wrong - delusional even -  to think there can be any ‘stability’ or peace in Syria without meaningfully addressing the deep injustices experienced by these brave activists and hundreds of thousands of other Syrians.

Impunity for decades of human rights crimes was one of the core reasons for the crisis escalating in 2011. Now all these years later it is still fueling the Syrian crisis.

As Mariam and the others will tell you - at one level it’s very simple: don’t expect peace or ‘stability’ in Syria if there is no justice for them and thousands upon thousands of others. We have many years of evidence to prove that point.