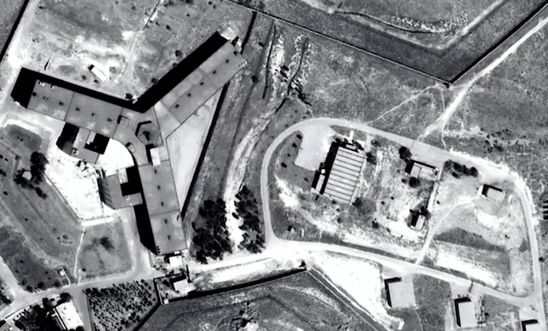 The notorious Saydnaya military prison has been the scene of sickening levels of abuse, including mass hangings © Digitalglobe 2016

The first trial of former officials of the Syrian government’s security service on crimes against humanity charges is set to take place on Thursday (23 April), providing “renewed hope” for the tens of thousands of people unlawfully detained, tortured and killed in Syrian government prisons, said Amnesty International.

Amnesty has documented the Syrian government’s systematic practice of arbitrary detention, torture and enforced disappearance for decades, including in reports detailing inhuman conditions in Syrian jails.

Among the many documented abuses in Syrian prisons, Amnesty has reported on thousands of extrajudicial executions carried out following sham trials in Saydnaya military prison near Damascus.

These practices, committed in a widespread and systematic manner, amount to crimes against humanity, as well as war crimes.

To date, universal jurisdiction (cases brought in other countries) has been the only means for Syrians hoping to see justice for these crimes. Amnesty has repeatedly called on the United Nations Security Council to refer the situation in Syria to the International Criminal Court at The Hague.

“This trial is a historic step in the struggle for justice for the tens of thousands of people unlawfully detained, tortured and killed in Syrian government prisons and detention centres.

“This would not have been possible without the bravery and sacrifices of Syrian survivors, families of victims, and scores of other individuals and organisations who have relentlessly pursued justice and truth, often putting their own lives at risk in doing so.

“At a time when Syrians feel that the international community has failed them, this trial brings renewed hope that some measure of justice is still possible.

“Amnesty International is also calling on states to follow Germany’s steps in initiating similar proceedings against individuals suspected of crimes under international law, including by resourcing their war crimes units.”

To date, the UK government has shown support for United Nations initiatives and has called for the UN Security Council to refer the situation in Syria to the International Criminal Court. However, Amnesty believes the UK should provide more material assistance to Syrian justice groups doing the arduous work of assembling evidence and attempting to bring cases against alleged Syrian government perpetrators.

“We’d like to see the UK government providing much more support for Syrian human rights groups who are struggling on extremely tight budgets to do the vital work of documenting war crimes.”