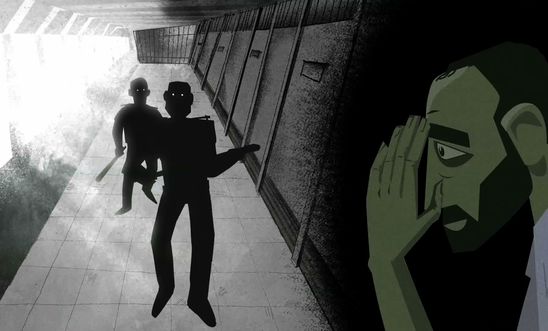 Looking into the eyes of a torturer

Now the Colonel has to speak. The judge has asked him to say his name in arabic.

“Anwar Raslan, Homs, fifty seven. The Colonel spoke with an assertive tone, like a superior officer instructing the staff in his torture facility. He only said those five words before moving back and away from the microphone.

I wondered what his victims felt hearing his voice. Was it too penetrating? Did it throw them back to that time and place when they heard it for the first time? Did they remember him shouting, swearing and threatening to kill them?

His voice triggered a lot of memories for me. I was detained in a cell three floors underground in Damascus. This hell-hole was run by the 4th Armoured Division, that is led by Maher Assad, the Syrian President's brother. My jailers shouted at us all the time. It was relentless. One day they wanted to count us. The jailer sat behind a hole in the cell door and asked us one by one to come to him and say our full names. He didn’t say “what’s your mother’s name”, instead he spat out “what’s the name of the bitch”. When he asked me where I’m from, I said ‘Midan in Damascus’. He swore at me and said “do not worry, we burnt it”. Midan, was a neighbourhood in Damascus that used to have many peaceful demonstrations.

When the jailers beat us, they’d scream like monsters and say: “This is the freedom you want you son of a bitch...I am gonna f*** your heart”. Psychological torture was, and still is, used along with physical torture in Assad’s jails - breaking our minds was often as important as breaking our bones. One day, in an Air Force Intelligence detention facility, I was on my knees, blindfolded, with my hands handcuffed behind my back and my head forced down. The guard said words that are ingrained into my entire being - “What is your last wish, before we execute you”.

This is how we first heard the torturers voices. These are the words we would hear every day.

After hearing Anwar’s forceful voice again, I suspect his victims would have been immediately re-traumatised. But we must hear the Colonel’s voice. In the interests of justice and accountability, we must hear his voice. I stared intently at Raslan from my seat in the public gallery and silently spoke to him: “Tell us - where are the bodies of those killed in your branch? Where did you bury them? Where are the mass graves? What did you do with the bodies, did you burn them? Your silence is complicity with the torturers. Your silence is a continuation of your crimes, and the crimes of those who are still, to this day, torturing and disappearing Syrians”.

I kept looking at the Colonel, rarely taking my eyes off him. From time to time, I looked at his victims scattered around the gallery. I wanted to catch the moment when their eyes met.

It was around an hour into the hearing when Raslan finally looked over to those of us in the public gallery. We made eye contact.

In detention, it was a deadly mistake to look into the eyes of your jailor - it was a redline. It was hard, especially when being beaten and begging them to stop. You’d try to find some human connection between yourself and your torturer, but of course, that eye contact, that attempt at generating empathy, would be met with further beatings.

Sometimes, during a beating, your blindfold would slip and unconsciously you’d look at the jailor’s face and eyes. You’d immediately realize that you’d inadvertently violated the taboo. All you could do was close your eyes and sink in the ground to take the next beating.

But now, here in this German court, this arena of genuine justice, I was looking into the Colonel’s eyes and he was looking into mine. At first, all I could think was ‘don’t blink’. I composed myself and spoke with my eyes to Raslan: “I will not blink even if this stare lasts forever. You will not scare me. I will look into your eyes without fear”. I widened my gaze. Everybody faded from my sight. There was only the Colonel and I.

It was the first time in my life that I was not intimidated by one of Assad’s ‘security’ officers.

Like many Syrians, I lived in fear and was terrorized my whole life by these ‘security’ men. ‘Security’ was the common word in Syria used to describe the notorious intelligence forces. ‘Security’ in Assad’s Syria was and still is ‘insecurity’ - especially for those who value freedom, justice & dignity.

These agencies don’t just break our bones - they devastate our mental health. I don’t believe Syrians, or many others for that matter, have given enough attention to the impact and psychological damage Syrian’s have experienced living under Assad’s dictatorship - or how we can begin to improve our mental health.

However, I have to say, this ‘game of stare’ with the Colonel started to feel like therapy. This persistent eye contact with a man like Raslan was liberating - I thought in that moment: “I am on my way to be free - free from the fear and terror inflicted on me my whole life”.

We Syrians should not be ashamed to say that we were scared - It is a key step towards treatment, towards freedom. Looking into the eyes of a tortuer and not feeling afraid was therapeutic. Looking into the eyes of a torturer as he’s sitting in a proper court of law was liberating. Maybe such moments will have the same positive impact for millions of Syrians who’ve had to avert their eyes from the ‘security’ men for most of their lives.

This trial in Koblenz, Germany feels like the start of a collective process of healing for many of us Syrians. It feels like liberation and I feel exhilarated breaking one of the regime's taboos. I thought to myself, as I was watching Raslan and he was watching me: “one day, when Bashar Assad is held accountable, I hope his trial is aired on TV. I hope he looks into the TV cameras so Syrians can look into his eyes”.

To look into the eyes of a torturer and not look away is freedom - freedom from fear.

In part 4, Mansour will describe the importance of this trial.