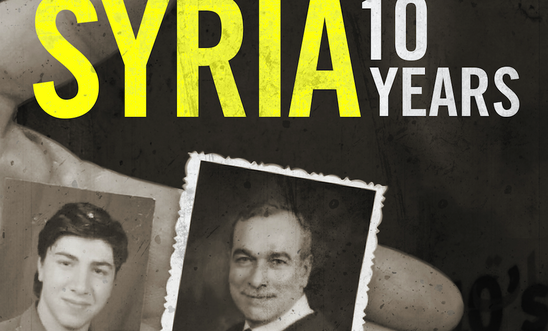 Ten years after the start of the Syria uprising, tens of thousdands of people are still missing or have been disappeared. © Amnesty International

It is not uncommon to hear commentators say, "Assad has won". But what did Assad win?

All the things that led to Syria’s momentous uprising in March 2011 - poverty, corruption, repression, mismanagement, and most crucially, crushing injustice and impunity - are now all much worse ten-years on than they were back then.

There are no signs this abysmal trend will reverse any time soon. On the contrary, the country is now synonymous with death, destruction, and despair. The economy is collapsing as the regime’s ‘brand’ is rightly seen as too toxic for investment.

The majority of people in Syria are suffering the consequences. At the same time, the regime's leadership, uncaring and devoid of any ability to reflect on the negative impacts of their catastrophic actions, prepare for yet another pantomime election this year.

Ending the chronic impunity enjoyed by those who have ordered atrocities is a key route out of the crisis. Recovery, reconstruction, and justice are dependent on this. However, despite their stated commitments towards ‘supporting Syria’, Russia and China continue to block all such initiatives, at least at the UN Security Council level.

The regime, obsessed with self-preservation for itself and the small elite that feeds off it, is blind to how these two authoritarian states have helped to condemn the country and its beleaguered population to these years of horrors. This callous behaviour was most notable in May 2014 when they abused their Security Council vetoes and voted against referring Syria to the International Criminal Court.

There have, of course, been many crucial moments in the past tumultuous decade for Syria, but that day in late May 2014 was one of the most significant. That Security Council resolution, if passed, would have allowed the Hague court to investigate war crimes and crimes against humanity committed by all sides of the conflict and would have sent a powerful message that belligerents could no longer commit atrocities with impunity. A positive vote would have created a strong deterrence effect with international legitimacy.

It was not to be. We see that fateful day's results in the destroyed hospitals, broken bodies, grieving mothers, and the sad wreckage that is Syria in 2021.

But the Assad’s are still, for now, on their throne. The inability to reform, the massacres, the industrial-scale torture, and the lack of adequate punishment have guaranteed that. But look at the cost. It has devastated the majority of Syria and cemented the regime's pariah status and all that goes with that, including being a failed state. If this is a victory, it is a truly unique one.

Towards a Decade of Justice?

But while the regime and its backers eviscerate the country, brave Syrian human rights activists continue to fight for justice.

Yes, there has been immense injustice, loss, and despair over the past ten years, with so many brave activists being disappeared, tortured, or executed. It’s a heavy pain, but so many Syrian human rights defenders tell me it gives them the motivation to keep working.

Last month, the ex-Syrian regime intelligence official Eyad al-Gharib was found guilty by a court in Koblenz in Germany of aiding and abetting the torture of detained protesters in Damascus, the first case of its kind. This verdict was a truly historic moment in the long campaign for justice and was a significant victory for many victims, witnesses, investigators, campaigners, and human rights lawyers.

Of course, the guilty verdict and the Koblenz trial are just the beginning in what many people hope will be a decade of much more comprehensive justice for Syrians.There are more investigations ongoing, and there will be more trials. It is expected that there will be more guilty verdicts with much stiffer sentences than that received by al-Gharib - including in the case of Anwar Raslan later this year.

Achieving real justice for Syrians over the next decade will take a serious political and financial investment. States can and must do more, like adequately funding their war crimes units to focus on Syria. They could also follow Germany’s example by investigating and prosecuting individuals suspected of committing crimes under international law through their national courts under the principle of ‘universal jurisdiction’.

At the vanguard of this campaign are Syrian human rights organizations. They also need massive solidarity and financial support to continue their crucial work, ensuring crimes are documented, and more legal files are built for prosecution.

Collective effort will be crucial to ensuring Syria’s human rights community is strengthened and the forces of injustice are weakened. When we look back ten years from now, we want to be able to salute a genuine victory for Syrians - one that brings a smile, even though bittersweet, to every survivor's face.