The call that never came: how one Syrian torture survivor is refusing to let injustice crush him 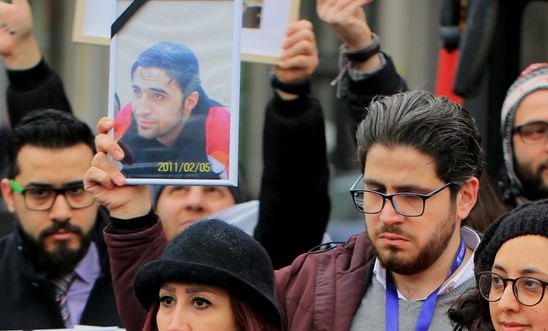 Ahmad Helmi with a picture of his friend, Islam Dabbas

“Make sure my phone is always charged in case Islam calls me” - that’s what Ahmad Helmi told his mother when she visited him in prison.

Islam Dabbas was Ahmad’s best friend. His companion from boyhood. They did everything together - listened to music together, smoked together, organised protests together. Ahmad had wanted Islam to be his best man when he got married.

Both were young, highly committed non-violence activists from Daraya, dreaming and campaigning for a better Syria. A future free from the nightmare that the Assad’s (father & son) and their corrupt and brutal governments had constructed.

Islam was arrested and forcibly disappeared by the Syrian authorities in July 2011, just four months into the uprising. For Ahmad, it was crushing and sometimes panic-inducing not knowing where his friend was or how he was being treated, given all he knew about the horrors of Assad’s jails and how human rights activists are routinely tortured.

Even though Ahmad had not heard from Islam since he was arrested, he was desperate for information about him, and for Islam to know where he was. His mobile phone was always charged and every time it rang, he hoped it was his friend. He waited 18 months for a call. Then Ahmad was himself snatched by regime forces in late 2012. Ahmad was arrested for helping run an underground medical network treating people shot & brutalised by regime forces or their proxies. Ahmad himself had been shot in the face by a regime sniper in April 2011 but, after a great deal of pain and some difficult treatment, he’d carried on, undeterred.

When Ahmad was released in late 2015 - after spending three years in nine different prisons and being tortured throughout - he continued to wait for the call which he’d been dreaming about.

There was no call from Islam.

Instead, in June 2018, nearly three years after Ahmad was released and seven years since he last saw his old friend, Ahmad received the news he’d most feared. Islam had been executed in Saydnaya prison, Assad’s notorious death camp, in 2013. Ahmad was devastated.

Earlier this year, Ahmad and his fellow survivors (from the Ta’afi initiative which he helped establish) went to a retreat in Mersin in the south of Turkey. There they were encouraged to address their painful traumas. To find some kind of closure. Ahmad wrote a letter to Islam. He told him he was sorry that he hadn’t been able to protect him. He was sorry he couldn’t keep the revolution peaceful. Ahmad told Islam he was sorry he couldn’t look after the rose garden - their code for the peaceful revolution they were both nurturing.

Ahmad broke down in tears as he recalled the memory of hearing of Islam’s execution. It is a pain which is unlikely to ever leave him.

As we finish our tea, we know we have a lot of work ahead of us to do justice to the life of Islam and all the other young human rights activists Assad’s forces targeted for extermination in the early days of the uprising.

Ahmad will never see Islam again, but he did get married and he is still doing good and helping others. He now devotes his time to ensuring survivors of torture and enforced disappearance  - people like himself - are not crushed by guilt and bitterness. Instead, they’re learning to channel their anger and sadness into helping to bring justice to Syrians through the Ta’afi initiative. It’s a remarkable effort by people who’ve suffered so much physically and psychologically. They’re still finding the energy to support other survivors of political detention upon their release, so that they can continue to peacefully support human rights change in Syria.

The work Amnesty are doing in Turkey with Ahmad and his colleagues can’t bring back Islam or the many other executed human rights activists like him. But it will ensure that Ahmad and his fellow survivors enter 2020 even more focused on bringing their tormentors and torturers to justice. That, at least, would be an important tribute to Ahmad’s lost friend, Islam Dabbas.