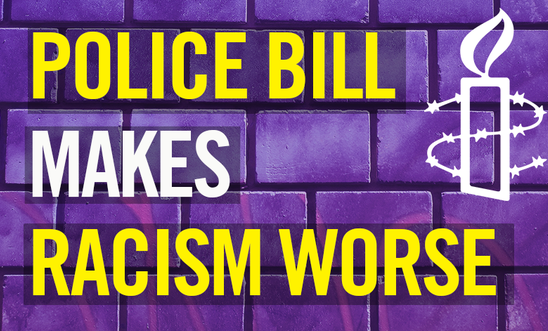 Last year the UK Parliament’s Human Rights Committee conducted the first ever poll of Black people in the UK about their human rights. The results were stark: Over 85% of Black people are not confident that they would be treated the same as white people by the police.

This is not just a problem of perception. The history of policing in Britain has often been interlinked with racism. Over decades, the UK civil rights movement has highlighted some of the most acute abuses. These include the ‘sus laws’ which allowed police to stop people for ‘looking suspicious’ - widely acknowledged to have been used in a racist way, the police response to the murder of Stephen Lawrence which led to the official recognition of institutional racism in the Metropolitan Police, as well as ongoing revelations about the use of undercover ‘spy cops’ against racial justice campaigners.

But the problems aren’t only things of the past. Black people in the UK experience death disproportionately during or following police contact, especially within police custody and detention. Black people are also disproportionately subjected to Taser use. In 2016, there were widespread calls for an urgent review into Taser use following a series of fatal incidents, including the killing of footballer Dalian Atkinson. In 2017, police in Bristol Tasered one of its own race relations advisers, before targeting him again the following year.  Last year in 2020, those Tasered included Millard Scott, a 62-year-old civil rights activist, who was fired on as he stood on a staircase inside his home.

Although the ‘sus laws’ were scrapped in the 1980s, they were replaced by today’s ‘Stop and Search’. Before Covid-19, Black people in England and Wales were 40 times more likely to be stopped and searched. During the first national lockdown, young Black men were stopped and searched by police more than 20,000 times. This is made worse by policing tools such the Metropolitan Police’s racially biased ‘Matrix’ database. Since then, following a campaign, some of the people who should never have been on the database have been removed from it, but the fundamentals remain in place.

Nor is any of this divorced from policy relating to immigration - itself an area in which racism and its impact are deeply rooted. This and other police data is used to deprive British people of their citizenship rights for the purpose of exiling them to places they may not know or even have been. Similar injustice and violence resulting from police and immigration collaboration can range from the intimidating practice of police asking people their immigration status, to survivors of domestic abuse being denied support by the state, or even threatened with deportation instead of being helped.

Many of these issues were raised during the Black Lives Matter protests last year. But in some places they were met with suppression: in Belfast, unjust fines were used to try and prevent them going ahead at all.  In London, police horses were used to charge against protesters, a policing tactic which is never OK, which led to a number of people being injured.

Until and unless racial injustices are addressed, it is likely that extensions of police powers will make the effects of racism worse.

The proposed ‘Police, Crime, Sentencing and Courts Bill’ (Police Crackdown Bill) doesn’t tackle racism. Instead it would almost certainly exacerbate its effects. The proposals provide both police and Government ministers the powers to ban, limit or impose conditions on peaceful protests. Other parts of the Bill would make stop & search even worse, increase powers to collect and share information, and discriminate against Gypsy, Roma and Traveller communities. All of this would entrench institutional racism within the criminal justice system.

The Bill needs to be dropped

Hundreds of groups, including Amnesty International, are calling for the Bill to be dropped. If the Bill proceeds, we are calling in particular for the removal of Parts 3 and 4 of the Bill that relate to protest and the right to roam. We will similarly be urging parliamentarians to remove measures relating to enhanced stop and search powers and data gathering and sharing requirements, which if enacted would likely increase structural racism and discrimination in the criminal justice system.