10 reasons why the Government needs to drop the Policing Bill 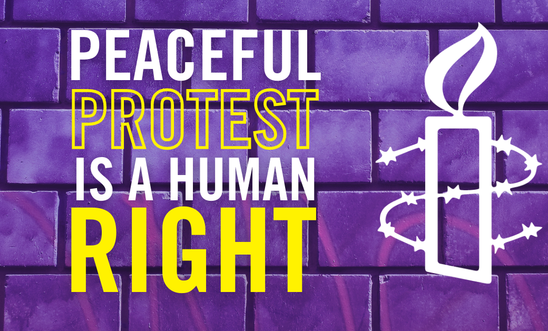 Peaceful protest is a human right

You might have heard about the controversial ‘Police Crackdown Bill’ currently being discussed in the UK Parliament. But what is it and why is Amnesty - alongside many others - opposing it?

The Bill covers a huge number of things, many of which have been heavily criticised by different sectors. In a nutshell it puts too much power in the hands of the Government Ministers with not enough checks and balances to prevent those in power from harming people.

Below, we’ll boil it down to the essentials.

1) It would entrench racism

Research by the UK Parliament’s Joint Committee on Human Rights shows that 85 % of Black people in the UK are not confident that they would be treated the same as a white person by the police.

Black people are more likely to be Tasered, to be stopped and searched and experience death in custody. Increasing policing powers without addressing racism will not address the entrenched racism and discrimination faced by racial and ethnic minorities across the country. ​

The Bill includes greater police powers to enhance stop and search– a police tactic already used disproportionately against people of colour. The structural inequalities in the criminal justice system need to be dismantled not re-built.​

3) It seriously restricts the right to protest

The right to protest is fundamental to a free and fair society. In its current form, the Police Crackdown Bill represents an enormous and unprecedented extension of policing powers which would effectively give both police and Government ministers the powers to ban, limit or impose undue restrictions on peaceful protests, on the grounds that they might be ‘noisy’ or cause ‘annoyance’.

The right to freedom of peaceful assembly requires that protesters are able to have a real opportunity to peacefully convey their message to the right people, group or organization and as a general rule should be facilitated within the “sight and sound” of their target audience.

But part of this Bill creates an extended buffer zone around Parliament, and more generally could be used to only ‘allow’ protests far away from what they are protesting about.

This makes a mockery of the right to protest.

Our right to peaceful assembly, enshrined in international human rights law, can only be restricted in very limited circumstances when it is clearly established that it is deemed to be both necessary and proportionate to a legitimate aim.

Many measures in this Bill are neither proportionate nor necessary, and some are not even legitimate. Police already have wide-ranging powers to manage public order and prevent public assemblies from causing serious harm.

This Bill sets out to crackdown on explicitly nonviolent dissent - a form of protest that is clearly protected by the rights to freedom of expression and peaceful assembly.​

Could you imagine being threatened with arrest by police for standing on a pavement with a placard? In reality, this already happens much more than many realise, but this Bill would make this practice even more widespread, and make the possible sanctions more severe.

And it wouldn’t only be organisers - the Bill would target anyone who participates on the basis that they “ought to have been aware” of any restrictions, conditions or prohibitions placed on any given event.

The thresholds in the Bill to be applied to policing actions are vague, undefined and open to such wide-ranging and discretionary interpretation that they would almost certainly give rise to even more inconsistent, arbitrary and discriminatory approaches to how protests and demonstrations are managed.

To make matters worse, it provides a blank cheque to present and future Home Secretaries to make the powers even more draconian.

7) It could lead to more violence

We have seen elsewhere how when the police use unlawful force in response to otherwise peaceful protest, this can prompt violent reactions. This is not the way to facilitate the right to peaceful assembly and ensuring people’s voices are being heard.

8) It criminalises our freedom of movement

The Bill contains severe restrictions on the right to roam, flagrantly targeted against Gypsy and Traveller communities who could see their entire way of life criminalised.

If passed, these laws could well be used even more widely – against ramblers, cyclists, homeless people or protesters using nonviolent tactics like occupations, peace camps or sit-ins to challenge injustice.

9) We could see Prisoners of Conscience in the UK

The Bill places a vague and foreboding offence of causing a "public nuisance", with a severe sentence of up to 10 years for actions which, as currently written, could include such ordinary aspects of protest as non-violently obstructing things or causing “serious annoyance or inconvenience”.

Nonviolent protesters have sometimes faced prison terms in the UK, but it is unusual. This Bill could change that and lead to the likelihood of human rights activists being imprisoned solely for their peaceful exercise of their human rights and becoming prisoners of conscience in the UK.

10) The Bill needs to be dropped

With hundreds of other groups, Amnesty International is calling for the Bill to be dropped. Any welcome provisions in it that there are could be delivered through different legislation.

If the Bill proceeds, we are calling in particular for the removal of Parts 3 and 4 of the Bill that relate to protest and the right to roam. We will similarly be urging MPs to remove measures relating to enhanced stop and search powers and data gathering and sharing requirements, which if enacted, would likely increase structural racism and discrimination in the criminal justice system.​

We cannot allow this to happen.

Take action now and call on our Prime Minister to stop the assault on our freedoms.