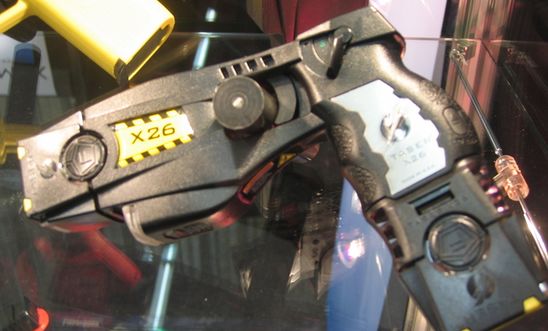 A robust parliamentary inquiry into the police use of Tasers is urgently needed, said a leading body of rights-based agencies today following the death of 48-year-old Dalian Atkinson for which two West Mercia police officers are under criminal investigation.

This latest incident follows a series of other controversial cases involving the police use of Taser, including the tragic death of 23-year-old Jordon Begley, in which an inquest ruled that use of Taser and restraint had materially contributed to his death.

Writing to Keith Vaz MP chair of the Home Affairs Select committee, Amnesty International, Children’s Rights Alliance, the Omega Research Foundation and University of Exeter researcher called for a Home Affairs Select Committee Inquiry into whether existing safeguards on Taser use are sufficient, including policy guidance on when Taser can be used, sufficient training to officers and scrutiny and accountability mechanisms.

This is particularly vital in the context of an increasing number of UK police officers who use Tasers across the UK and known risks associated with exposure to Taser, particularly against vulnerable groups such as children or those with underlying medical conditions or mental health concerns.

“Following a series of tragic incidents, serious questions must now be asked. We need a thorough investigation to determine whether these weapons are being used properly and responsibly, particularly given the increasing number of these weapons on our streets.

“Tasers can be a valuable tool, but they are extremely dangerous and can kill, especially when misused. This is why it’s important that there is absolute clarity in when and how these weapons are used and the toughest and highest professional standards in place to train, monitor and evaluate its use.”

Abi Dymond, an ESRC funded researcher at the University of Exeter said:

“It is important to ensure that the training and policy around Taser - and, indeed, all police use of force - is striking an appropriate balance between enabling officers to use their discretion, and giving them sufficient guidance on when its use is appropriate.
“It is also important to ensure that, once Taser has been used, robust accountability mechanisms are in place, both inside and outside the force in question.  There’s a real need for an informed, transparent discussion on these important topics – and, as such, a Home Affairs Select Committee Inquiry would be most welcome.”

Forty-eight-year-old former footballer Dalian Atkinson died after being shot with a Taser by police at his father's house on Monday 15 August. Mr Atkinson went into cardiac arrest on his way to hospital.  The IPCC is currently investigating the case.
As part of the review, the coalition of agencies call for consideration to be given to the following concerns:

“Dalian Atkinson’s sad death should act as a wake-up call to the Government on the use of Tasers on everyone, especially vulnerable people such as children or those with mental health issues.  Just two months ago, a UN body called on the UK to prohibit the use of Tasers on children. Tasers cause intolerable pain. We know through our work with children and young people that even being threatened with a Taser by a police officer is extremely distressing – and this is happening to children as young as 11. Taser use on children must be banned. At the very least, the regulations, training, and transparency around the use of Taser on children must be significantly improved.  “