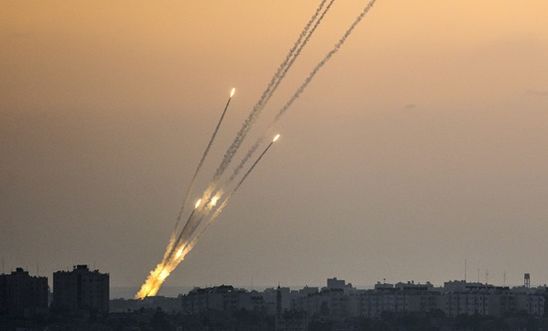 ‘When I awoke, I found my daughter [11] lying in the doorway bleeding… I didn’t think about calling an ambulance because they will not enter the village. I decided to take her to the hospital in my own car. On the way to the hospital, both girls lost consciousness.’

Atiyah al-Wakili, survivor of a rocket attack on an unrecognised village in Israel

During July and August 2014, Hamas and other Palestinian armed groups fired thousands of unguided rockets and mortars towards Israel.

These unlawful attacks endangered Israeli and Palestinian civilians, who once again bore the brunt of the third full-scale war in six years.

It was 11am when a rocket launched inside the Gaza Strip landed in the yard next to Ouda’s home in a Bedouin village in Israel.

No ambulance came to take them to the hospital, so his family had to use their own cars.

Ouda’s wife Khitam and their three-month-old daughter Aya survived the attack, but Aya was seriously wounded.

Ouda did not survive – he was one of six civilians, including one child, killed in Israel as a result of rocket and mortar attacks by Palestinian armed groups.

Direct attacks on civilians and indiscriminate rocket fire are both war crimes.

One horrific incident where 11 Palestinian children and 2 adults were killed in the al-Shati refugee camp by a rocket fired from Gaza demonstrates the full extent of this indiscriminate fire.

If the missile is confirmed to be Palestinian, it would mean that attacks launched by armed groups killed more civilians inside Gaza than in Israel.

Poor protection from the government

Bomb shelters, advanced warning systems, and Israel’s Iron Dome missile defence system helped limit civilian casualties in many areas of Israel. But this protection is not offered to all residents equally.

Bedouin communities like Ouda’s are barely recognised by the Israeli government. They don’t have access to bomb shelters, defence systems or warning sirens.

‘Even if you wanted to take control of your own life and build your own bomb shelter, the authorities would demolish it as an illegal structure.’

Ouda’s relative told us that, like many Bedouin families, the governments had a demolition order against Ouda’s house – so by destroying it, the perpetrators had actually assisted the Israeli government.

‘During the war, the IDF [Israeli Defence Forces] used the Iron Dome to protect the [Jewish] Israeli population. However, when the rockets were going to land in our villages, they treated it as if it were an open area. This fact was recognized by the IDF itself.’

Sana Ibn Bari, a lawyer working with the Association for Civil Rights in Israel (ACRI)

War crimes by both sides

There are no bomb shelters or warning systems in Gaza and nowhere was truly safe during the hostilities – even emergency shelters came under fire.

Yet human rights violations by one party cannot justify violations by its opponents. This perverse logic has helped perpetuate the cycle of destruction, as civilians continue to pay a heavy price.

After 20 years of failed peace process, it’s time to put an end to the violence.

We’re urging both sides to co-operate with independent, international investigations into the crimes committed last summer.

We want to see the Palestinian authorities:

Israel must allow Amnesty and other human rights organisations access to Israel, Gaza and the State of Palestine so we can investigate all suspected violations. We’re also calling on Israel to:

We’re also calling on governments around the world to stop the flow of arms to Israel and Palestinian armed groups.

Downloads
Unlawful and deadly: Rocket and mortar attacks by Palestinian armed groups during the 2014 Gaza/Israel conflict
Families under the rubble: Israeli attacks on inhabited homes (PDF)
Nothing is immune: Israel's destruction of landmark building in Gaza (PDF)