Protect the Protest: Amnesty warns against allowing those in power to make protest a crime 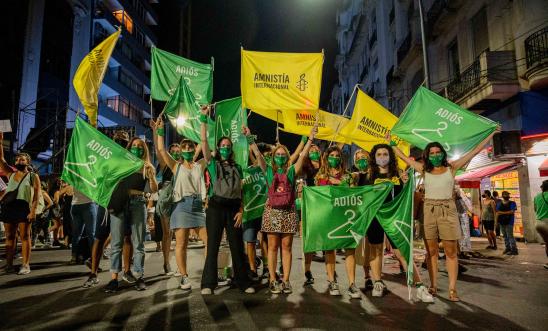 In response, governments around the world have moved to criminalise protest

‘Protest is meant to be noisy, it’s likely to be annoying and it’s vital for a healthy democracy. We allow those in power to make protest a crime at our peril’ - Sacha Deshmukh

The right to protest is under unprecedented and growing threat across the world, Amnesty International said today, as the organisation launched a new global campaign to confront governments’ widening and intensifying efforts to erode the fundamental human right.

From the climate crisis to systemic racism and gender-based violence, a multitude of issues have made collective action more necessary than ever.  But from the UK to Russia, France to Senegal, Iran to Sri Lanka, authorities are implementing an expanding array of measures to suppress organised dissent.

Amnesty’s Protect the Protest campaign will challenge attacks on peaceful protest, stand with those targeted and support the causes of social movements pushing for human rights change.

“In recent years we have seen some of the biggest protest mobilisations for decades. Black Lives Matter, MeToo, and the climate change movements have inspired millions the world over to take to the streets.

“Almost without exception, this wave of mass protest has been met with obstructive, repressive and often violent responses by state authorities.

“Instead of facilitating the right to protest, governments are going to ever greater lengths to quash it. This is why, as the world’s biggest human rights organisation, we have chosen this moment to launch this campaign.

“It’s time to stand up and remind those in power of our inalienable right to protest, to express grievances, and to demand change freely, collectively and publicly."

Draconian legislation in the UK

Last month, the UK’s Policing legislation came into force, giving the police and government ministers wide-ranging powers to clamp down on protest including the ability to ban “noisy protests”.

Before this law was introduced, police were required to show that a protest may result in "serious public disorder, serious damage to property or serious disruption to the life of the community" if they wanted to shut it down. Now, police chiefs can impose a start and finish time, set noise limits and can apply these rules to a protest by just one person. Government ministers have also been given wide ranging new powers in these areas to further clamp down on rights to protest that could see ministers attempting to shut down protest and opinions it simply doesn’t agree with.

Disturbingly, the new law makes it a crime not to follow police restrictions protesters “ought” to have known about - even if they had not been given an explicit order from a police officer. These types of restrictions are likely to have a serious chilling effect in dissuading people from joining protests in the first place to prevent them from enjoying their fundamental right to express themselves and associate freely with others.

To make matters worse, the Government is currently trying to push through another piece of legislation - the Public Order Bill – in a bid to top up elements of the Policing legislation that were rejected by the House of Lords in their previous attempt. This Bill would further expand policing powers, with wide-ranging new grounds for using stop and search powers, as well as a protest banning order to prevent people from joining protests entirely and to criminalise “locking-on” as a legitimate protest tactic.

“Locking on” to another person or object – using something like superglue or a bicycle lock - and causing disruption would be classed as a criminal offence, as could the mere act of linking arms in solidarity. Alarmingly the Bill also proposes that carrying such items could be deemed a criminal offence. These measures will inevitably encourage the rapid further expansion of police intelligence gathering and surveillance on a range of social and political movements.

“From the anti-slavery movement to the suffragettes; from Stop the War protests to Fridays for Future: the UK has a long and proud history of protest. People Power has always been celebrated, tolerated and even facilitated in Britain and has helped forge the society we live in today.

“Never before has a UK Government been so hell-bent on crushing dissent that they have moved to criminalise so many aspects of peaceful protest.

“It’s completely shameless that the worst excesses of the Policing legislation, mercifully edited out by the Lords, are being repackaged and served up for another try in this Public Order Bill. This is an administration who knows a long period of discontent is coming and are gearing up for that by gagging ordinary members of the public from raising their concerns.

“Protest is meant to be noisy, it’s likely to be annoying and it’s vital for a healthy democracy. We allow those in power to make protest a crime at our peril.”

Emergency powers in the wider world

Governments are also increasingly using emergency powers as a pretext to clamp down on dissent. This was seen at the height of the Covid-19 pandemic in countries including Greece and Thailand, while in the Democratic Republic of Congo, a government-imposed ‘state of siege’ has provided military and police officers with extensive powers to restrict protest in the provinces of Ituri and North Kivu since May last year.

Authorities globally are also justifying restrictions by arguing that protest constitutes a threat to public order - branding activists “troublemakers”, “rioters” or even “terrorists”.

This approach was witnessed in Hong Kong, where the National Security Law and its expansive definition of “national security” have been used arbitrarily, among other things, to restrict protest. And, in India, the anti-terror Unlawful Prevention (Activities) Act (UAPA) and the crime of “sedition”, have been used repeatedly against peaceful protesters, journalists, and human rights defenders.

While governments have long relied on aggressive tactics to police protests, security forces have increased the amount of force they use in recent years.

During the mass uprising that followed the 2021 coup in Myanmar, the military used unlawful lethal force against peaceful protesters. More than 2,000 people have been killed, according to monitors, and more than 13,000 arrested since the military seized power.

People who face inequality and discrimination, whether based on race, gender, sexual orientation, gender identity, religion, age, disability, occupation, social, economic or migratory status are also more affected by restrictions on their right to protest and face harsher repression.

In countries including Sudan, Colombia and Belarus, women have been sexually assaulted for participating in protests, while in Turkey, for example, Pride marches have been banned for years including this year.