How much would you risk for basic women’s rights? 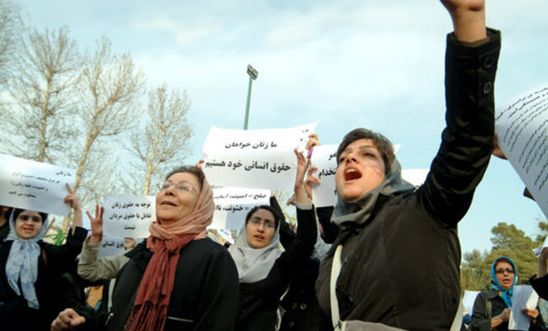 Here in the UK and in my home country, USA, women are often put in positions in which our physical safety and bodily autonomy are at risk, but at the same time, we haven’t really had to fight for our rights in the way many other women and girls around the world are right now. It’s all too easy for us to take for granted the fact we can legally drive a car, or choose to show or cover our heads, depending on our personal beliefs and preferences. The same can’t be said for women, girls and other AFAB (assigned female at birth) people in countries like Iran and Saudi Arabia, where standing up for women’s rights can land you and your families in prison, tortured, disappeared, or worse.

In Saudi Arabia, women were able to celebrate somewhat of a victory, with the lifting of the decades old driving ban. However, some of the women activists who were instrumental in achieving this victory continue to face charges, and others remain in prison. Meanwhile, the Crown Prince Mohammad bin Salman is taking full credit for the lift, as one of his ‘visionary reformist policies’.

Despite the fact that many of these women activists are completely aware of the risks they face, in an atmosphere of escalating crackdowns on women’s rights defenders, they persist. Most of us will never have to pay the sort of price these women activists have. For them, even in the face of torture, they know they truly deserve to be equal.

In Iran, a growing movement has emerged against discriminatory and abusive forced veiling laws. Women and girls stand in public places, silently waving their headscarves on the ends of sticks, and share videos of themselves walking down the street with their hair showing. This may not seem all that radical to some here in the UK, but in Iran the consequences for these peaceful protests are severe. These are courageous women that deserve to be celebrated and respected for their strength, but as it stands, they need your support to simply earn their freedom.

Iranian authorities have responded to the increasing strength of the anti-forced veiling movement by waging a crackdown against women’s rights defenders. In an official statement on 23 February 2018, police warned that women peacefully protesting the discriminatory and abusive practice of forced veiling would now be charged with “inciting and facilitating corruption and prostitution”, which carries a maximum sentence of 10 years in prison.

While the consequences of protesting Iran’s forced veiling laws involve lengthy prison sentences, ill-treatment and torture, many Iranian women continue to make a stand against these unfair and discriminatory laws, rooted in sexism. The movement includes White Wednesdays and My Stealthy Freedom, which encourage Iranian women to share pictures of themselves without headscarves online, and My Camera My Weapon, which aims to raise awareness of the constant harassment and assault women and girls face on Iran’s streets as a result of forced veiling laws.

A year ago, on international Women’s Day, 8 March 2019, Monireh Arabshahi, Yasaman Aryani, and Mojgan Keshavarz shared a video that went viral, in which they, without their headscarves, gave flowers to women on a metro train in Tehran, while discussing their hopes for women’s rights in Tehran.

In the video, Yasaman hands a flower to a woman wearing a hijab, saying she hopes that one day they can walk side by side in the street, “me without the hijab and you with the hijab” – a goal that we in the UK and USA should still be striving for ourselves  – A few weeks later, on 10 April, Yasaman was arrested. Her mother Monireh was arrested the following day, when she attempted to get information about her daughter’s whereabouts. Mojgan was arrested later, on 25 April 2019, at her home, in front of her nine-year-old daughter. 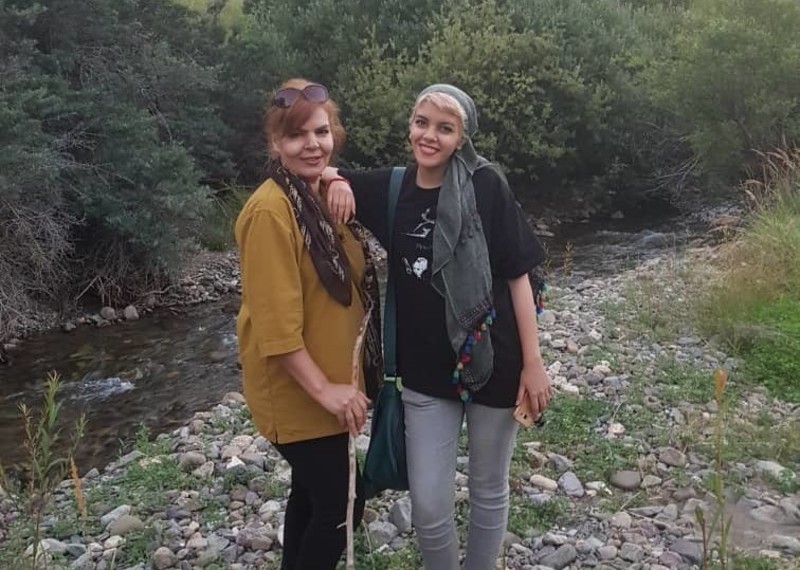 Yasaman was only 24 at the time of her arrest and has since been sentenced to 16 years in prison, as has her mother. Mojgan was sentenced to 23 years and six months in prison. All three prison sentences consist of a one-year term for “spreading propaganda against the system”, a five-year term for “gathering and colluding to commit crimes against national security”, and a ten-year term for “inciting and facilitating corruption and prostitution” through promoting “unveiling”. Mojgan’s sentence includes an additional term of seven years and six months for “insulting Islamic sanctities”.

Yasaman is not the only young Iranian woman facing a serious sentence for her activism – at just 21-years-old, Saba Kordafshari has been sentenced to 24 years in prison for campaigning against Iran’s discriminatory forced veiling laws. When I was her age, I was attending rallies and protests, but would I have been able to stare down the genuine prospect of torture for my family and myself? These are questions we will hopefully never have to seriously ask ourselves, but for many women human rights defenders, like Saba, they are constant. 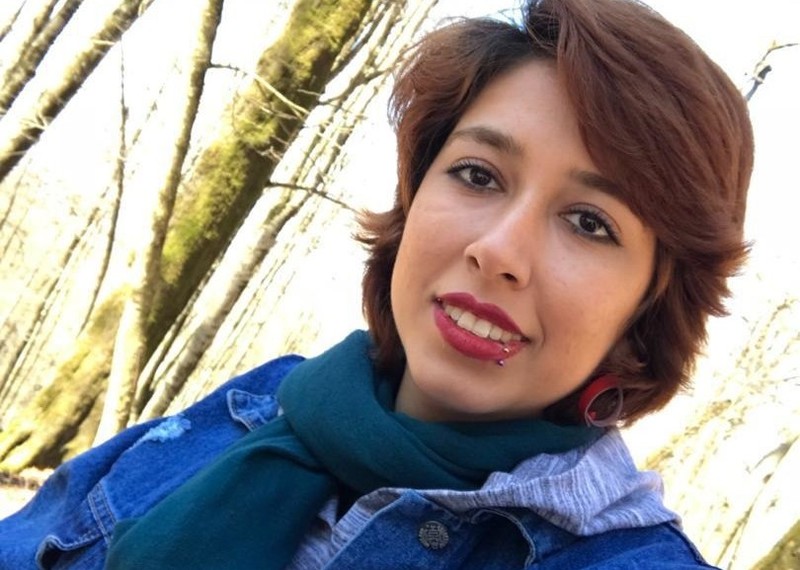 When Saba was arrested on 1 June 2019, agents handcuffed her mother and confiscated Saba’s mobile phone and laptop. Saba was then held in prolonged solitary confinement for 11 days and questioned about her communications with the Human Rights Activists News Agency (HRANA), an Iranian human rights group – including information she had sent HRANA about prison conditions. The information was given to Saba by prisoner of conscience, Alireza Shirmohammadali. Alireza was murdered in Fashafouyeh Prison on 10 June 2019.

Saba has faced continuous pressure to denounce the White Wednesdays campaign and its founder on camera. While being subjected to enforced disappearance for 12 days, Saba was put under renewed pressure to “confess”, with interrogators threatening to arrest her mother if she did not “co-operate”. On 10 July 2019, they carried out their threat and arrested her mother, Raheleh Ahmadi. Saba told her family that she was held in an interrogation room with a sack over her head blocking her sight, when suddenly she heard her mother being interrogated nearby. She was then forced to give a “confession” on camera. Her mother was released on bail on 14 July 2019. Saba remains in prison. 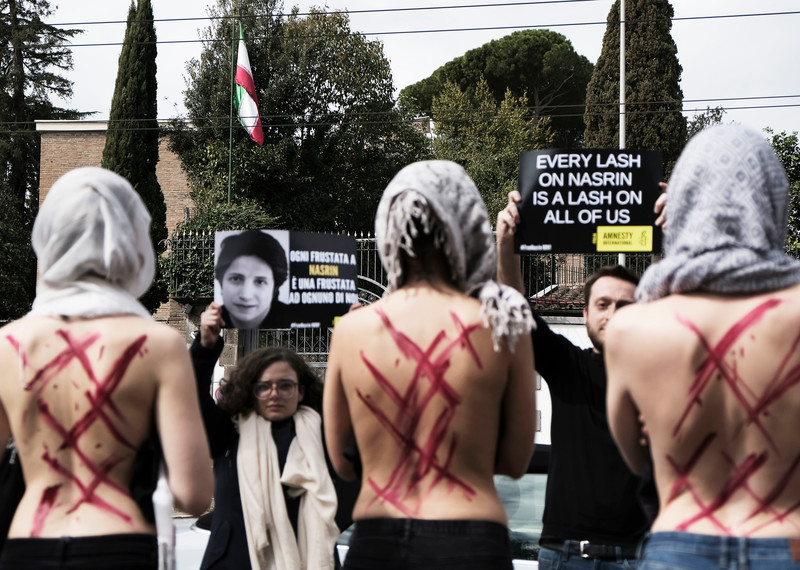 Italian flash mob for Nasrin at Iranian embassy in Rome.

Prominent Iranian human rights lawyer, Nasrin Sotoudeh, was given the harshest sentence recorded against a human rights defender in Iran in recent years, suggesting that authorities are stepping up their repression. Nasrin was sentenced to 38 years in prison and 148 lashes after two grossly unfair trials, which she wasn’t even allowed to attend. For standing against forced veiling laws, Nasrin was charged with “inciting corruption and prostitution” and “openly committing a sinful act… by appearing in public without a hijab”. The evidence provided against her during her trial included: removing her headscarf during prison visits and giving interviews about the violent arrest and detention of women protesting against forced hijab.

In September 2016, Nasrin was sentenced to five years in prison in a separate case. She was not present during the trial or conviction, because authorities said she was not wearing “appropriate” Islamic dress and refused her entry. She was charged with “spreading propaganda against the system” and “gathering and colluding to commit crimes against national security”. In breach of procedure, the judge also charged her on an additional charge of “assisting in hiding spies with the intent to harm national security”, using her legitimate activities, such as her meetings with foreign diplomats, to convict her. This case is now pending review before an appeal court.

Although the Crown Prince has branded himself as a ‘reformer’, the crackdown on human rights defenders in Saudi Arabia has gotten worse since his appointment, with activists being detained, tried and sentenced to lengthy prison terms for their human rights work. Many of the women activists brought to trial have campaigned against the long-standing ban on women driving in Saudi Arabia, and for the end of the male guardianship system. These peaceful women’s rights defenders may now face up to 20 years in jail for their work on dismantling the decades-old driving ban.

In May 2018, the Saudi Press Agency reported that seven people had been arrested for “suspicious contact with foreign entities”, “recruiting people working in sensitive government positions”, and “providing financial support to hostile entities abroad with the aim of undermining the security and stability of the Kingdom and shaking the country’s social fabric”. Among those targeted were prominent women human rights defenders, Loujain al-Hathloul, Iman al-Nafjan and Aziza al-Yousef. Aziza’s son, Salah al-Haidar, has since been arrested for his activism as well. 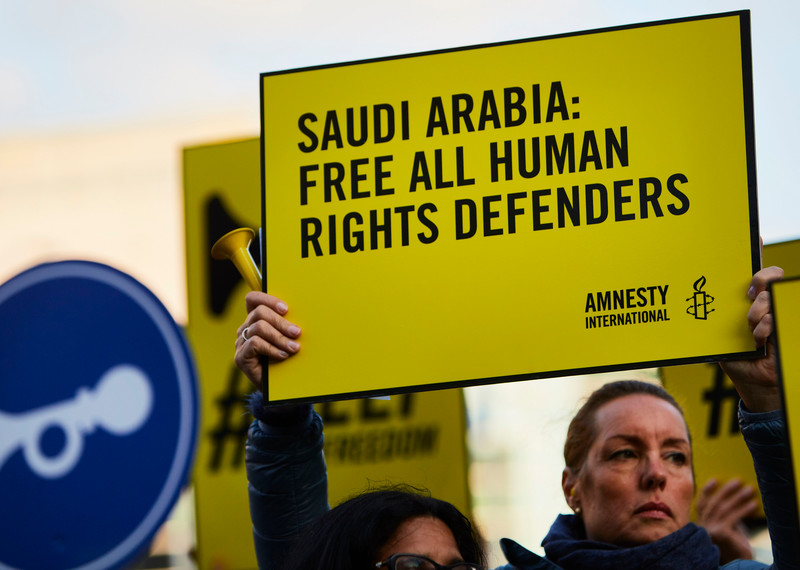 For the first 10 months of their detention, the women activists were held without charges. They were also held incommunicado, with no access to their families or lawyers for the first three months of their detention. During their first trial session on 13 March 2019, several of the women activists were charged with contacting international organisations, including Amnesty International. On 19 May, the Saudi Press Agency reported that seven individuals had been arrested for their “suspicious contact with foreign entities”, “recruiting people working in sensitive government positions” and “providing financial support to hostile entities abroad with the aim of undermining the security and stability of the Kingdom and shaking the country’s social fabric”.

Since the trials began, several women activists have told the court that they were tortured, ill-treated and sexually abused during the first three months of their detention. The Public Prosecution has denied these allegations. Diplomats and journalists have been consistently banned from attending the court sessions. (See Press Release: Saudi Arabia: Reports of torture and sexual harassment of detained activist)

Please continue to offer your support and bring awareness about the punishments these brave women face.

For the Iranian women’s rights defenders, we suggest targeting Iran’s Supreme Leader (@khamenei_ir) and Minister of Foreign Affairs (@JZarif) on Twitter as they are both regular users.

You may also tag Yasaman in solidarity: @yasamanaryani95.

For the Saudi women’s rights defenders, you can target Social media target: @KingSalman.