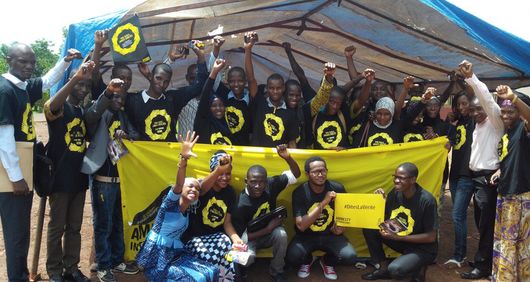 Five pro-democracy activists, Alseny Farinta Camara, Moussa Sanoh, Boubacar Diallo, Thierno Seydi Ly and Thierno Oumar Barry, were released on 19 December 2019 in Kindia, western Guinea. Charged with participation in an unauthorised gathering, three of the five activists were given a four-month sentence, including a three-month suspended sentence. The two other activists were acquitted and released.

Alseny Farinta Camara, Boubacar Diallo and Moussa Sanoh were released on 19 December 2019 after being handed a four-month sentence, including a three-month suspended sentence, by the Tribunal of Kindia in Guinea. Thierno Seydi Ly and Thierno Oumar Barry were acquitted and released. The five members of the pro-democracy coalition National Front for the Defence of the Constitution (FNDC in French) had been detained for 36 days and charged with participation in an unauthorised gathering. Having spent more than one month in prison, they were released on the same day. Their lawyer filled an appeal against the judgement.

After his release, Alseny Farinta, local coordinator of FNDC in Kindia, told an Amnesty International staff member, "The first days of prison were difficult, but with pressure from media, national and international organisations like Amnesty, the situation gradually improved. Thank you once again for the support".