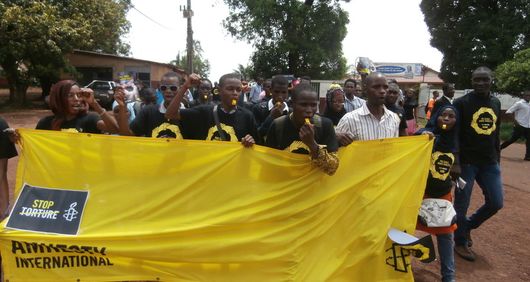 Five pro-democracy activists, Alseny Farinta Camara, Moussa Sanoh, Boubacar Diallo, Thierno Seydi Ly and Thierno Oumar Barry, were arrested on 14 November 2019 in Kindia, western Guinea, and charged with participation in an unauthorised gathering. They are all members of pro-democracy coalition, National Front for the Defence of the Constitution (FNDC in French). Two of the activists require medical attention.

On 12 November, the mayor of Kindia banned a demonstration by the National Front for the Defence of the Constitution (FNDC), scheduled for 14 November, because it was happening at the same time as a ceremony being held by the local authorities. The local coordinators of FNDC decided there was no reason for this decision and that they would carry on with their protest.

At least 25 activists, including members of FNDC, have been arrested since 14 November in Kindia and Conakry, also in western Guinea, during protests against the revision of the constitution in Guinea.

FNDC is a joint-group, consisting of non-governmental groups and opposition parties, who started national demonstrations against the potential revision of Guinea's constitution. Since FNDC announced the first protests, at least 16 protesters and bystanders have been killed during demonstrations between 12 October and 14 November. Leaders of pro-democracy movements and scores of protesters have been arrested and sentenced. On 22 October, five other FNDC national leaders, including the national coordinator, were sentenced to between six months and one year in prison.

Please write using your own words or the template letter provided in the attached documents, in French or your own language, to the listed address as soon as possible: