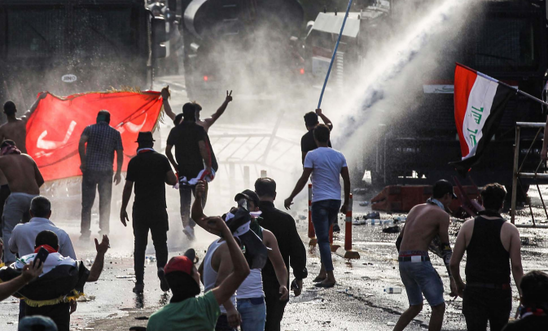 More than 500 protesters killed in Iraq, and 300-plus in Iran

Governments across the Middle East and North Africa crushed protests with ruthless force during 2019, said Amnesty International today, as it published its annual human rights report on the region.

Amnesty’s 76-page report also shows how the authorities across the region arrested and prosecuted activists for comments posted online, many in support of the protests. Amnesty recorded 367 human rights defenders subjected to detention (240 arbitrarily detained in Iran alone) and 118 prosecuted in 2019 - with the actual figures likely to be much higher.

The scale of the killings across the region has been shocking. In Iraq, at least 500 protesters have been killed, with the security forces - many snipers on rooftops - firing live ammunition and military-grade tear gas grenades.

In Iran, credible reports indicate that the security forces killed more than 300 people and injured thousands more between 15 and 18 November, using overwhelming force to crush protests initially sparked by a fuel price rise. Thousands were also arrested and many subjected to enforced disappearance and torture.

While the mass protests in Lebanon began largely peacefully, on a number of occasions they were met with unlawful and excessive force, and the security forces failed to intervene to protect peaceful demonstrators from attacks by supporters of rival political groups.

In Egypt, a rare outbreak of protests in September which took the authorities by surprise was met with mass arbitrary arrests, with more than 4,000 people detained. In Algeria, where large-scale protests led to the fall of President Bouteflika after 20 years in power, the authorities sought to quash protests through mass arbitrary arrests and prosecutions of peaceful demonstrators. And in Gaza and the West Bank, Israeli forces killed dozens of Palestinians during demonstrations.

“The shocking death tolls among protesters in Iraq and Iran illustrate the extreme lengths to which these governments were prepared to go in order to silence all forms of dissent.

“The fact that governments across the Middle East and North Africa have a zero-tolerance approach to peaceful online expression shows how they fear the power of ideas that challenge official narratives.”

While registering its shock at the scale of violence unleashed by the authorities against protesters in the region, Amnesty also saw the mass demonstrations as a powerful expression of defiance and belief in human rights.

“It also was a year that showed that hope was still alive - and that despite the bloody aftermath of the 2011 uprisings in Syria, Yemen and Libya, and the catastrophic human rights decline in Egypt - people’s faith in the collective power to mobilise for change was revived.

“In an inspiring display of defiance and determination, crowds from Algeria, to Iran, Iraq and Lebanon poured into the streets - in many cases risking their lives - to demand their human rights, dignity and social justice.

“These protesters have proven that they will not be intimidated into silence by their governments.”

Throughout 2019, governments in the region cracked down on people exercising their rights to freedom of expression online. Journalists, bloggers and activists who posted statements or videos deemed critical of the authorities faced arrest, interrogation and prosecutions.

According to Amnesty’s figures, people were detained as prisoners of conscience in 12 countries in the region, and 136 people were arrested solely for their peaceful expression online.

The authorities also abused their powers to stop people accessing or sharing information online. During the protests in Iran, the authorities implemented a near-total internet shutdown and blocked Facebook, Telegram and Twitter (all of which remain blocked). In Egypt, the authorities disrupted online messaging applications to thwart protests, as well as censoring news websites.

Some small but historic steps were taken towards accountability for longstanding human rights violations in the region. The International Criminal Court’s announcement that war crimes had been committed in the Occupied Palestinian Territories offered a crucial opportunity to end decades of impunity. The court indicated that a future investigation could cover Israel’s killing of protesters in Gaza.

Similarly, in Tunisia the Truth and Dignity Commission published its final report, and 78 trials started before criminal courts offering a rare opportunity for the security forces to be held accountable for past abuses.

The limited advances in women’s rights - won after years of campaigning by local women’s rights movements - were, however, outweighed by the continuing repression of women’s rights defenders, particularly in Iran and Saudi Arabia, and a broader failure to eliminate widespread discrimination against women. Saudi Arabia introduced long-overdue reforms to its male guardianship system, but these were overshadowed by the fact that five women human rights activists were unjustly detained throughout 2019.

A number of Gulf states also announced migrant worker reforms, including promises from Qatar to abolish its notorious “kafala” (sponsorship system) and improve migrants’ access to justice; Jordan and the UAE also indicated they would reform their own kafala systems. However, migrant workers continue to face widespread exploitation and abuse across the region.

Downloads
Human Rights in the Middle East and Africa