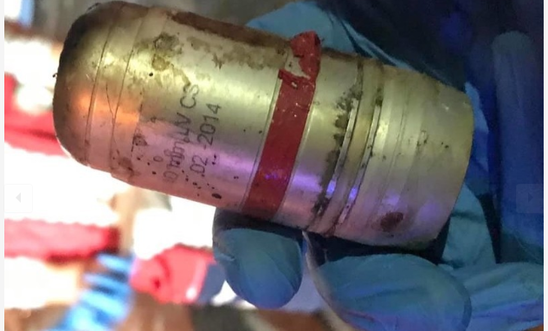 String of gruesome fatalities caused by recent use of heavyweight military-style weapons, with entire grenades lodged in victims’ smoking skulls

‘They fire it straight into the crowds. Not in the air. Directly at people. It’s savage’ - medical volunteer

The Iraqi authorities must ensure that security forces in Baghdad immediately end their use of two previously-unseen military-style tear gas grenades - dubbed “smokers” by protesters - which have killed at least five protesters in five days, as well as causing horrific injuries to others.

Witnesses have told Amnesty about how the Iraqi anti-riot police switched from using standard hand-thrown tear gas canisters from around 25 October, thereafter using the new type of grenades which have led to a subsequent spike in deaths and injuries.

Multiple witnesses have confirmed that typically up to ten grenades at a time are fired into crowded areas, emitting a type of smoke that smells different from any tear gas they had previously encountered. One protester told Amnesty:

“One [‘smoker’] landed close to me and I could barely breathe. It was like my chest was broken. The medical volunteers gave me a ventilator. I think I would have died. I have been exposed to tear gas before and it did not feel this way.”

Another protester told Amnesty his friend was killed after being hit in the head with one of the grenades on 28 October. He personally witnessed another death and an injury caused by security forces using them on 26 October. He said:

“I saw the ‘smoker’ hit a man in the waist and it charred his clothes. It ripped his clothes away … The grenade came from about 150-200 metres away. He fell right where he was and we dragged him to the tuk-tuk. The grenade came horizontally. I saw another man … hit in the shoulder. I did not see the moment of impact, but he was screaming a lot.”

Another protester described how a man who got one of the grenades lodged in his skull fell instantly to the ground and smoke was coming out of his head.

“They are not using them to disperse, they are using them to kill. All the deaths in Baghdad have been from these canisters going inside the protesters’ bodies. They do not think about the fact that there are families and children in the crowds.”

Medical volunteers have described how the grenades were being fired directly into crowded areas of peaceful protesters, causing people, including children, to faint or suffocate. One medical volunteer said:

“They fire it straight into the crowds. Not in the air. Directly at people. It’s savage.”

“All the evidence points to Iraqi security forces deploying these military-grade grenades against protesters in Baghdad, apparently aiming for their heads or bodies at point-blank range.

“What we’ve documented with these grenades in Baghdad goes far beyond misuse of a ‘safer’ weapon - the very design of the grenades being used is maximising the horrific injuries and death. Iraq’s police force must recall them from use immediately.

“There must be an independent and impartial investigation into their use and into other cases of unlawful killings and injuries during the protests.”

Amnesty has verified and geolocated several online videos filmed between 25 and 29 October in areas near central Baghdad’s Tahrir Square, a focal point of the protests.

These videos show five men who had suffered severe head trauma apparently caused by grenades. In one video - filmed on 25 October on the north-eastern side of Jimhouriya Bridge - a protester can be seen unconscious or dead, with a clear wound in the back of his skull from which smoke or gas is seeping.

The same effects can be seen in another video filmed the same day in the same location - here a different protester has a similar wound on the right of his skull. Another video filmed on either 25 or 26 October shows a group of protesters walking over Jimhouriya Bridge in the direction of Baghdad’s Green Zone. Suddenly, a protester falls to the ground clutching his head. Plumes of smoke or gas are seen coming from a wound.

Amnesty has received CAT-scan imagery from medical workers in Baghdad which confirms that protester deaths have been caused by severe head trauma. The horrific injuries in all of these images are caused by entire grenades being embedded in the victims’ skulls.

At least two models of grenade are responsible for these injuries: Serbian 40mm M99s, manufactured by Sloboda Čačak and distributed by Balkan Novotech and Yugoimport; and 40mm LV grenades, including M651 tear gas grenades and M713 smoke grenades, manufactured by the *Defense Industries Organisation of Iran. Unlike most tear gas grenades used by police forces around the world, these are modelled on military grenades designed for combat.

Research by Amnesty has found that due to their weight and construction these weapons are extremely hazardous to protesters. A typical 37mm police-style tear gas grenade weighs between 25-50 grams, consisting of several smaller canisters that separate and spread out over an area. In contrast, the Serbian and Iranian 40mm military-style grenades are made up of a single heavy slug and are between five and ten times heavier, weighing 220-250 grams.

“As both the police and military grenades are fired with a similar muzzle velocity, meaning they travel through the air at the same speed, the grenades that weigh ten times as much deliver ten times the force when they strike a protester. This is why they have caused such horrific injuries.”

All less-lethal weapons can kill when used incorrectly, and tear gas canisters should never be fired directly at people. However, all experts interviewed by Amnesty - including military and policing experts, medical doctors and forensic pathologists - agree that both the number of deaths and horrific nature of the injuries from the point-blank firing of these heavy 40mm tear gas grenades is unprecedented.

A forensic pathologist confirmed to Amnesty that they had “never seen such severe injuries from this cause before”. The expert noted that “the severity of injury and the angles of entry” strongly suggest the grenades were fired directly at the victims rather than ricocheting off the ground. Speaking to Amnesty on condition of anonymity, a medical worker at a hospital close to Tahrir Square (to which the majority of victims with head trauma were taken), reported that the facility had received “six to seven head injuries per day since Friday 25 October”. “Of those, five had metal projectiles or canister[s] lodged into their skulls”, said the medical worker.

Amnesty carried out telephone and email interviews with numerous eyewitnesses, reviewed medical records, and consulted medical professionals in Baghdad as well as an independent forensic pathologist, about the horrific injuries caused by these grenades since 25 October. Amnesty’s Digital Verification Corps geolocated and analysed video evidence from near Baghdad’s Tahrir Square documenting the fatalities and injuries - including charred flesh and “smoking” head wounds.

(*Note: this information corrects an earlier version of this press release which said the second type of 40mm tear gas grenade was likely to have been manufactured by the Bulgarian company Arsenal. Subsequent research has shown that the Iranian company was the manufacturer. Arsenal does sell large quantities of tear gas and other “less lethal” weapons to Iraq, but not the particular model implicated in these protester deaths.)