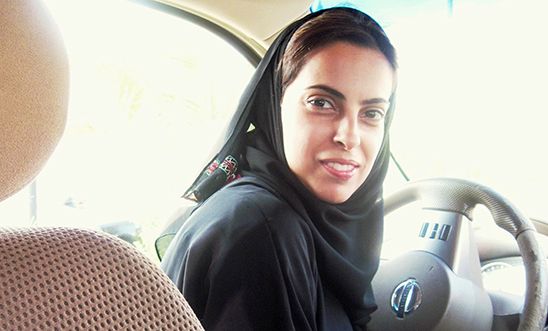 A woman taking the wheel in support of the women2drive initiative in Saudi Arabia. © Private

After years of campaigning by women activists, in June women in Saudi Arabia should finally be able to drive legally. A cause for celebration, you might think. But in a cruel twist, 11 of the women human rights defenders who led the campaign against the ban have now been arrested. Driving on the road is ok. But driving change? Not so.

Most of the 11 prominent activists who were arrested last week have campaigned against the ban, among them Loujain al-Hathloul, who was detained for 73 days after she tried to drive into Saudi Arabia from the UAE in 2014. A few days after their arrest, government-aligned media launched a public smear campaign to try to discredit them as “traitors”.

It seems Crown Prince Mohammad bin Salman – who presents himself as a ‘reformer’, having pledged to increase women’s employment and overseeing the royal decree allowing women to drive – sees no irony in taking credit for the symbolic change, while targeting the women responsible for pushing for it.

Ironic is putting it mildly though. While the Prince attempts to aggressively rebrand Saudi Arabia’s image, with glossy promises for his brothers and sisters in his Vision 2030 and glitzy tours of the UK and USA earlier this year, you barely have to scratch that image with your nail-bitten little finger to uncover horrendous human rights abuses underneath.

In fact he is presiding over a crackdown on dissent that has only got worse since his appointment, with Loujain and the other defenders arrested just the latest casualties. And that is to say nothing of the existing systematic repression of women and minorities, prolific use of the death penalty and breaking international law by bombing schools and hospitals in Yemen.

So any suggestion of reform in Saudi Arabia would almost be laughable, if the reality were not so horrifying for those who genuinely want it. One Saudi newspaper has gone as far as to say the six defenders arrested last week could face the death penalty. Let’s say that again – the death penalty – for simply and peacefully campaigning for equality.

One thing the Prince’s PR drive does tell us though, is that he cares about reputation. Which means that countries like the UK have not only a role to play, but a responsibility to act, in response to this latest chilling repression of dissent.

Theresa May was widely criticised in March this year for rolling out the red carpet to the Crown Prince given his country’s record on human rights, while Boris Johnson referred to “sweeping reform” being beneficial to both Saudi Arabia and the UK.

If the Foreign Secretary really believes in these reforms, he must now ask why they don’t include human rights defending; he must urgently – before the driving ban is lifted in June – and publicly call for the immediate release of all those held solely for peaceful activism; and condemn all attempts to enforce their silence.

The Foreign and Commonwealth Office has committed to supporting and promoting the work of human rights defenders. But we are currently seeing unprecedented levels of attack and abuse, not just in Saudi Arabia but worldwide. 281 people were killed because of their human rights work in 2016 alone.

The UK government must respond to this crisis with a renewed and strategic approach. It isn’t enough that some embassies do some good work, as they surely do. The Foreign Secretary needs to champion this work, he needs to drive it forward. And what better place to start than Saudi Arabia, where women should soon be able to drive, but speaking out is still forbidden.

There are so many things that I need to address. First of all, there are so many female and male rights activists who are free. Why? I think you are missing the point obviously

Plus, the government has provided information on the grounds that they are jailed for. None of them is related to human rights. They will go through fair trials and will be able to hire lawyers

Why HR is focusing on Saudi related matters, I want to see posts on real human rights violations in Iran or anywhere.