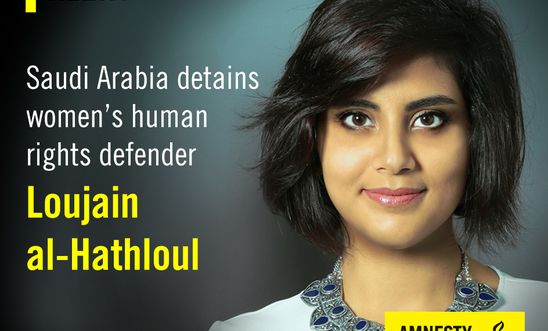 ‘Crown Prince Mohammad Bin Salman has presented himself as a ‘reformer’, but such promises fall flat amid the intensifying crackdown’ - Samah Hadid

After midnight local time, official statements in state media accused six activists and one other individual of forming a “cell”, posing a threat to state security for their “contact with foreign entities with the aim of undermining the country’s stability and social fabric”. A related hashtag describing them as “Agents of Embassies”, along with a graphic showing the six activists’ faces, have also been circulating on social media.

It is believed that the official statement refers directly to six prominent human rights defenders arrested earlier this week, whose names had not been publicly announced. Among them is Loujain al-Hathloul, the well-known campaigner against the ban on women drivers in Saudi Arabia.

“This chilling smear campaign is an extremely worrying development for women human rights defenders and activists in Saudi Arabia. Such blatant intimidation tactics are entirely unjustifiable.

“Crown Prince Mohammad Bin Salman has presented himself as a ‘reformer’, but such promises fall flat amid the intensifying crackdown on dissenting voices in the kingdom. His pledges amount to very little if those who fought for the right to drive are now all behind bars for peacefully campaigning for freedom of movement and equality.

“We are calling for the immediate and unconditional release of all activists still being detained solely for their human rights work.”

Many of the women’s rights defenders have campaigned against the long-standing ban on women drivers in Saudi Arabia. The ban is due to be lifted next month, with licenses being issued from 24 June.

Loujain al-Hathloul is well-known for her work campaigning against the ban. She was arrested at her home on the evening of Tuesday 15 May. She is currently being detained in al-Hai’r prison in the capital Riyadh, and it remains unclear why she was arrested.

Samah Hadid said: “It appears Loujain al-Hathloul has once again been targeted for her peaceful work and for speaking up for women’s rights, which are consistently undermined in Saudi Arabia.

“Saudi Arabia cannot continue to publicly proclaim support for women’s rights and other reforms, while targeting women human rights defenders and activists for peacefully exercising their rights to freedom of expression, association and assembly.”

Iman al-Nafjan is a dedicated human rights defender and blogger who was one of the leading campaigners for the right to drive. She wrote a blog for Amnesty on the subject in 2013.

Aziza al-Yousef is a fellow leading campaigner for the right to drive and to end the male guardianship system in Saudi Arabia. Both women participated in defying the driving ban in Riyadh in 2013, and have previously been harassed and interrogated for their human rights work and activism for women’s rights in the country.

Dr Aisha al-Manea, a woman’s rights advocate and defender, has also campaigned for women’s right to drive in Saudi Arabia since the early 1990s.

Dr Ibrahim al-Modeimigh is a lawyer and women’s rights advocate.

Mohammad al-Rabea is a youth activist who started a literary salon for young men and women in Saudi Arabia’s capital of Riyadh.