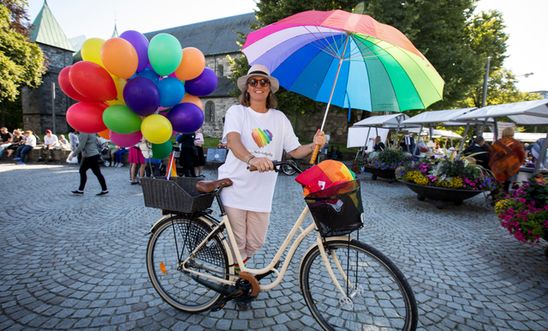 Pride is an important part of our calendar.  In Scotland we’re helping Amnesty’s local groups coordinate attendance at as many Prides as possible to raise awareness of the human rights implications of failures to respect LGBTI people’s rights.

In Scotland we’ve seen significant changes in recognising the rights of some LGBTI people – such as equal marriage and commitments by the Scottish Government to review the Gender Recognition Act (more on that later!) – however we still have a long way to go.

In the last few years new Pride events are popping up and the established ones are becoming bigger and more popular.  But as the big events become more popular and managed, we have also seen some situations we don’t like.

At Pride Glasgow last year, trans activists were arrested while protesting Police Scotland leading the march. Many believe that this was a peaceful protest and the arrests were heavy-handed and unjustified. What made matters worse was that the organisers supported the arrests rather than the right to protest of all. Pride should be a celebration of our hard-won victories but we’re not finished and Pride must also be a place for ongoing protest and struggle.

There are still members of our community in Scotland who are not able to realise their rights, in particular the trans including non-binary members. Internationally, there are many grave human rights abuses against LGBTI people, communities and organisations that requires activism and solidarity.  Pride should be both a protest and celebration – the two are not exclusive.

Trans rights in Scotland are one of the areas that we would like to see further progress on – and this requires organisations as well as members of the LGBTI community to push for change in the spirit of allies and collectivism.

This year in London and other parts of the UK will focus on refugee and asylum seeker members of the LGBTI community; whilst here in Scotland we will be proudly championing trans rights.

The review of the Gender Recognition Act in Scotland offers a fantastic opportunity to make life easier for transgender, including non-binary people, to live the life they deserve.  To fully enjoy their human rights.  With a similar process expected through Westminster soon, we could use progressive change in Scotland as leverage to ensure a high standard for the rest of the UK.

Amnesty Scotland submitted a response to the Scottish Government’s consultation earlier this year - you can read our blog about this, to get a better idea of what we’re calling for.

We believe we can use Amnesty’s influence and bring together people from across the LGBTI community in Scotland and wider allies to help call for this important change.

As well as the Gender Recognition Act in Scotland, we will be talking to people about Sakris Kupila.  Sakris is a 22-year-old medical student, youth activist and a defender of transgender rights. Sakris is being denied legal gender recognition because he refuses to undertake the requirements of the process in Finland– this requires a diagnosis of mental disorder and enforced sterilisation.  Whilst things aren’t as bad here in Scotland, there are some clear parallels.

Get in touch if you’d like to join us on Pride march this year – we are organising an Amnesty presence in Glasgow, Dundee, Edinburgh and Grampian Prides and hope to reach many more Prides next year.  If you would like Amnesty materials for other prides in Scotland – just drop us an email.  If you’re attending Glasgow, Dundee and Edinburgh Prides, come and say hello at our stalls, chat to us about LGBTI rights and send a message of solidarity to Sakris.

We look forward to meeting all members of the LGBTI community throughout the pride season and helping to build the community to ensure it is inclusive and welcoming to all.

Stay in touch: Sign up to our Scottish newsletter and the Amnesty International UK LGBTI Network.