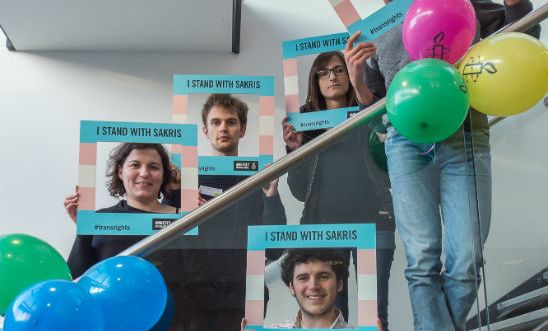 You may have seen Amnesty campaigning recently for Sakris Kupila, a 21 year old from Finland who is being denied legal gender recognition because he refuses to undergo a humiliating process that involves a mental disorder diagnosis and enforced sterilisation.  We joined Sakris in calling for reform of Finland’s gender recognition procedures.

Whilst things aren’t as bad here in Scotland, Amnesty is also calling for change to similar gender recognition laws through a consultation process by the Scottish Government.

The Scottish Government hopes the review of the Gender Recognition Act, will help to bring Scottish legislation in line with international best practice allowing people to change their legal gender in a clear and transparent process.  The Scottish Government want to make sure that people in Scotland have equal access to the changes they need and want. Amnesty International will be responding to this consultation; here I’m setting out why and how we’re responding and what we hope the outcome to be.

The consultation looks at introducing a system that would allow people to self-declare their intention to legally change their gender status and remove barriers such as invasive medical or psychiatric sign off or the requirement for evidence that a person has lived as their acquired gender for two years. The consultation will investigate options for people who identify as gender non-binary (people who don’t identify as male or female) and allow for this to be recognised on official forms.

Where Amnesty International can add value to this consultation is through our global human rights experience.   We are able to draw on our researchers from around the world to establish what other countries and states are doing; what works well and what doesn’t.  This will help us encourage Scotland to be a world leader in terms of gender recognition.

Removing the need for medical treatment will ensure transgender people are assured the right to health, which should include the right to control one’s health and body, sexual and reproductive freedom and the right to be free from interference.

Impacts of the proposed changes

For the vast majority people in Scotland, nothing will change. However, the impacts on people who do not identify with the gender on their legal documentation will be significant.  For a lot of transgender and non-binary people, being able to get legal documentation that matches their gender will be a huge piece of validation and hopefully make them feel more at ease.

Having to come out to family, friends and colleagues can have a massive impact on a person’s life. And often it’s not a thing that has to be done once. It can be every time an LGBTI person starts a new job, meets a new social group, or even every day if they work in a public facing job.  These situations can induce a fear of being exposed, and for people to stress over situations where they have no control.

The Scottish Government opening up this consultation will potentially take away some stigma trans and non-binary people experience.  I believe that through positive discourse of these issues the general public will gain a greater understanding of why the changes Amnesty and others are calling for are necessary.  Not having to go through invasive scrutiny will make the process of acquiring legal gender status change less problematic and ensure more people in Scotland’s human rights are respected.

My hope is that this process will allow positive conversations to take place across Scottish society, and for greater understanding of trans and non-binary people who find themselves in these situations.  Furthermore, I hope positive change will give trans and non-binary people more headspace to concentrate on having the important conversations with their support networks.

The Scottish Transalliance have compiled guide to help submit responses – check out their guidance on submissions by here.