Immigration Detainees in the UK 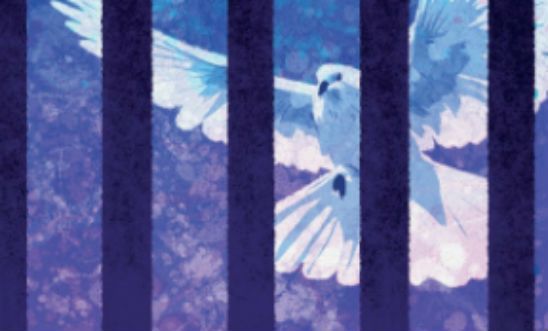 Rona MacNicol is a volunteer for Amnesty International, based in our Scotland office. Here she shares the shock, anger and inspiration to act that occurred when she helped us communicate our campaign to highlight the plight of immigration detainees in the UK.

Like most activists, I constantly make an effort to broaden my awareness of global injustices. Somewhat naively, I thought I was ‘up to date’ on most UK Human Rights issues until recently, when I was informed about Write for Rights, including the case study of Immigration Detainees and the wider Amnesty campaign for UK immigration detainees. I don’t intend to be over dramatic but I was seriously alarmed when I learned about the extent to which people are detained in this country, often unnecessarily and for indefinite periods of time.

The first question which sprang to my mind was “how does immigration detention function in a legal sense?” That’s when I realised how complex and tangled the whole system is. Individuals can be detained if their visa applications are being processed or have been denied, which, as one might imagine, applies to a lot of people. In 2016-2017 alone, 27,819 people were put in detention. Since the conditions for detention are so broad, and the numbers of detainees so high, it seems as though detention is being maintained as a matter of default or convenience.

I wasn’t satisfied with the answer that the conditions for detention were so broad as to justify these numbers. An action so drastic – one which involves separating individuals from their families and their lives – should have a clear and strategic procedure which prioritises and guarantees individual rights protection. Detainees are victim to unsettling dawn raids, the welfare of affected children is at risk, and recent research has shown that detention is having a detrimental impact on the physical and mental health of detainees. This recent Amnesty report, A Matter of Routine: The use of immigration detention in the UK, examined Home Office policy and guidance documents on the use of immigration detention; interviewed detainees, their family members and lawyers that represent them; and examined Home Office detention casework files, obtained through ex-detainees who were pursuing legal challenges for what they alleged was unlawful detention.

Following these unnerving revelations, I found myself in a situation where I could translate my alarm into action at a Write for Rights event at the Scottish Parliament. I was able to communicate my concern about the rights infringements of immigration detainees with MSPs and they exchanged stories of times in their political careers that they’d supported constituents who’d sought legal challenge against their detention.

Many MSPs were subsequently inspired to take action, writing messages of solidarity to immigration detainees. At this point, one MSP exclaimed “what do you even write?”. True, it’s almost impossible for us to imagine being torn from our families, or having life as we know it put at risk in the country we call home, or wish to call home.

Being detained for an undefined length of time and lacking knowledge of the complex legal system that’s put us there is equally unimaginable because we take our basic rights for granted.

Nevertheless, noticing how far from our reality and yet how close in political and geographical proximity this unjust system operates sounds an alarm bell that can inspire action. There are a lot of basic rights protections and freedoms to be thankful for in the UK, but this doesn’t mean we should overlook the shortcomings of some of our practices. International human rights standards require immigration detention to be used only as a last resort but the number of detainees UK-wide suggests this isn’t the case.

The rule of law is paramount in any society. But it is wasted if it fails to protect thousands from arbitrary immigration detentions, and at present, there are far too many instances of exactly this. The law should be clear and transparent. The numbers being held should be reduced, there should be a strict time limit on the length of detention, and most importantly the rights of those who are detained or are at risk of being detained need to be protected.

Taking action with Write for Rights was a great starting point, and has been shown time and again as an effective, personalised way of communicating solidarity with those who find themselves in scenarios like immigration detention that are isolating and deeply uncertain.

I imagine there are many who still don’t know that this problem exists so close to home. The psychological harm done to current and former detainees cannot be undone. But there’s plenty of scope to prevent future suffering and rights infringement and prioritising humanity in the UK immigration system is a vital next step.

The Amnesty report Rona mentions, A Matter of Routine: The use of immigration detention in the UK makes eight key recommendations to the Home Office; the UK government and to Parliamentarians. You can download the full report via the link to the right and take action to support our demands.