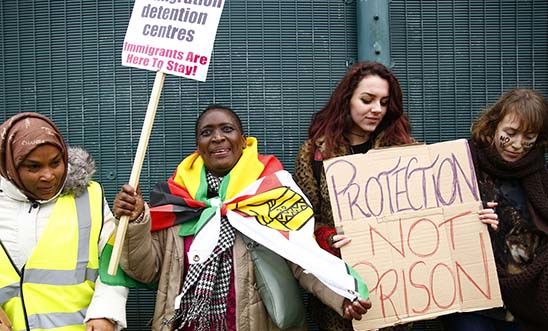 The UK must end indefinite immigration detention, Amnesty International said today, as it published a new report highlighting the long-term damage caused by the practice.

The 50-page report, ‘A Matter of Routine: The use of immigration detention in the UK’, shows how detention is being maintained as a matter of default and convenience, leading to significant harm to both detainees and their families.

With very few exceptions, immigration detainees are held without a statutory time limit, meaning that on entering detention they have no idea when they will be released. While for many, detention ultimately lasts at most a few weeks, others are held for many months and some for years. Most detainees are ultimately released back into the community.

However, Amnesty found a complacent approach to the use of detention powers, resulting in people being detained unnecessarily and then being kept in detention through often unjustifiable reasons. Little thought was being put into finding alternatives to detention.

This approach to detention powers, and the weakening of protection for detainees, allows detention to be used as a matter of routine. Essentially, if more detention centres are built, more people will be found to put in them.

“While detention may be used as a matter of routine by the Home Office, the impact it is having is far from routine for those affected by it.

“For the vast majority of detainees, detention is indefinite. And that lack of an end date is causing serious harm, not only to those detained but also to their loved ones.

“Families are being torn apart. Those responsible for making decisions to detain must start treating detention with the gravity it deserves.

“Our country has a duty to review immigration and asylum cases quickly and fairly, and to treat people with respect in the meantime.

“The Government must end the routine use of indefinite detention and introduce a time limit as soon as possible.

“It is time that the UK joined all other countries in the EU, and set a limit on how long people in immigration detention can be held.”

The number of people taken into detention in the year ending September 2017 was 27,565. As of November 2017, there are nine long-term detention centres in the UK. In addition, prisons continue to be used for immigration detention purposes. The Home Office does not share the total capacity in prisons, but a recent snapshot survey estimated around 360 people are currently held in prison solely under immigration powers.

Harm to mental and physical health

Of 16 people interviewed who had been detained, 10 said their mental health had suffered – with five of those either self-harming or attempting suicide.

Elizabeth*, who had been detained for six months when she spoke to Amnesty, described her experience as “emotional torture”. She added: “The amount of times I now think about death is more. You don’t know what’s next and what’s not next. So, you don’t have a reason to live sometimes.”

Adrien* came to the UK at the age of six with his family. As a teenager he engaged in petty crime which escalated. He was sentenced to four years in prison for armed robbery at the age of 17. He was then transferred to an immigration detention centre, where he is currently being held, aged 20. He said: “Sometimes I sit there talking to myself, looking at the sky, asking, am I ever going to get released?”.

Even for detainees whose mental health was not directly harmed, being surrounded by the damage that indefinite detention causes to others is deeply distressing. Detainees repeatedly told us that the uncertainty about when, if ever, they would be freed, contributed significantly to the deterioration of their mental health.

The effect on women

In addition to the harm done to women in detention, Amnesty’s interviews also revealed the serious impacts on women of a decision to detain a partner, parent or child. This was most evident in increased caring responsibilities, for children and other relatives, that disproportionately fall on women. However, it often combined with additional consequences, such as damage to relationships with their children and wider family, and damage to their careers and income.

Elaine* told Amnesty that her partner Chris* had been detained on three separate occasions and then released each time. On the second occasion, immigration officers arrived at their home just after 6.30am, when the children were still asleep.

She said: “[Later] my son says, ‘Oh Mum, I had a dream that immigration came, Home Office came, and took [Dad] away.’ So I was like, ‘No it wasn’t a dream. That’s what happened. You must have been half asleep’. My daughter said, ‘I could hear someone in the room, some men in the room.’ So I just said, ‘I don’t think so.’ I just brushed it off because I didn’t want to distress her further.”

Lilly*, who works as a nurse, said both her career and her ability to provide for her children were affected after her partner was detained. She said: “I had to cut my hours at work, and then money just becomes even tighter because you just haven’t got nothing spare. At the moment I’m fortunate that because of the reduction in nurses, there’s always shifts available. Even if I wanted to work some days a week I could, but I just wasn’t able to because I didn’t have that support network for the child care.”

Amnesty has serious concerns that the children of people held in indefinite detention are being deprived of parental bonding and basic life opportunities. Parents also reported that detention had resulted in their children’s behaviour and performance at school deteriorating seriously in the long term.

Amnesty’s research found other ways in which routine detention resulted in detentions being extended, rather than recognising that they should come to an end unless strictly necessary. Communication with detainees is consistently poor and errors are commonplace.

In the 37 case files Amnesty examined, 22 contained errors about the detainees’ history and characteristics. The errors ranged from incorrectly stating that they had accepted or rejected voluntary return, to recording criminal convictions and a history of absconding that the person did not possess.

Also of concern was a regular reliance on questionable reasoning to justify ongoing detention. Much of this went unchallenged by reviewing officials. On 11 occasions in the files examined, continued detention was authorised on the basis of an unjustifiable assertion that the person would soon be removed.

Elaine*, whose partner was held for months, told us of her frustration at being repeatedly told by his caseworker that his removal was imminent: “She kept saying it’s imminent, imminent, imminent. But to me seven months isn’t imminent. Imminent to me would be a few days, maximum two weeks, less than a month.”

Living in the shadow of detention

An individual’s experience of detention does not necessarily end on release.

In many instances, particularly those involving people with criminal convictions, onerous release and bail restrictions are imposed. Official Home Office policy in such cases places heavy emphasis on the use of restrictive conditions, including electronic tagging, curfews and physically reporting to a Home Office centre twice a week.  These impositions on released detainees’ daily lives, and the lives of their loved ones, are accompanied by an ever-present fear of being detained again.

For those who have no family and for whom support is not arranged, release has resulted in destitution and homelessness. Lawyers told Amnesty of clients who had been released directly on to the streets, sometimes being handed a sleeping bag on their way out.

Missed appointments or breaches of conditions potentially lead to being recalled to detention. One lawyer told us: “They’re in this cycle that they can’t really get out of. They’re just going to be re-detained.” Home Office caseworkers themselves recognised the risk of this kind of cycle, particularly the risk of destitution leading to criminality. On several occasions, they used it to justify keeping people in detention.

In response to the Shaw Review, the Government pledged to reduce the number of people detained and particularly the length of time they are detained. If the Home Office is serious in this ambition Amnesty said, caseworkers and senior officials must be willing, and be encouraged, to release people once they have detained them.

However, in the cases Amnesty examined, all too often detainees were kept in detention when it was evident that their removal from the country would not occur any time soon. In other cases, particularly those of ex-offenders, caseworkers used increasingly desperate means to justify ongoing detention that would otherwise be clearly unreasonable. Most worrying of all were the various means used to justify separating a parent from their children.

The Home Office must begin to seek alternatives to detention wherever possible and only ever turn to detention as a last resort.