The 50 best protest songs ever 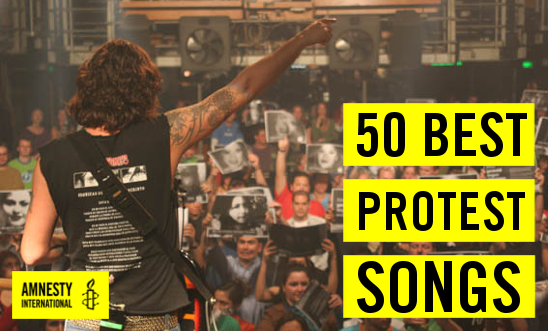 Protest songs have appeared in popular music since before most can remember. From Billie Holiday’s ‘Strange Fruit’ lamenting KKK lynchings back in 1939, through Dylan, roots reggae, punk, nu metal and pretty much any genre you can think of today — something about music inspires us to shout about what’s wrong with the world.

Making noise is a big part of any protest, but the way music spreads messages and makes people care goes much deeper.

It’s one of the best ways to make us react emotionally. We all know songs that will brighten up our day, get us motivated in the gym, or help us lament over a breakup. Indeed, a recent study published in the Elsevier neuroscience journal showed that not only does music make us emotional, it even affects how we see visual images.

In the experiment people were played a series of happy or sad tracks and shown a photo of a face, then asked to rate the emotions pictured on a 7-point scale, 1 being the most sad to 7 being the most happy.

Music was shown to powerfully influence the emotional ratings given to the faces. Happy music made happy faces seem even happier and vice versa. This shows how music can not only influence our feelings about the music itself, but also the world around us.

Personally, I grew up listening to a lot of punk and metal, which are anti-establishment in their very nature. This definitely got me interested in society and politics, turning me on to what’s wrong with the world. To this day my favourite bands are those that stand for something.

Today I want to share some of my favourite protest songs with you.

A new government is about to form and it’s never been more important that we’re aware of the issues facing our society — and it’s essential that we get inspired to do something about it.

So chuck on this playlist whenever you feel angry at the world. Have a shout, stomp about, maybe throw something in a non-dangerous way that definitely won’t damage any people or property.

Think you're powerless? You're not! These tracks will get you thinking. Then get you acting.