Why Did Austria Protect An Assad Regime Torture Chief? 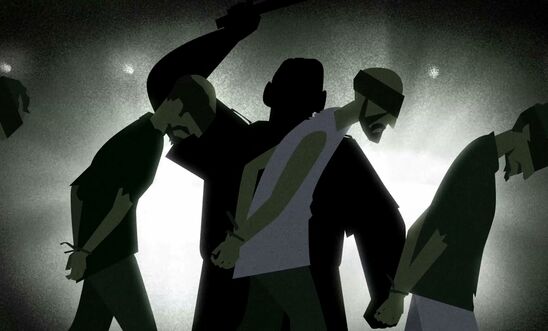 As a Syrian human rights defender, you get used to disappointment - but what I read one cold morning last November was on another level of dismay. I came across a remarkable investigation by the Austrian newspaper Kurier which said the Austrian government, aided by Israel’s Mossad, had hid a Syrian Lieutenant General wanted for investigation by the French authorities for crimes against humanity and war crimes.

Under “Operation White Milk'', a joint Austrian-Israeli operation, Khaled Halabi was hidden in Austria and given a new identity and name (Alexander). Halabi was the head of the Syrian General Intelligence Branch 335. The General Intelligence Directorate is one of the four main pillars of the Syrian Regime's repression architecture that has tortured, disappeared, and killed more than a million Syrians since March 2011, including women and children. It is the same directorate that Colonel Anwar Raslan works for. Raslan is currently on trial in Koblenz, Germany, charged with the torture of 4000 people as well as murder and sexual abuse. However, Halabi was a higher rank than Raslan and would have had extensive knowledge of and involvement in the Assad regimes torture network.

The trial in Koblenz has given many of us Syrians some level of hope and optimism - but it now seems that the Austrian authorities are actively trying to counter those international efforts and undermining the global fight against impunity and mass atrocities with its strange and troubling protection of Khaled Halabi.

In 2018, I spoke with victims of Halabi who described in graphic and painful details their arrest, and torture. I connected them with the European Center for Constitutional and Human Rights (ECCHR) to support a complaint in Austria against 24 senior officials in the Assad regime. The complaint was submitted by ECCHR, the Syrian lawyers Anwar al-Bunni (Syrian Center for Legal Studies and Research) and Mazen Darwish (Syrian Center for Media and Freedom of Expression) as well as the Center for the Enforcement of Human Rights International (CEHRI) in Vienna. The complaint was filed on behalf of a group of torture survivors that include an Austrian citizen and several people who were detained while still minors, and who have lived in Austria and Germany for some time.

Halabi’s protection and evasion of justice is a scandal and highlights a blatant violation of Austria’s commitments under international law, including the Convention Against Torture, to which Austria is a state party. The Austrian authorities are well aware that state parties are required to prosecute or extradite alleged perpetrators of torture when they are found in any territory under its jurisdiction. Article 14 of the Convention also requires states parties to ensure that all victims of torture and ill-treatment are able to access remedy and obtain redress. This scandal also shows Austria’s violation of its own citizens constitutional right to justice, as one of the plaintiffs in the case is an Austrian citizen.

Beyond the legal responsibilities and violations of laws, ‘Operation White Milk’ raises fear and distrust amongst Syrian refugees in Austria, and Syrian human rights activists and lawyers working for justice and accountability in Europe. The general feeling among many Syrians I spoke to is that Austria is committing violations against victims’ rights and supporting war criminals who tortured them and caused them to leave their country. They feel Austria is brazenly ignoring the complaint of war crimes and seemingly becoming a safe haven for war criminals. Syrian human rights defenders I have spoken to who work day and night to help bring justice for their fellow citizens, were shocked by this murky Austrian-Israeli scandal.

Joumana Saif, a Syrian human right lawyer, and a research fellow in the International Litigation and Accountability Program in ECCHR said:

Such news is sad and unfortunate. I was wondering why Austria is not cooperating with the complaint. We don’t know where the investigations arrived at, and we have not seen anything. A country such as Austria, with international obligations, should be more serious and keener on its international reputation and its commitments to the human values that it advocates. Austria is stripping Syrians from the only tool they have now: International justice.

Mazen Darwish, a long-time human rights lawyer shared with me his disappointment with Austria’s attitude and inaction:

While we were expecting Austria to be a legal and moral partner in pursuing criminals, we are surprised that political and security considerations place Austria on the side of protecting war criminals.

Anwar al Bunni, a prominent Syrian human rights lawyer expressed to me his disappointment with Austria’s actions and said:

It seems that there is a suspicious and deliberate slowing down towards the complaint. Austria is failing to comply with international human rights laws, and it is playing the role of being complicit with the Syrian regime in covering up its crimes. We have been pursuing Khaled al-Halabi for two years. Austria failed to implement the investigation warrants issued by France and another European country, and this led to his escape from sight.

Fadel Abdul Ghani, the head of the Syrian Network for Human Rights also expressed to me his dismay:

International and European human rights and justice organizations should take action to expose Austria’s practices. Countries such as Austria are supposed to set an example by complying with international law, and thus their noncompliance encourages other countries known for their violations to go even further with their violations.

Syrians who are fighting against impunity and paving the way for a comprehensive justice process for Syrians are angry and disappointed with Austria countering their efforts. We want action from states to hold Austria accountable, including by challenging its compliance with the UN Convention Against Torture, by reporting its actions to the UN Committee against Torture and questioning them in UN periodic reviews. Austria has a lot of questions to answer and we won’t stop asking them until we get satisfactory answers.

In part two, I will detail the crimes of Lieutenant General Khaled Halabi, including those before the Syrian uprising in March 2011.