Egypt: Life Of Jailed And Beaten Activist At Risk

British national and activist for human rights in Egypt Alaa Abdel Fattah has been on hunger-strike since 2 April in protest of his unjust imprisonment, cruel detention conditions and denial of consular visits. In December 2021, an emergency court sentenced him and human rights lawyer Mohamed Baker to five and four years in prison, respectively, following a grossly unfair trial. They are prisoners of conscience, solely targeted for their activism, and should be immediately and unconditionally released. 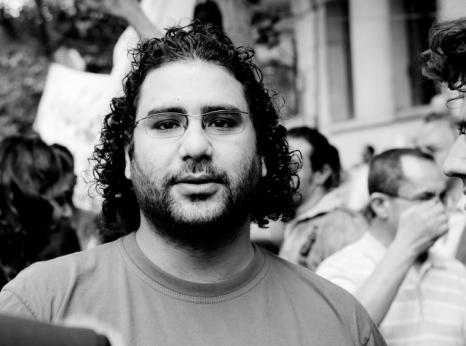 British national and activist for human rights in Egypt Alaa Abdel Fattah has been on hunger-strike since 2 April in protest of his unjust imprisonment, cruel detention conditions and denial of consular visits. In December 2021, an emergency court sentenced him and human rights lawyer Mohamed Baker to five and four years in prison, respectively, following a grossly unfair trial. They are prisoners of conscience, solely targeted for their activism, and should be immediately and unconditionally released.

Mohamed Baker and Alaa Abdel Fattah have been detained since 29 September 2019 pending investigations into charges of “joining a terrorist group”, “funding a terrorist group”, “disseminating false news undermining national security” and “us[ing] social media to commit a publishing offence” under Case No.1356/2019 of the Supreme State Security Prosecution (SSSP), a branch of the Public Prosecution specialized in investigating national security threats. The SSSP opened investigations against them into similar charges under new Case No. 1228/2021 as part of a strategy increasingly used by the authorities, referred to as "rotation", to circumvent the two-year limit for pre-trial detention allowed under Egyptian law and indefinitely extend the detention of activists.

The trial of Alaa Abdel Fattah and Mohamed Baker in Case No. 1228/2021 started on 28 October 2021, together with another defendant: blogger and activist Mohamed Ibrahim Radwan “Oxygen”, who was also convicted on charges of “spreading false news” in relation to social media posts and sentenced to four years’ imprisonment. Proceedings before emergency courts are inherently unfair as their verdicts are not subject to appeal by a higher tribunal. The defendants were also denied their right to adequate defence as their lawyers were prevented from communicating with them in private and photocopying the casefiles, indictments and verdicts. Their lawyers filed complaints to the office responsible for ratifying Emergency State Security Court (ESSC) verdicts, calling on the president to quash the verdict in accordance to Article 14 of the Emergency Law. On 3 January 2022, President Abdel Fattah al-Sisi ratified the verdict against all three. A document seen by Amnesty International indicated that the sentence commenced from the date of ratification, rather than the date of their arrests. Mohamed Baker’s lawyers filed a case in front of the State Council, the administrative court, for the 31 months he spent in pre-trial detention to be counted towards his sentence. The next hearing is scheduled for 14 May.

Alaa Abdel Fattah and Mohamed Baker are held in inhumane conditions at the Tora Maximum Security 2 Prison, in Cairo. Prison authorities hold them in small, poorly ventilated cells and have denied them beds and mattresses. Unlike other prisoners, they are prohibited from exercising in the prison yard and are not allowed to use the prison library nor to receive books or newspapers from outside prison at their own expense. The prison authorities have also been denying them adequate clothing, radios, watches, access to hot water and any personal belongings, including family photos. Mohamed Baker informed his wife during a prison visit that as a result of limited movement and poor prison conditions, he developed pain in his joints and muscles. The families of Mohamed Baker and Alaa Abdel Fattah have lodged official complaints about their treatment in prison, including their exclusion from the Covid-19 vaccine rollout. No information has been made available on the status on their complaints.

During the last of week of April 2022, the Egyptian authorities released tens of men and women held for political reasons, including journalist Mohamed Salah, human rights defender Ibrahim Ezz El-Din and journalist and politician Hossam Moanis arbitrarily detained for periods ranging between 29 and 34 months. On 26 April, President Abdel Fattah al-Sisi called for a "national dialogue" with opposition politicians and announced the reactivation of the “Presidential Pardons Committee” launched in 2016. On 5 May, a group of eight Egyptian NGOs called on the authorities to ensure the release of all those arbitrarily detained, sharing their proposal for a right-based approach for the release process.

On 23 November 2020, the Official Gazette published the decision of the Cairo Criminal Court to include Mohamed Baker and Alaa Abdel Fattah to the “terrorists list” for five years without any due process as part of case No. 1781/2019 by the SSSP. On 18 January 2022, the Court of Cassation rejected their final appeal against the decision. The effect of the decision includes a travel ban, an asset freeze and prohibition from engaging in political or civic work for five years.
Alaa Abdel Fattah, a well-known political activist and government critic, has been repeatedly arrested in recent years including for his role in the 25 January Revolution of 2011, which led to the toppling of then president, Hosni Mubarak after nearly 30 years in power. Mohamed Baker is a human rights lawyer and director of Adalah Center for Rights and Freedoms, which he founded in 2014. They are among the thousands of people detained arbitrarily in Egypt solely for peacefully exercising their human rights or following grossly unfair trials, including mass and military trials.