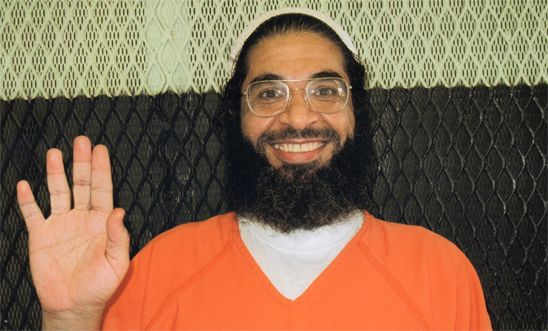 UK resident Shaker Aamer has finally been released after being detained in Guantánamo Bay detention centre without charge or trial for 13 years.

46-year-old Shaker Aamer was one of the first detainees to be sent to the notorious camp in 2002, and the last UK resident to be detained there. He was cleared for transfer from Guantánamo in 2007, indicating that US authorities had no intention of bringing him to trial for the last eight years.

A message of thanks from Shaker Aamer

Shaker Aamer sent us a photo of him back in the UK and this message for everyone who fought for his release: 'I can't tell you how much I want to speak to all of you and stand with all of you, carrying on the struggle for justice for everybody who has been oppressed and needs our help. If there is one thing we can do to save the whole world it is to fight for justice. We will work hard together to close Guantánamo and every unlawful facility run by any government worldwide. Justice has no colour or religion or race.

His lawyer maintains that Shaker Aamer remained imprisoned for so long because he witnessed US and UK agents torturing men while he was in US detention.

Shaker Aamer has claimed that MI5 officials were in the room when he was being tortured, which highlights the urgent need for an independent, judge-led inquiry into UK involvement in the CIA's programme of torture and rendition.

'Aamer has alleged that he was tortured in full view of British agents in Afghanistan - a very serious claim that should be fully investigated as part of an independent, judge-led inquiry into a whole set of allegations that UK officials were involved in kidnap, detention and torture overseas during the ‘war on terror'.'

We've been campaigning on Shaker Aamer's case for more than ten years – from urgent actions and demonstrations to open letters, hunger strikes, and political briefings.

Thousands of people, including many politicians across the board, have supported our calls for his release over the years. David Cameron personally asked Obama to release him from Guantánamo and return him to the UK.

41,688 of you signed our most recent petition calling on UK Prime Minister David Cameron and US President Barack Obama to return Shaker Aamer to the UK, unless he is to be charged and brought to fair trial.

In March 2015, we delivered your signatures to Downing Street with the help of Shaker Aamer's family and Amnesty supporter David Nicholl (pictured below). David ran his second London marathon for Shaker Aamer this year. In preparation he ran the length of Whitehall during the petition hand-in dressed in an orange jumpsuit and chains.

Later the same day, politicians from all the major parties debated Shaker Aamer's case in the House of Commons - read the full transcript.

A resolution was passed calling on 'the US government to release Shaker Aamer from his imprisonment in Guantánamo Bay and to allow him to return to his family in the UK'.

'I hope I have made it clear that the UK government are absolutely committed to securing the release of Mr Aamer. Today I would like to underline that commitment and join the House in calling for the US government to approve the release of Shaker Aamer to the UK.'
Foreign Office Minister Tobias Ellwood

Shaker Aamer moved to the UK in 1996, where he married a British woman. They have four British children.

He was originally detained by Afghan forces in 2001 in Afghanistan, where he was living at the time with his family. According to Shaker, he was in Afghanistan because he was working for a charity. In February 2002 he was sent to Guantánamo Bay.

In those 13 years since, Shaker Aamer says that he has been tortured and has spent much of the time in solitary confinement.

‘I am dying here every day, mentally and physically… We have been ignored, locked up in the middle of the ocean…’
Shaker Aamer, 2005

Shaker Aamer is now said to be riddled with arthritis and other medical problems, which he has not received adequate medical treatment for.

Guantánamo Bay is renowned for its abusive conditions. While detained, Shaker Aamer has, with other detainees, protested against conditions, including by participating in hunger strikes.

A damning Senate report summary on the CIA’s use of torture during the counter-terrorism programme in the aftermath of 9/11 was released in December 2014.

We're calling for an independent, judge-led inquiry because we still don’t know how deeply the UK was involved.