Exposed: Torture and the CIA 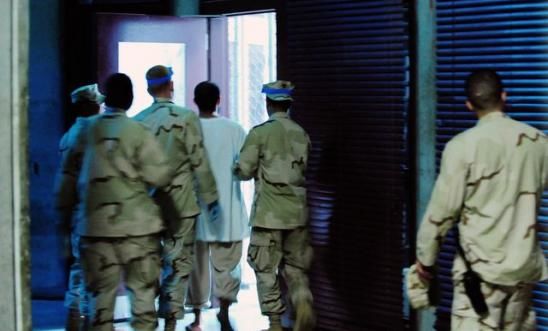 In some cases CIA detainees were tortured before being taken to Guantánamo. © US DoD

‘…a program, chilling in its detail, unlawful from day one’

The day before the 30th anniversary of the Convention against Torture, the release of a damning report on CIA interrogation reveals that the US government used torture.

‘This was not some rogue operation. This was a program, chilling in its detail, unlawful from day one, that gave the green light to commit the crimes under international law of torture and enforced disappearance – with impunity. It’s time for accountability, including a full investigation, prosecutions and remedy for victims.’

The full horror of torture

Buried within the report summary are some of the gruesome details of the torture methods used in secret CIA-run prisons across the world.

Handcuffed CIA prisoner hanging from bar 22 hours a day for two days. "was wearing a diaper and had no access to toilet facilities".

The CIA was running dungeons as bad as that of any dictatorship in the world. Monstrous: pic.twitter.com/LQl090QN7l

The torture report summary also reveals some of the horrific effects the interrogation techniques had on the detainees themselves - including hallucinations, paranoia, insomnia, and attempts at self-harm and self-mutilation.

The CIA did not act alone

A number of international partners helped to facilitate the rendition, torture, and secret detention of those the USA suspected of involvement in terrorism.

Many European countries have worked with the CIA on this programme, including Italy, Lithuania, Romania, Sweden, and the UK, amongst others. In 2012 and 2013, the European Parliament called on all implicated EU members and associated states to fully investigate their roles in these operations.

‘While the ugly truth about US ‘war on terror’ torture is gradually emerging, we still don't know how far Britain was dragged into the mire.’

Nobody is above the law

The report, while not enough, is a stark reminder of the ongoing impunity for appalling human rights violations – all committed in the name of ‘national security’.

The failure of President Obama and Congress to ensure accountability for torture, enforced disappearances and other human rights violations leaves the USA in serious violation of its international legal obligations.

‘Former President George W. Bush should have been investigated long ago for his role in authorising this program, including his assertion since leaving office that he personally granted the CIA’s request to use waterboarding and other ‘enhanced interrogation techniques’ against particular detainees.’

But despite bringing some abuses to light, it is far from delivering justice for the crimes committed by the highest authorities in the USA. The full report remains classified as ‘top secret’.

We’re calling for the release of the full report with as few redactions as possible, and none that obscure evidence of human rights violations.

Under the UN Convention against Torture, torture is never justified – not under any circumstances, and all those responsible must be fully investigated.