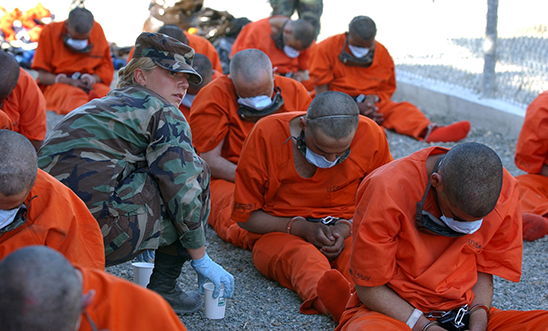 Guantánamo Bay has now been running for longer on President Obama’s watch than that of his predecessor, George Bush.
Time is running out fast for Obama and his administration to meet their human rights obligations on these issues.
President Obama’s latest proposal to move some of the detainees to the US mainland for continued detention without charge is reckless and ill-advised. It won’t end indefinite detention – it will simply shift it to the mainland.

In the wake of terrorist attacks in the USA on 11 September 2001, the administration – headed by President George Bush – declared a ‘war on terror’. He argued that the need to counter terrorism and keep people safe overrode the obligation to respect human rights.

Guantánamo Bay was established by the United States in January 2002 as a place for the US authorities to hold people perceived to be ‘enemy combatants’ in this war on terror. The first detainees were transferred to the prison camp, based in Cuba, on 11 January 2002.

At Guantánamo, the US government sought to hold detainees in a place neither US nor international law applied.

The facilities at Guantánamo have become emblematic of the gross human rights abuses perpetrated by the US government in the name of terrorism.

779 men have been taken to the facility since then. Of these, only seven have been convicted, including five as a result of pre-trial agreements under which they pleaded guilty in return for the possibility of release from the base. These men faced trial by 'military commission'. The proceedings did not meet fair trial standards.

Only one Guantánamo detainee has been transferred to the US mainland for trial in a civilian court.

There are currently 107 detainees held in the US detention center in Guantánamo Bay, Cuba. Of them, 47 have been cleared for transfer, yet still remain behind bars.

Shaker Aamer was one of the first detainees to arrive at Guantánamo Bay in 2002. He was detained in Afghanistan in November 2001 where, according to his account, he was working for a Saudi charity.

After 13 years in Guantánamo without charge or trial, and thousands of miles away from his family, Shaker Aamer was finally released and returned to his family in the UK in October 2015.

He was actually cleared for transfer from Guantánamo in 2007, indicating that US authorities had no intention of bringing him to trial for the last eight years.

Shaker Aamer's lawyer maintains that he remained imprisoned for so long because he witnessed US and UK agents torturing men while he was in US detention. Shaker Aamer has claimed that MI5 officials were in the room when he was being tortured, which highlights the urgent need for an independent, judge-led inquiry into UK involvement in the CIA's programme of torture and rendition.

Dozens of Guantánamo inmates have resorted to hunger strikes in protest at their conditions and continuing detention. At one time over 100 detainees were on hunger strike.

The video above produced by The Guardian is based on testimonies from five detainees describing how they have been force fed with a tube. Shaker Aamer told his lawyer about dozens of 'Code Yellow' incidents, in which imates collapse or pass out.

‘Myself, my son Mohammed and my wife Asma thank all Amnesty International members for supporting me and for supporting human rights... I will never forget their help’
Sami al-Hajj, a cameraman with Al Jazeera television, detained at Guantánamo for six years

Since the first person was transferred to Guantánamo Bay in 2002 we have been campaigning for all detainees to be immediately released or charged with a recognisable criminal offence and given a fair trial.

The international outcry has led to many gaining their freedom. But more than 100 remain behind bars and we will not stop campaigning until they get justice.

While governments should of course protect citizens from the threat of terrorism, this threat should never be used to justify the violation of human rights or to repress legitimate opposition and dissent.