All those responsible for human rights violations must be held accountable.

It has been over 120 days since Russia's invasion of Ukraine. An act of aggression that violates the United Nations Charter and is a crime under international law. Over 120 days of attacks on civilian areas and strikes against hospitals, schools, and theatres.

Russia’s military occupation and the resulting crisis has led to the gravest human rights and refugee crisis in Europe since World War Two.

As anticipated, the invasion has had horrific consequences for human lives and human rights. No matter who we are, all of us can feel the plight of Ukrainian families fearing for their lives. As headlines dissipate, solidarity with Ukrainian families and the victims of this war is part of our shared humanity.

Justice, accountability and redress for the victims of crimes under international law must be centred in any resolution to this crisis. 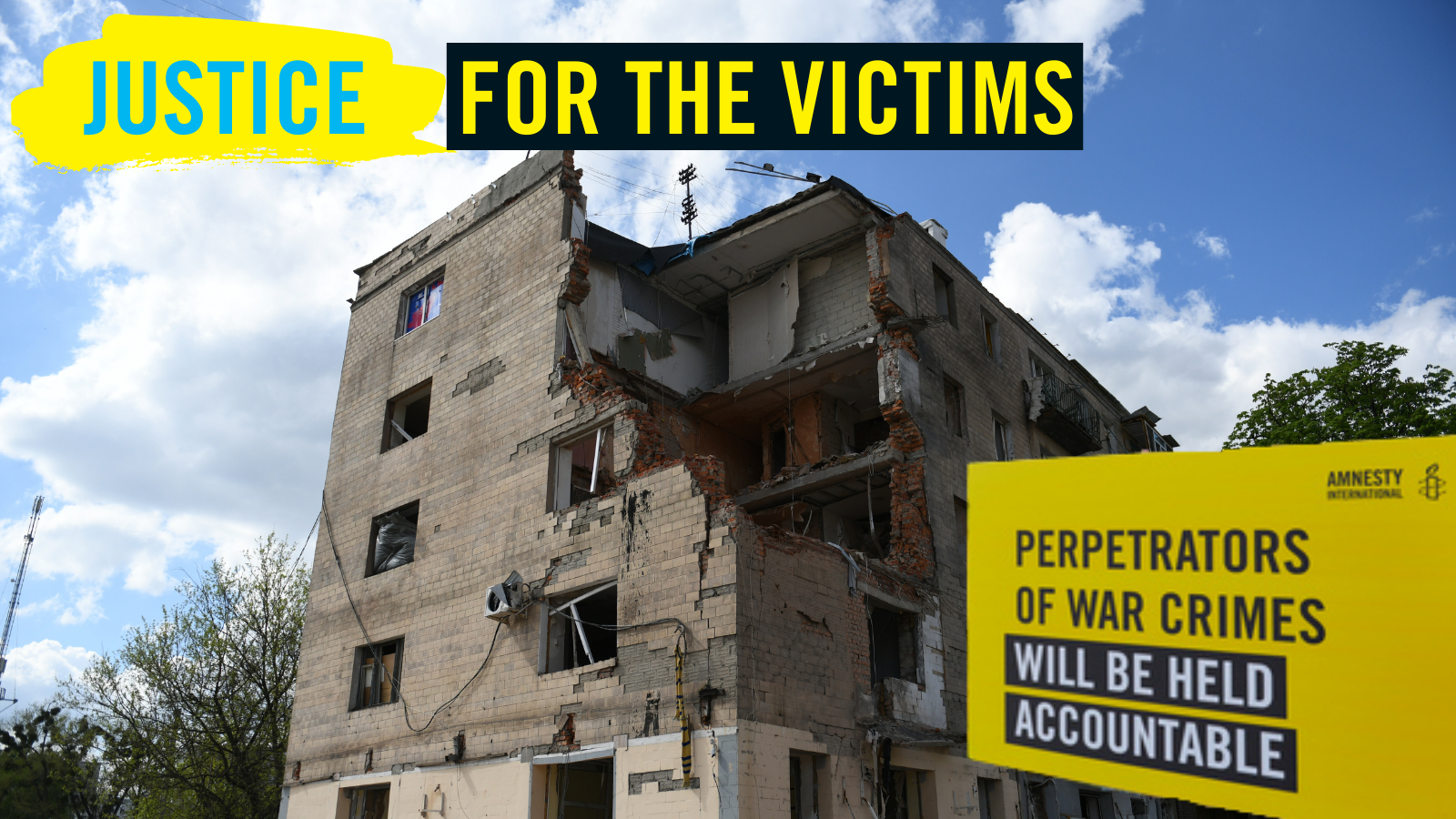 Justice for victims must be guaranteed.

Russia’s invasion of Ukraine is an act of aggression and a crime under international law. Russia is seeking to depose Ukraine's lawfully elected government. Within and beyond Ukraine, this is having a massive impact on civilians’ lives, safety and well-being. The International Court of Justice has ruled that Russia's acts are not justifiable. To add insult to injury, Russia is a permanent member of the UN Security Council, with significant power on the international stage.

We have conducted on-the-ground investigations and testimonies across the towns of Borodyanka, Bucha, Andriivka, Zdvyzhivka and Vorzel. We documented unlawful air strikes and extrajudicial executions. In Kharkiv we documented war crimes by Russian forces against civilians. Ordinary people were shelled by banned weapons in hospitals, at playgrounds and queuing for humanitarian aid.

We also investigated the attack on the Mariupol theatre, which shook the world.

Agnès Callamard, Secretary-General of Amnesty International, said: “It is vital that all those responsible, including up the chain of command, are brought to justice.”

"Russia cannot claim it does not know the effect of these types of weapons... And the decision to use them shows absolute disregard for civilian life." @DRovera 👇 https://t.co/u9wn5DVSF3

Victims and their families deserve justice.

We demand impartial justice over all war crimes and crimes against humanity in Ukraine.

The importance of international humanitarian and human rights law is not only relevant for the Ukraine crisis. From Syria to Myanmar, Palestine to Sierra Leone, Bosnia to Cambodia, international law safeguards human rights and holds perpetrators accountable.

Agnès Callamard, Secretary-General of Amnesty International, said: “What is happening in Ukraine is a repetition of what we have seen in Syria.”

The Koblenz Trial held in Germany was historic. Syrian officials were tried and convicted for torture. However, it was a partial win, as the court did not provide the victims with compensation. This showed that justice is possible but it must be victim-centred. We must ensure the same is possible for Ukrainian families.

Mansour Omari, Syrian human rights defender said: “For many Syrians, especially victims of torture, the trial has had a significant symbolic and emotional impact.”

We welcome that the UK has committed humanitarian resources to ensure perpetrators are held to account. This includes support of the International Court of Justice, the International Criminal Court and UN Human Rights Council. They can do much more and we will be pressing them on this.

What are we calling for?

On the frontlines: human rights defenders

Since the invasion began on February 24th 2022, our crisis teams have been documenting the escalation in violations of international law. Many civilians have been killed after attacks on hospitals, schools and towns.

The invading army has used ballistic missiles and cluster bombs, some of which are banned. This means their usage may qualify as a war crime. Abuses against prisoners of war, from both Russian and Ukrainian forces, have also been recorded.

Since the Russian invasion, millions of people living in Ukraine have been forced to protect themselves and their families by seeking safety in neighbouring countries. More are expected to flee the country as the war rages on.

The response by receiving countries needs to be immediate and must protect human rights.

The Russian Federation has been imprisoning anti-war protestors. Aleksandra Skochilenko, an activist who replaced price tags in supermarkets with anti-war slogans, faces 10 years in prison. Feminist anti-war activists are also being targeted. Since March, Russian authorities have begun a dangerous crackdown on civil rights and freedom of expression.

Globally, people have been protesting Russia's invasion of Ukraine – they still are. Together, by continuing to highlight these human rights abuses and holding governments to account, we believe humanity can win.