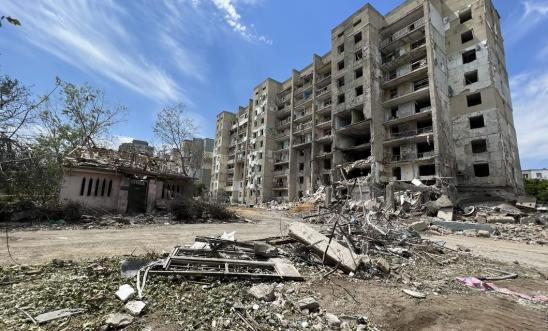 Distressing eyewitness testimony describes carnage of aftermath, with residents killed in 1am attack

Russian airstrikes on an apartment block and hotel in the coastal town of Serhiivka in the Odesa region of southern Ukraine - strikes which killed at least 21 civilians and injured at least 35 others - were “reckless” and amount to war crimes, said Amnesty International following a new on-the-ground investigation.

Russian forces launched at least two missiles towards Serhiivka, 45 miles southwest of the city of Odesa, with the first missile hitting the Godji Hotel and killing six civilians. Minutes later, a second missile hit a hardware store at the front of a residential nine-storey building at 23 Budzhaska Street, killing 15 civilians.

Amnesty visited the strike locations and found no evidence of the presence of Ukrainian soldiers, weapons or other military targets nearby. Satellite imagery reviewed by Amnesty also failed to indicate military activity in the area prior to the attack.

Local government officials told Amnesty that the weapons used in the attack were two Kh-22 guided missiles. This is a warhead of more than 900kg from a targeting system designed to hit ships rather than land objects, making it potentially extremely inaccurate and completely inappropriate for use in a populated area. Amnesty’s weapons expert found ordnance fragments consistent with a large guided missile at the scene of the hotel attack, including old-style rivets consistent with a 50-year-old weapon such as the Kh-22.

Amongst those killed at the Godji Hotel were the hotel manager, Nadiya Rudnitskaya, and her 12-year-old son Dmytro Rudnitsky. Olha Ilyashevych, 30, and her mother Maria, who had both fled fighting from Slovyansk in the Donbas region, were also killed. The fatalities also included Oleksander Shishkov, 41, a well-known football coach who lived in Odesa but who had been staying at the hotel following a children’s football match the day before.

Among those killed in the attack on Budzhaska Street were Volodymyr Chulak, a 68-year-old PE teacher, his wife Tetiana, a 64-year-old chef, and their son Mykhaylo, 35, who lived in Odesa and was visiting his parents.

“I heard the explosions and ran to the street … I ran there [number 23] and into the building, and found Tetiana in her bed, dead, covered in smashed-up furniture and debris, and her husband Volodymyr was dead in the kitchen. Their son Mykhaylo had been standing on the terrace and was directly hit by the missile. He was in shreds.”

Also killed were Halyna Rumashuk, a 50-year-old receptionist, and her husband Serhii, a 48-year-old builder. They initially survived the strike and managed to escape the building, but after returning to look for their belongings a wall collapsed and killed them both. Roman, 36, who lived on the fourth floor, told Amnesty that he and his mother only survived because they were behind a concrete wall in their kitchen. The rest of their apartment was destroyed in the blast. Roman attempted to save his next-door neighbour, Proskovia Pavlenko, 63, who was fatally wounded by the blast and died as Roman carried her from the building.

“These powerful weapons were designed to destroy warships, and firing them into residential areas is extremely reckless.

“This attack is yet another example of the Russian military’s utter disregard for civilians in Ukraine as they continue to cause needless death and destruction.

“The Russian military’s relentless bombardment of residential areas full of civilians, killing people as they sleep, shocks the conscience.

“How many more civilians must die before there is justice and accountability for these crimes?

“All those responsible for such war crimes must face justice for their actions.”