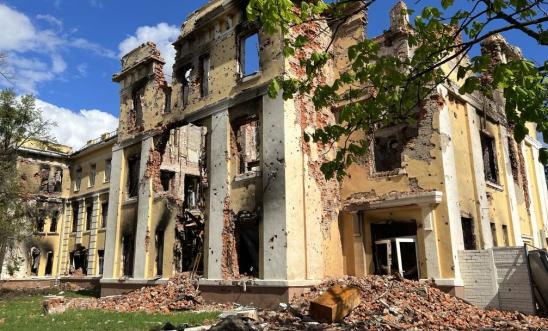 Hundreds of civilians have been killed in the Ukrainian city of Kharkiv by indiscriminate Russian shelling using widely banned cluster munitions and inherently inaccurate rockets, Amnesty International said in a new report today.

The report documents how Russian forces caused widespread death and destruction by relentlessly bombarding residential neighbourhoods in the city.

During an extensive investigation, Amnesty found evidence of Russian forces repeatedly using 9N210/9N235 cluster munitions which are subject to international treaty bans because of their indiscriminate effects.

In its 44-page report, ‘Anyone can die at any time’: Indiscriminate attacks by Russian forces in Kharkiv, Amnesty researchers investigated 41 strikes - which killed at least 62 people and injured at least 196 - and interviewed 160 people in Kharkiv over 14 days in April and May, including survivors of attacks, relatives of victims, witnesses, and doctors who treated the injured. Researchers collected and analysed material evidence from strike locations, notably munitions fragments, as well as an array of digital materials.

The bombardment of Kharkiv, home to 1.5 million people, started on 24 February, the day Russia’s invasion of Ukraine began, with residential neighbourhoods in the northern and eastern parts of the city bearing the brunt of the shelling.

In addition to cluster bombs, Amnesty’s research shows that Russian forces routinely used unguided rockets - such as Grads and Uragans - which are inherently inaccurate, making them indiscriminate when used in populated areas. Unguided artillery shells have a margin of error of more than 100 metres. In residential areas where buildings are no more than a few metres apart, such inaccuracies are virtually certain to cost civilian lives and cause widespread destruction of civilian infrastructure. Ukrainian forces, for their part, have often launched strikes from residential neighbourhoods, endangering civilians in those areas. This violates international humanitarian law but does not in any way justify Russian forces’ repeated indiscriminate strikes.

The director of the Medical Department at the Kharkiv Regional Military Administration told Amnesty that 606 civilians had been killed and 1,248 injured in the Kharkiv region since the conflict began. Most of the strikes investigated by Amnesty inflicted multiple casualties over widespread areas.

“The people of Kharkiv have faced a relentless barrage of indiscriminate attacks in recent months, which killed and injured hundreds of civilians.

“People have been killed in their homes and in the streets, in playgrounds and in cemeteries, while queueing for humanitarian aid, or shopping for food and medicine.

“The repeated use of widely-banned cluster munitions is shocking, and a further indication of utter disregard for civilian lives. The Russian forces responsible for these horrific attacks must be held accountable for their actions, and victims and their families must receive full reparations.”

In one case on the afternoon of 12 March, Veronica Cherevychko, a 30-year-old logistics manager, lost her right leg when a Grad rocket struck a playground in front of her home in the Saltivka neighbourhood. She told Amnesty:

“I was sitting on this bench when the explosion happened. I remember hearing a whistling sound just before the explosion. Then I woke up in hospital, without a leg; my right leg was gone. Now my life is divided into before 12 March, and after 12 March. I will get used to this. Now I am not yet used to it; I often try to touch my leg, to scratch my foot … I don’t know what to say about [the] people who did it. I will never understand them.”

In another attack on the afternoon of 15 April, Russian forces fired cluster munitions in and around Myru Street, in the Industrialni district. At least nine civilians were killed and more than 35 injured, including several children. Doctors at Kharkiv’s City Clinical Hospital 25 showed Amnesty metal fragments removed from patients’ bodies, including the distinctive pieces of steel rods contained in 9N210/9N235 cluster munitions.

Tetiana Ahayeva, 53, a nurse, was standing by the entrance of her building when several cluster bombs exploded. She told Amnesty:

“There was a sudden sound of firecrackers everywhere, lots of them, all over. I saw puffs of black smoke where the explosions occurred. We dropped to the ground and tried to find cover. Our neighbour’s son, a 16-year-old boy called Artem Shevchenko, was killed on the spot … His father had a shattered hip and a shrapnel wound in his leg. It’s hard to say how long the explosions lasted. A minute can seem to last forever.”

In a nearby playground, Oksana Litvynyenko, 41, suffered devastating injuries when several cluster munitions exploded while she was walking with her husband Ivan and their four-year-old daughter. Shrapnel penetrated her back, chest and abdomen, puncturing her lungs and spine. The strike took place in the middle of the afternoon, while many other families were at the playground with their children. She tragically died on 11 June. Ivan told Amnesty on 26 April:

“All of a sudden, I saw a flash … I grabbed my daughter and pushed her against the tree and hugged the tree, so that she was protected between the tree and my body. There was a lot of smoke and I couldn’t see anything … Then as the smoke around me eased, I saw people on the ground … my wife Oksana was lying on the ground. When my daughter saw her mum on the ground in a pool of blood, she said to me, ‘Let’s go home. Mum is dead and the people are dead’. She was in shock and so was I. I still don’t know whether my wife will recover. The doctors cannot say if she will be able to speak or walk again. Our world has been turned upside down.”

After more than a month in intensive care, Oksana’s condition had improved slightly but she died from her injuries on 11 June.

Amnesty researchers found the distinctive fins, metal pellets and other fragments from 9N210/9N235 cluster munitions at the playground. Several small craters in the concrete ground were also visible, consistent with the effects of such munitions.

At least six people were killed and 15 were injured on the morning of 24 March, when cluster munitions struck a parking lot near the Akademika Pavlova metro station where hundreds of people were queuing for humanitarian aid. Valeriia Kolyshkina, a sales assistant in a pet shop close to the scene of the strike, said one man was killed when the explosions destroyed the glass front of a nearby shop. She told Amnesty:

“A man was killed just outside the shop. He was standing outside smoking while his wife was buying pet food … Metal shrapnel came through the front window, flying over my head as I was behind the counter. Then there were several more explosions. It was utter panic. The shop was full of people. We ran to the storage room at the back of the shop for protection. It was very scary… I thought I would die.”

Ruslan*, a local policeman who witnessed the attack, said: “It was really a horrible situation, shrapnel was falling like rain.”

Amnesty researchers found parts of a 220mm Uragan rocket - which carries 30 submunitions - still embedded in a crater in the tarmac. Nearby, they also found fins and fragments from 9N210/9N235 cluster munitions and multiple other craters. Two other cluster munitions also hit the nearby Holy Trinity Church, used as a humanitarian hub for the preparation of food and aid packages to distribute to older people and those with disabilities and reduced mobility. Pastor Petro Loboiko and Pastor Serhii Andreiivich showed Amnesty shrapnel from two cluster munitions that had penetrated the church’s walls and doors after exploding on the roof.

Three people were killed and six injured when cluster munitions exploded in the same neighbourhood on the morning of 26 April. Olena Sorokina, a 57-year-old cancer survivor, lost both legs in the blast. She was sitting outside her building waiting for a delivery of humanitarian aid when she heard the sound of shelling and ran to the entrance of the building. She blacked out then woke up in an ambulance, shocked to realise she had lost a leg. At hospital her other leg also had to be amputated. She is now in western Ukraine, hoping to be transferred to a rehabilitation facility elsewhere in Europe. Olena told Amnesty: “After the battle with cancer, now I have to face another battle to learn to function without legs.”

Note: *some surnames have been withheld for security reasons.

Downloads
Anyone Can Die At Any Time