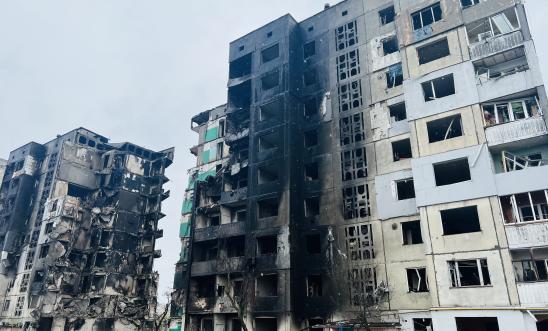 ‘It is vital that all those responsible, including up the chain of command, are brought to justice’ - Agnès Callamard

Russian forces must face justice for a series of war crimes committed northwest of Kyiv, Amnesty International said today, as it published a new report following an extensive on-the-ground investigation in the region.

Amnesty’s 44-page report - ‘He’s Not Coming Back’: War Crimes in Northwest Areas of Kyiv Oblast - is based on dozens of interviews and an extensive review of evidence, including documents left behind by Russian troops. Amnesty documented unlawful air strikes on the town of Borodyanka, and extrajudicial executions in other towns and villages including Bucha, Andriivka, Zdvyzhivka and Vorzel.

Amnesty’s Secretary General, Agnès Callamard, who is currently in Ukraine, has denounced these “unlawful attacks and wilful killings of civilians”.

In Borodyanka, 35 miles northwest of Kyiv, Amnesty found that at least 40 civilians were killed in disproportionate and indiscriminate attacks, which devastated an entire neighbourhood and left thousands of people homeless. In Bucha and several other towns and villages northwest of Kyiv, Amnesty documented 22 cases of unlawful killings by Russian forces, most of which were apparent extrajudicial executions.

On 1 and 2 March, a series of Russian airstrikes hit eight residential buildings in Borodyanka, which were home to more than 600 families. The strikes killed at least 40 residents and destroyed the buildings, as well as dozens of surrounding buildings. Most of the victims were killed in basements where they had sought shelter.

On the morning of 2 March, a single airstrike killed at least 23 people in Building 359 on Tsentralna Street. The victims included five of Vadim Zahrebelny’s relatives: his mother Lydia, his brother Volodymyr and wife Yulia - as well as her parents Lubov and Leonid Hurbanov.

“We [he and his son] left Building 359 just after 7am. However, my mother and my brother and his wife and her parents insisted on staying in the basement because they were afraid of getting shot by Russian soldiers if they went out on the streets. About 20 minutes after we left, Building 359 was bombed and they were all killed, together with other neighbours.”

Vasyl Yaroshenko was close to one of the buildings when it was hit. He said:

“I left my apartment to go do some work in the garage, as my wife was about to take a couple of older neighbours down to the basement. When I reached the garage, about 150 metres from the building, there was a huge explosion. I ducked behind the garage. When I looked, I saw a large gap in the building. The whole middle section of the building had collapsed - exactly where residents were sheltering in the basement. My wife Halina was among those killed. I still see her by the door of our apartment, the home where we lived for 40 years.”

On 1 March, a series of airstrikes targeted six other buildings nearby. At least seven people were killed in Building 371 on Tsentralna Street, including Vitali Smishchuk, a 39-year-old surgeon, his wife Tetiana, and their four-year-old daughter Yeva.

“As the situation deteriorated, it became too dangerous to move from one part of the town to another. There were tanks on the streets … People were frightened to be outside. I was speaking to my son and telling him to leave, but he was worried about going outside. They sheltered in the basement for safety - but the bomb destroyed the middle section of the building, where the basement was.”

No fixed Ukrainian military targets are known to have been located at or around any of the buildings which were struck, though at times armed individuals supporting Ukrainian forces reportedly fired on passing Russian military vehicles from or near some of those buildings. Knowingly launching direct attacks on civilian objects or disproportionate attacks constitute war crimes.

An Amnesty delegation, led by its Secretary General Agnès Callamard, has been visiting the region in recent days, speaking with survivors and families of victims, and meeting with senior Ukrainian officials.

“The pattern of crimes committed by Russian forces that we have documented includes both unlawful attacks and wilful killings of civilians.

“We have met families whose loved ones were killed in horrific attacks, and whose lives have changed forever because of the Russian invasion.

“We support their demands for justice, and call on the Ukrainian authorities, the International Criminal Court and others to ensure evidence is preserved that could support future war crime prosecutions.

“It is vital that all those responsible, including up the chain of command, are brought to justice.”

The town of Bucha, approximately 18 miles northwest of Kyiv, was occupied by Russian forces in late February. Five men were killed in apparent extrajudicial executions by Russian forces in a compound of five buildings set around a courtyard close to the intersection of Yablunska and Vodoprovidna streets, all between 4 and 19 March.

Yevhen Petrashenko, a 43-year-old sales manager and father-of-two, was shot dead in his apartment on Yablunska Street on 4 March. Yevhen’s wife Tatiana told Amnesty she was in the building’s basement, while Yevhen remained in their apartment. He had gone to help a neighbour when Russian soldiers were conducting door-to-door searches. Tatiana lost contact with Yevhen, whose body was then found in their apartment by a neighbour the next day. At her request, Russian soldiers allowed Tatiana to visit the apartment.

“Yevhen was lying dead in the kitchen. He had been shot in the back, [near his] lungs and liver. His body remained in the apartment until 10 March, when we were able to bury him in a shallow grave in the courtyard.”

Amnesty researchers found two bullets and three cartridge cases at the scene of the killing, and Amnesty’s weapons investigator identified the bullets as black-tipped 7N12 armour-piercing 9x39mm rounds that can only be fired by specialised rifles used by some elite Russian units, including those reportedly operating in Bucha during this time.

A collection of Russian military papers recovered in Bucha, which Amnesty researchers analysed, provides further clues as to the units involved. They included conscription and training records belonging to a driver-mechanic of the 104th Regiment of the VDV, the Russian Airborne Forces. Notably, some VDV units are equipped with specialised rifles that fire the armour-piercing round.

On 22 or 23 March, Leonid Bodnarchuk, a 44-year-old construction worker who lived in the same building as Petrashenko, was also killed. Residents who were sheltering in the basement told Amnesty that Russian soldiers shot Leonid as he was walking up the stairs, then threw a grenade into the stairwell. They later found his maimed body in a pool of blood on the stairs. Amnesty researchers found large blood stains on the stairs leading to the basement, as well as burn marks and a pattern of damage on the walls consistent with a grenade explosion.
In neighbouring towns and villages, Amnesty collected further evidence and testimony of unlawful killings, including apparent extrajudicial executions. Some victims had had their hands tied behind their back, while others showed signs of having been tortured.

In the village of Novyi Korohod, Viktor Klokun, a 46-year-old construction worker, was killed. Olena Sakhno, his partner, told Amnesty that some villagers retrieved Viktor’s body on 6 March. She said, “His hands were tied behind his back with a piece of white plastic, and he had been shot in the head.”

Oleksii Sychevky’s wife Olha, 32, and father Olexandr, 62, were killed when the car convoy they were travelling in was fired upon by what they believed were Russian forces.

“The convoy was all fleeing civilians. Almost all of the cars had kids inside. When our car had just reached a line of trees, I heard shots - first single shots, then a burst of gunfire. The shots hit the first vehicle in the convoy, and it stopped. We were the second vehicle and we had to stop, too. Then we were hit. At least six or seven shots hit our car. My dad was killed instantly by a bullet to the head. My wife was hit by metal shrapnel, and my kid was also hit.”

Amnesty researchers who visited Bucha, Borodyanka and other nearby towns and villages in April - after victims had been exhumed, either from the rubble of collapsed buildings, or from the shallow, temporary graves in which many had been buried - found that many family members were unhappy with treatment of victims’ remains. Family members were concerned that the processing of remains was chaotic, that they were not kept properly informed, and that remains in some cases were not being correctly identified.

Downloads
He's not coming back