USA: protesters' safety must be ensured in Kenosha 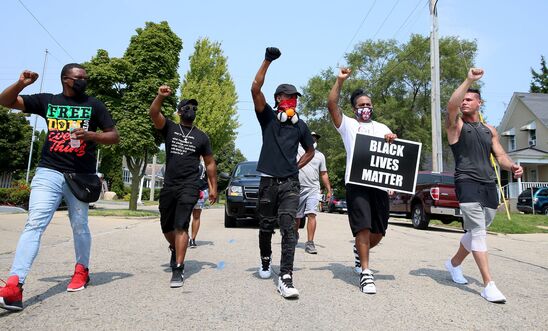 Dangerous permit-less ‘open-carry’ laws in Wisconsin should be repealed

Following reports that two protesters were killed and one injured during protests in the city of Kenosha in the US state of Wisconsin, Amnesty International USA’s End Gun Violence campaign manager, Ernest Coverson, said:

“Once more, we are witnessing why it is crucial for the United States to protect the rights of protesters who are exercising their right to hold peaceful public assemblies and to end gun violence.

“Law-enforcement officers in Wisconsin and all over the US have expressed concern over open-carry laws in the past, as these policies escalate violence and endanger police and the public.

“The only requirement to openly carry a loaded firearm in Wisconsin is that the individual be 18 years old - no permit is needed. Open-carry laws, especially where no permit is required to carry, endanger the public and should be repealed.

“With the Black Lives Matter movement growing into the largest social justice movement in the country’s history, it is more important than ever for law-enforcement officers to dedicate themselves to ensuring that everyone can have their voices heard without losing their lives or being harmed.”

Three nights of protests have taken place in Kenosha after local police shot and severely injured Jacob Blake, a 29-year-old black man, as he tried to get into his car on Sunday.

Earlier this month, Amnesty published a comprehensive report showing that police in the USA had committed widespread human rights violations against protesters, medics, journalists and legal observers during Black Lives Matter protests this summer, with the report documenting 125 separate incidents of police violence.