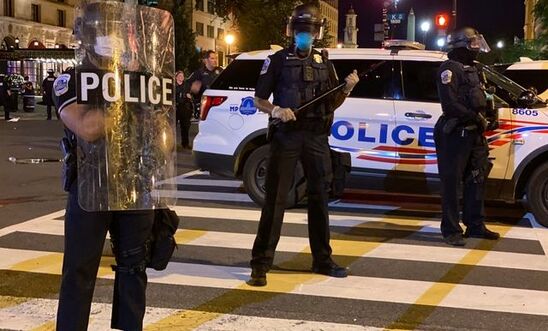 With Trump telling white supremacists to ‘stand by’, states should restrict weapons at polling stations and peaceful assemblies

Law-enforcement agencies across the USA are failing to facilitate people’s fundamental right to freedom of peaceful assembly or to protect protests and counter-protests from violent disruption by armed groups, Amnesty International said today in a new report.

Since the police killing of George Floyd in May, there have been thousands of peaceful anti-racism and political protests and counter-protests across the USA.

Yet in nearly 200 incidents where violence occurred between participants in conflicting protests, Amnesty found that police forces frequently failed to take preventive measures to avoid disruption, and failed to protect protesters from violent attacks when they did occur.

In a series of text messages to the Weatherford police chief, reviewed by Amnesty, Crawford wrote:

“The patriots [armed group members] are surrounding us to force confrontation. We are surrounded by guns and people talking about shooting us loudly ... Where are the police, Chief? This is ridiculous. We are being abused. Where are y’all ... Y’all abandoned us Chief. You abandoned us. You let us get dragged and attacked while you did nothing.”

“As President Trump calls on his supporters to ‘go to’ and ‘watch’ the polling stations, and white supremacist armed groups to ‘stand by’ during the elections, law-enforcement officials should be on high alert to prevent political violence in this explosive moment.

“Government authorities and the police forces they direct must adopt new policies, strategies, and tactics to facilitate and protect peaceful protests, and prevent their disruption by armed groups or other violent actors.”

Amnesty’s 33-page report - Losing the Peace: US police failures to protect protesters from violence - shows that law-enforcement agencies in the USA often neglected to:

Amnesty is calling on US government and law-enforcement authorities at all levels to reform their police forces’ policies and practices to better facilitate freedom of peaceful assembly, and protect protesters from widespread threats of preventable violence.

In the marked absence of federal protection, local-level governments should safeguard protests from violence by issuing temporary executive orders to restrict the presence of weapons in public properties, parks, polling stations and peaceful assemblies; and by instructing their law-enforcement agencies to prevent armed individuals and groups from disrupting peaceful protests and civic activities during the elections period.

Police forces at city, county, state and federal levels should all immediately reform their conduct and implement training on the human rights-compliant facilitation and protection of freedom of peaceful assembly, in line with their obligations under the US Constitution and good practices in policing of assemblies.

Call for freeze of UK exports

In addition to the failures of US policing outlined in the Losing the Peace report, Amnesty has previously documented excessive and disproportionate policing of Black Lives Matter protests since George Floyd’s killing. In June, Amnesty International UK called for the UK authorities to “immediately freeze all policing and security equipment export licences to the US where there’s a clear risk of further misuse” of exported equipment. The UK government reportedly suspended licensing decisions for a limited period, before deciding that exports could resume.

Downloads
Losing the Peace: US police failures to protect protesters from violence