USA protests: UK should review exports of security equipment to US police forces 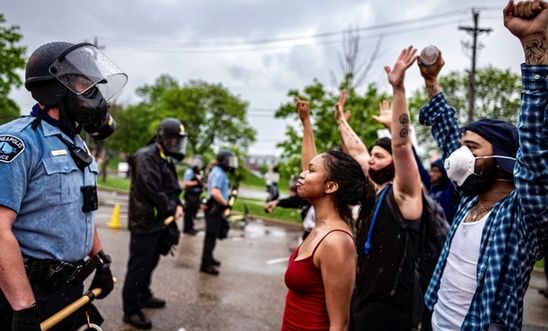 Responding to numerous reports and video footage of excessive and disproportionate police and National Guard responses to protests in numerous US cities over the killing of George Floyd in Minneapolis a week ago, Oliver Feeley-Sprague, Amnesty International UK’s Military, Security and Police Programme Director, said:

“After the shocking images of the police and National Guard using excessive force against Black Lives Matter protesters in Minneapolis, the UK should immediately freeze all policing and security equipment export licences to the US where there’s a clear risk of further misuse - something the UK is obliged to do under its own laws.

“Given the evidence emerging from numerous US cities, there’s a very real risk of UK-manufactured tear gas or rubber bullets being used against George Floyd protesters in dangerous and highly inappropriate ways - something that ministers need to respond to.

“Ministers should be making detailed, case-by-case assessments of any requests for equipment from individual US police forces - withholding exports from any that have clearly acted irresponsibly during the current crisis.

“The UK has a dreadful track record of looking the other way when UK arms and security equipment is misused overseas, even, in some cases, seeking to justify such misuse. Now is the time to start changing that.”

Though official UK Government data on export licences issued for UK arms and security equipment often provides little detail over the precise quantities of equipment sent to particular countries over any given period - and nor does it provide information on the companies that have manufactured the equipment - the limited publicly-available information nevertheless shows that in recent years the UK has approved licences to the US military and law-enforcement authorities for the supply of a wide range of crowd-control and security equipment, including: riot control shields, CS hand grenades, crowd control ammunition, smoke canisters, smoke/pyrotechnic ammunition, tear gas/irritant ammunition and tear gas/riot control agents. Some of this equipment has been supplied to the US under two wide-ranging “Open Individual Export Licences” issued in 2015 (see page 338 of this link) and 2018 (see page 673 of this link), allowing multiple shipments to take place.

Yesterday, Amnesty warned that the “excessive” militarised police response to Black Lives Matter protests in numerous US cities was “exacerbating a tense situation and endangering the lives of protesters”.

Last week, a tweet from President Donald Trump on the protests in Minneapolis was removed from immediate view by Twitter moderators on the grounds that it “glorified violence”.