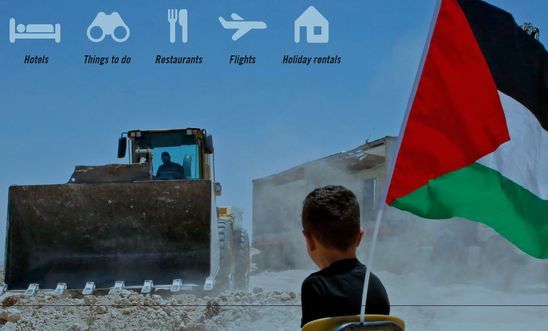 ‘If you’re a company operating in the settlements, then you are involved in systematic injustice’ - Peter Frankental

Companies have been warned that they will be involved in human rights violations - including war crimes - if they do business in or with the illegal Israeli settlements in the West Bank, including East Jerusalem.

Amnesty has written to all companies in the FTSE 100 and FTSE 250 Index, spelling out the human rights and reputational issues of the trade in goods and services in the settlements.

All FTSE 100 and 250 CEOs - along with leading corporate law firms, the Confederation of British Industry, the Institute of Directors and the Association of British Insurers - have been sent a copy of Amnesty’s new 50-page report - Think Twice: Can companies do business with the Israeli settlements in the Occupied Palestinian Territories while respecting human rights? - which says that while a “thriving settlement economy” might appear to provide an attractive location for international businesses, no company can involve itself in this economy without contributing to - or being linked to - human rights abuses.

The issue of business involvement in Israel’s settlements recently made headlines when the US online travel company Airbnb announced it would withdraw some 200 listings for holiday properties and attractions located in settlements in the West Bank. Airbnb said the move recognised that the settlements “are at the core of the dispute between Israelis and Palestinians”.

Amnesty welcomed the Airbnb announcement but the company has so far failed to implement the move. Instead, as Amnesty noted in a recent report on the online travel sector, along with TripAdvisor, Expedia and Booking.com, Airbnb is still profiting from the occupation and theft of Palestinian land and resources.

Apart from tourism, numerous other business sectors - including banking, law firms, construction companies, and food and manufacturing companies - are also heavily implicated in the perpetuation and expansion of the settlements.

Yet, under the UN Guiding Principles on Business and Human Rights, all companies have a responsibility to respect international humanitarian and human rights law wherever they operate in the world. Israel’s settlements breach the Geneva Conventions and amount to war crimes, and Amnesty is warning that no company - however it may seek to justify its involvement - can do business in or with the settlements in a way that is consistent with international humanitarian and human rights law.

The Think Twice report comes ahead of the long-awaited publication of a UN database listing companies known to be operating in the settlements.

“Whether they’re a funky digital-era outfit or a decades-old FTSE 100 giant, all companies need to understand there’s no way to do business in or with Israel’s settlements without contributing to human rights violations against the Palestinian people.

“It’s very simple - if you’re a company operating in or doing business with the settlements, then you’re involved in systematic injustice, discrimination and other human rights violations perpetrated by the state of Israel against Palestinians.

“We would advise all business CEOs, pension fund managers and corporate lawyers to take a good look at our report and do what it says on the cover - think twice about doing business in or with Israel’s illegal settlements.

“Any involvement in the deeply exploitative settlement enterprise is bad for the Palestinian people and bad for your company, whose reputation may be tarnished for years to come.

“There’s a very clear bottom line here - any profits made by a company via the settlements come at the cost of systematically violating the rights of thousands of Palestinian people.”

Meanwhile, in January, Amnesty wrote to International Trade Secretary Liam Fox seeking clarification on whether, post-Brexit, the UK will continue to exempt Israel’s settlements from any trade agreement it reaches with Israel. Under current EU arrangements, the Occupied Palestinian Territories and products created in the illegal settlements within those territories are not covered by the EU-lsrael Association Agreement, which means that settlement goods do not benefit from tariff reductions and cannot be labelled “Made in Israel”.

Call on governments to legislate

As well as calling on individual companies to stop doing business in and with the settlements, Amnesty is calling on governments to make this mandatory through regulation, and to introduce laws prohibiting the import of settlement goods. Each year, hundreds of millions of pounds’ worth of goods produced in the settlements are exported internationally, despite the fact that most countries around the world have officially condemned the settlements as illegal under international law. In the UK, imported settlement goods include oranges, dates, spring water and halva desserts.

The Irish Parliament is currently in the process of approving a landmark bill which would prohibit trade in goods and services with settlements, and Amnesty is calling on other countries to do likewise.

During the course of nearly 52 years of occupation, more than 50,000 Palestinian homes and structures have been demolished, and tens of thousands of Palestinians have been forcibly removed. In their place, more than 600,000 Israeli settlers have been allowed to move into often purpose-built settlements, approximately 250 in number, with many of the settlements serviced by settler-only roads and guarded by a network of Israeli military checkpoints and other security infrastructure. The settlements are illegal under international law and are a war crime. In total, approximately 2,000 square kilometres of Palestinian land has been illegally appropriated for Israeli settlers in the past half-century.