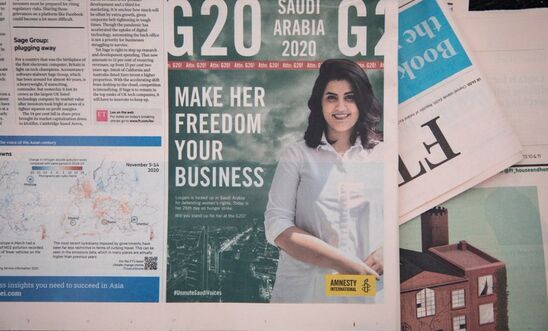 Since Saudi Arabia's presidency of the G20 ended, there's been a sharp rise in repression © Amnesty International

At least 39 people currently behind bars for their activism

Saudi Arabian has brazenly intensified its persecution of human rights defenders and dissidents after a lull in prosecutions during the country’s recent year-long G20 presidency, Amnesty International said in a new report today.

Saudi Arabia’s G20 presidency - which ran from December 2019 to the G20 summit in November 2020 - also saw a sharp decline in the country’s use of the death penalty.

However, like prosecutions and jail sentences, executions in Saudi Arabia have increased markedly since the country stepped out of the international limelight of the G20. After an 85% fall in recorded executions in 2020, at least 40 people were put to death between January and July 2021 - more than in the whole of 2020.

Amnesty’s 21-page report - Saudi Arabia’s post-G20 crackdown on free expression - shows how the Saudi authorities have recently prosecuted, sentenced or ratified the sentences of at least 13 people using the country’s notorious Specialised Criminal Court. Trials conducted by this counter-terror court are intrinsically unfair. In many cases defendants are held incommunicado in solitary confinement for months and denied access to lawyers. The court routinely sentences defendants to lengthy prison terms - and even imposes sentences - following convictions based on “confessions” extracted through torture.

At least 39 people are currently behind bars for their activism, human rights work or expression of dissent in Saudi Arabia, according to Amnesty’s research.

In at least three cases, people who had already finished serving lengthy prison sentences for their peaceful activism were either re-arrested, re-sentenced in new cases or had their sentences increased. In June, a young man from the Shi’a minority was executed following the ratification of a death sentence issued three years earlier based on a grossly unfair trial (see Executions below).

In February this year, Crown Prince Mohammed bin Salman said Saudi Arabia would adopt new laws and reform existing ones to “bolster the principles of justice, enforce transparency” and “protect human rights”. However, the authorities have yet to publish any information about the impact of these promised reforms.

“As soon as the G20 spotlight on Saudi Arabia faded the authorities resumed their ruthless pursuit of people who dare to express their opinions freely or criticise the government.

“In one case, the Specialised Criminal Court sentenced a humanitarian worker to an outrageous 20 years in prison for a simple tweet in which he expressed criticism of economic policies.

“The brief respite in repression coinciding with Saudi Arabia’s hosting of the G20 summit last November indicates that any illusion of reform was simply a PR drive.

“If the Saudi authorities want to show they are serious about respecting human rights, a first step would be to immediately and unconditionally release all human rights defenders detained solely for peacefully exercising their human rights, and ensure their convictions are quashed and all remaining penalties lifted.”

In April this year, the Specialised Criminal Court sentenced humanitarian worker Abdulrahman al-Sadhan to 20 years in prison (followed by a 20-year travel ban) for satirical tweets about government policies. The charges were based on vague counter-terrorism provisions, some of which criminalise peaceful expression.

In another Specialised Criminal Court case, human rights activist Israa al-Ghomgham was jailed in February for eight years on charges related to her peaceful activism and participation in anti-government protests. In another case, Mohammad al-Rabiah, who was arrested in May 2018 for supporting the women’s right to drive campaign, was sentenced to six years by the court.

During 2020 recorded executions in Saudi Arabia dropped by 85%. However, immediately Saudi Arabia’s presidency of the G20 ended executions resumed, with nine people executed in December 2020 alone. At least 40 people were executed during January-July 2021 - more than the 27 put to death during the whole of 2020. In many cases, executions came after convictions in grossly unfair trials, including ones seriously marred by claims of torture during pre-trial detention and forced “confessions”.

In June this year, Mustafa Darwish, a young Saudi Arabian man from the Shi’a minority, was executed following a grossly unfair trial by the Specialised Criminal Court on terrorism-related charges. He was convicted in 2018. He told the judge in one trial session:

“I was threatened, beaten and tortured into giving a confession … I confessed in fear for my life.”