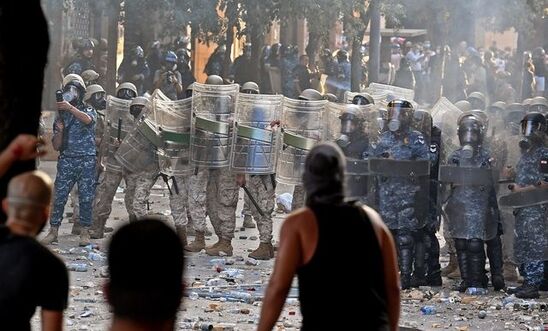 ‘This outrageous violent conduct must be thoroughly investigated’ - Lynn Maalouf

The Lebanese army and security forces - as well as unidentified men in civilian clothes - shot at unarmed crowds during protests in Beirut following last week’s devastating explosion in the port district of the city, an Amnesty International investigation has found.

Videos verified by Amnesty’s Crisis Evidence Lab show that there was a punitive shoot-to-harm use of force, indicating the authorities intended to punish protesters and dissuade others from protesting. Analysis also confirmed security force members who were dressed in civilian clothes had fired into crowds.

Doctors themselves were also targeted with tear gas as they tried to treat injuries. Dr Elie Saliba told Amnesty he was assaulted three times on 8 August while in Martyr’s Square: he was hit by a pump action pellet in the shoulder, then by a spray of pellets on the head and face, and then beaten by army officers. After being hit by the pellets, he said he approached an army officer to ask why they were shooting into the crowds. The army officer told him, “You elected this regime”, and Dr Saliba replied, “I never elected any of the leaders of the corrupt regime.” He was then assaulted.

(See below for further examples of rubber bullets and tear gas canisters being fired at unarmed protesters).

To date, all security and military agencies’ statements have denied any responsibility. One member of the Lebanon Internal Security Forces has died in circumstances that remain unclear.

“It is unlawful to use tear gas if the canister is fired directly at a person. The horrific injuries sustained by protesters are no doubt a result of security forces setting out to deliberately hurt people.

“Doctors and aid workers have endured an overwhelmingly traumatic week, working relentlessly on saving lives following the blast. Now they find themselves not only having to treat casualties of state violence, but also being shot at and beaten. Where is the basic human decency?

“All those responsible for this outrageous violent conduct must be thoroughly investigated and held to account for their criminal actions.”

Amnesty interviewed six protesters who were in Beirut on 8 August when the crackdown escalated. They all reported seeing security and military forces shooting rubber bullets and tear gas canisters directly into the crowd at chest level and from close range, indicating that they were shooting to harm. Protesters also reported suffering injuries from small rubber pellets fired from an unidentified source.

Doctors have reported at least six cases of eye injuries. All of the injured were aged between 18 and 21, and had been struck in the eyes with pellets. A medical team at the Department of Ophthalmology at the American University of Beirut removed the eye of one young man completely, while others lost their sight to varying degrees.

Amjad* was shot in the neck with a rubber bullet, according to medics. A vein was hit, and he suffered significant blood loss before being taken to Rizk Hospital. He said:

“We were in Riad Al-Solh Street. I saw the riot police and the army shooting directly at the protesters from a close range. They were around 12 metres away from us, and then I felt blood pouring from my neck. I pressed on the wound with my fingers and walked in the direction of the Red Cross to get help. I then fainted and the people there helped me.”

Under international guidelines, rubber bullets may only be used as a targeted tool to stop individuals engaged in violence, and should never be fired indiscriminately into crowds. In addition, they may only ever be aimed at the lower part of the body with a view to minimising injury.

Jad* was in Azarieh district when he was hit in the face by a tear gas canister, suffering a broken nose. He told Amnesty:

“As we were packing to leave, I was hit in the face above my right eye with a tear gas canister. My nose is broken and my whole face is swollen.”

Faten* was hit by a tear gas canister in her right shoulder. She was also in the Azarieh district when riot police attacked the crowd. She told Amnesty:

“The riot police were only ten metres away. I felt I was hit by something on my shoulder. I couldn’t feel my arm anymore. I thought I lost it, and then I collapsed. They were shooting tear gas at chest level directly at the people.”

Tear gas canisters fired from launchers can cause serious harm. Tear gas should only be used in situations of widespread violence for crowd dispersal, and only when all other means to contain violence have failed. Although there were minor acts of violence by a small number of protesters, this does not justify use of force to disperse an entire protest, or allow security forces to treat the entire protest as an non-peaceful one.

Calls for international investigation into explosion

Amnesty has called for an international investigation into the 4 August Beirut port explosion, a massive blast which killed at least 220 people and left an estimated 7,000 more injured. The Lebanese president Michael Aoun has said the explosion was caused by 2,750 tonnes of ammonium nitrate that had been stored unsafely in a warehouse.

“The Lebanese authorities must cooperate with an international investigation into the explosion, and focus on delivering truth, justice and reparations to the many victims.”