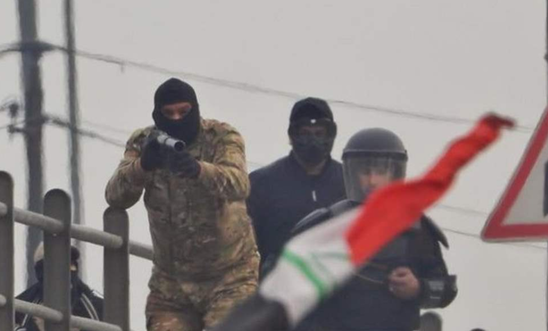 More than 600 protesters killed since demonstrations began in October

The security forces in Iraq have again used live ammunition and military-grade tear gas canisters against largely peaceful protesters in Baghdad and cities in southern Iraq, said Amnesty International, with at least 12 people killed in two days of violence earlier this week.

Chilling eyewitness testimony and video analysis by Amnesty show that a crackdown on renewed protests took place during 20-22 January, with at least ten people killed in Baghdad, Basra, Karbala and Diyala, according to the Iraqi High Commission for Human Rights.

Activists in Basra also reported two further deaths on Wednesday, while scores have been injured and arrested, with some subjected to torture in custody. The overall death toll since protests erupted in the country in October has now exceeded 600.

Amnesty’s Crisis Evidence Lab has verified videos from several flashpoints in recent days, confirming live ammunition has again been used against unarmed protesters. Amnesty is also able to confirm the first use of deadly military-grade tear gas grenades since November.

Two young men interviewed by Amnesty described disturbing scenes on 21 January along the Mohammed al-Qasim highway overpass in Baghdad, north-east of Tahrir Square, a focal point of the protests since October.

One of the men described what happened when security forces intervened:

“[Three protesters] died because they were shot in the head. Some of the protesters were on the highway, there were clashes with the security forces. Security forces used live ammunition against protesters to disperse them from the highway, and in some cases, they grabbed protesters by their arms and threw them off the overpass. The highway is about five to seven metres above the ground.”

Amnesty’s Crisis Evidence Lab has geolocated and verified multiple videos of the events along the highway overpass on 21 January. One of the videos clearly shows multiple vehicles with the logo of an elite SWAT team that reports to the prime minister. Several videos show masked, uniformed men launching tear gas grenades directly at protesters’ heads at close range. Amnesty has previously documented how this tactic, using military-grade tear gas and smoke grenades manufactured in Iran and Serbia, killed dozens of protesters in October and November. An Iraqi photographer captured one of the uniformed men on video doing what appears to be a victory dance after firing at protesters below.

One of the protesters present on 21 January said:

“I saw one of the anti-riot members shoot a tear gas canister at a boy’s face. A very young boy. He was only one or two metres away when he [an anti-riot officer] shot him in the face. It was so shocking. Like an execution. It was instant chaos. I thought he’s surely dead, but he survived, but is in critical condition. Another boy died yesterday when a canister hit him in the head, but I did not see that with my own eyes.”

Multiple graphic videos shared on social media captured the moments the victims of these attacks were bundled into tuk motor vehicles and ferried away from the scene.

“This worrying evidence signals that the Iraqi security forces have resumed their lethal campaign of repression against protesters who are simply exercising their rights to freedom of expression and to peaceful assembly.

“This abhorrent pattern of deliberate killing, torture and repression must be stopped without delay.

“The Iraqi authorities must urgently rein in the security forces, remove those responsible for serious violations, and initiate thorough, independent investigations aimed at bringing accountability and redress for victims and their families.”

Following the violence in Baghdad on 21 January, an eyewitness told Amnesty how that evening armed members of the Presidential Guard chased protesters through the streets of al-Dora, a residential and commercial neighbourhood several miles south of central Baghdad.

A young man involved in the protests in the area since October, told Amnesty:

“The presidential forces at the main checkpoint there received back-up … They were all armed now and started shooting in the air and chasing people. They beat and dragged people away. Very young boys. We started running though al-Tuma street. There are coffee shops there and a gym, and people started running into the shops. They chased them into the shops and dragged them away. They also dragged away anyone in the shops who tried to help the protesters. They started taking phones from people who were filming and dragging away anybody who resisted handing the phone over to them.”

Amnesty verified footage from al-Dora corroborating the fact that the security forces fired live ammunition at fleeing protesters after nightfall on 21 January.

Meanwhile, activists in Basra described how security forces on 21 and 22 January violently dispersed protesters, including by meting out severe beatings and firing live ammunition.

One activist, who provided first aid to the protesters, said:

“The security forces were using the harshest, dirtiest means to deal with protesters, and the beatings continued for a long time until their [the protesters’] clothes were torn and some lost consciousness. Then they carried them to the back of the vehicles of the Shock Forces [Basra-based security forces affiliated to the Ministry of Interior].”

Amnesty viewed photographic evidence of serious wounds across the back of one protester, consistent with beatings that could amount to torture. In one video which emerged on social media, apparently filmed near Al-Maqal Police Directorate, detainees’ screams could be heard.

A protester in Basra told Amnesty how the violent crackdown had escalated in recent days as a range of different security forces arrived to disperse the protests:

“I witnessed many cases where the security forces were dragging people on the ground and beating them. Some were underage, 14 or 15-years-old, tops. When the beaten protesters returned to the main area of protests, they would have marks of batons and sticks on their bodies.”

He also described intense violence from the security forces overnight on 21 and 22 January, using a variety of lethal and “less-lethal” weapons:

“For the last two nights, it’s been the same pattern: the security forces come around 11pm-to-midnight, when there are fewer protesters and begin shooting. I4t’s like they are coming just to kill us.”

Amnesty verified videos showing the security forces firing live ammunition in Basra, and one apparently wounded person being carried along Dinar Street near the Shatt al-Arab river on 21 January.