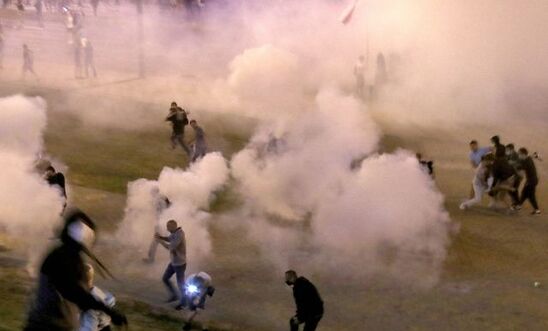 Amnesty International’s delegates in the Belarusian capital Minsk witnessed appalling violence by riot police against peaceful protesters who had taken to the streets last night after official announcements over presidential election results which protesters view as rigged.

With mass protests in Minsk and other Belarusian cities growing for months in the lead-up to the elections, thousands demonstrated yesterday.

Though there have been reports of isolated pockets of violence by some protesters, Amnesty’s assessment is that these incidents were in response to heavy-handed policing.

Amnesty delegates did not witness protesters among crowds resorting to violence; they did however see police using unprovoked and indiscriminate force. One protester in Minsk is confirmed dead, while dozens more have been seriously injured.

“Official exit poll results” announced by the government yesterday pointed to a sweeping win for the incumbent Alyaksandr Lukashenka. Informal exit polls had suggested a landslide victory for the opposition candidate Svaytlana Tsikhanouskaya.

“Last night, Amnesty International delegates witnessed first-hand the viciousness of the police response, which included indiscriminate use of force - including stun grenades - against a peaceful crowd, and arbitrary arrests of individuals who were far from any protest.

“One horrifying video shows a police van running over a protester at full speed on a wide road. This footage captures the blood-chilling ruthlessness of the Belarusian police’s actions last night, and shows why so many in Belarus are desperate for change.

“The authorities must do everything they can to avoid further violence. There must be a thorough and effective investigation into the appalling events of last night, so that every officer responsible for human rights violations is brought to account.”

Call for release of detainees

Amnesty is calling for the immediate release of peaceful protesters and political activists, including those detained in politically-motivated proceedings in the run-up to yesterday’s election.