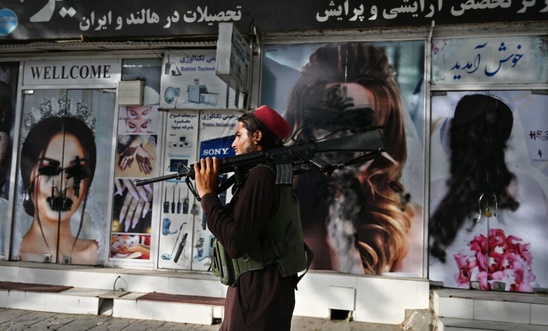 A Taliban fighter walks past a beauty salon in Kabul last week. The women's faces were sprayed over after the Taliban took control of the city © AFP via Getty Images

Ahead of today’s G7 meeting, Amnesty UK called for members states to ‘lead by example’

The UN Human Rights Council has shamefully failed the people of Afghanistan after neglecting to establish an independent mechanism to monitor ongoing crimes under international law and human rights violations and abuses, Amnesty International said today.

At the opening of today’s special session of the Human Rights Council, the Afghanistan Independent Human Rights Commission, the UN High Commissioner for Human Rights, and a host of other civil society speakers - including Amnesty - unequivocally called for the creation of a robust investigative mechanism.

Such a mechanism would allow for monitoring and reporting on human rights violations and abuses, including grave crimes under international law, and to assist in holding those suspected of criminal responsibility to justice in fair trials.

However, the calls were ignored by Human Rights Council member states, who adopted by consensus a weak resolution which merely requests further reports and an update by the UN High Commissioner for Human Rights next March, which adds little to the oversight process already in place.

“The UN Human Rights Council special session has failed to deliver a credible response to the escalating human rights crisis in Afghanistan.

“Many people in Afghanistan are already at grave risk of reprisal attacks. The international community must not betray them, and must urgently increase efforts to ensure the safe evacuation of those wishing to leave. States must now move beyond handwringing, and take meaningful action to protect them.

“Amnesty International’s recent on-the-ground investigation into the massacre of Hazara men in Ghazni province is proof that the Taliban’s capacity for murder and torture has not diminished.

“UN member states must correct today’s failure when the Human Rights Council meets again in a few weeks. A robust investigative mechanism - with a mandate to document, collect and preserve evidence of ongoing crimes and human rights violations across Afghanistan - is urgently needed.”

Earlier today, Amnesty UK called on UK Prime Minister Boris Johnson to “lead by example” at an emergency G7 meeting convened to discuss the situation in Afghanistan. Amnesty called on G7 countries to “put politics aside and work with all countries in the region - especially Pakistan and Iran - to ensure that borders are kept open and material assistance provided”. Last week, Amnesty UK criticised the UK’s Afghan Citizens' Resettlement Scheme as “too little too late” and called for more urgency.

Amnesty has called for the protection of thousands of people at serious risk of Taliban reprisals - including academics, journalists, civil society activists and women human rights defenders. Last week, Amnesty revealed how the Taliban were responsible for killing nine ethnic Hazara men after taking control of Ghazni province last month. Three of the men were tortured to death, the other six were shot. The killings are likely to represent only a tiny fraction of Taliban killings following recent territorial gains, as the group have disabled mobile phone services in many captured areas delaying the dissemination of information about their atrocities.