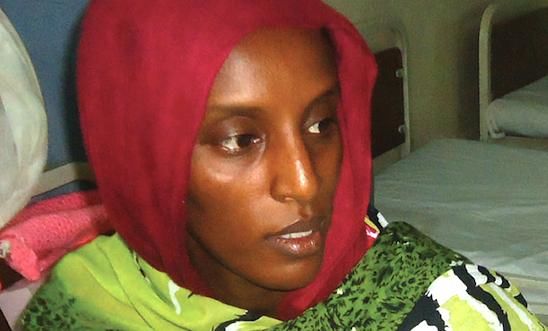 Six weeks after she was sentenced to hang, Meriam Ibrahim, a 27-year-old mother of two young children who was facing execution for refusing to renounce her Christian faith, has been freed from Sudan's death row.

'I would like to thank all those who stood beside me.'
Meriam, interviewed by the BBC on her release

We launched a high-profile campaign for Meriam’s release that saw over a million people around the world call on the Sudanese authorities to release Meriam. The authorities have heard those callls: this week they released Meriam from death row and dropped the charges that led to her death sentence.

Meriam had been sentenced to death for refusing to renounce her Christian faith. In May 2014, she was found guilty of the crime of apostasy under Sudan’s Sharia law. She was also due to be flogged for being married to a Christian man.

Reunited family now have a future together

On 23 June, Meriam’s lawyer confirmed that a court of appeal found Meriam innocent of all charges against her. Later that day, she walked out of the women’s prison in Khartoum with Maya, her newborn daughter, and Martin her one-year-old son. Both children had been with their mother in her death row cell.

Meriam gave birth to her daughter, Maya, in prison on 27 May. While in prison, Meriam was shackled by heavy chains around her ankles - customary practice for all prisoners awaiting execution. Her lawyers say that Meriam remained chained by her legs even while she was in labour.

Now, Meriam and her children are reunited with husband and father Daniel Wani. The young family can now look forward to a future together, and Maya and Martin can grow up with a mother.

On her release, Meriam initially intended to fly with her family to the United States – her husband is an American citizen. But when they arrived at Khartoum airport, they were detained by Sudan’s National Intelligence and Security Services and Meriam was charged with providing false information about her travel documents.

Meriam was been released (again) on bail, but couldn’t travel until her case was closed.

On Thursday 24 July Meriam and her family flew to Rome accompanied by the Italian Vice-Minister for Foreign Affairs Lapo Pistelli.

They were met by the Italian Prime Minister Matteo Renzi who said: 'Today is a day of celebration.'

Thank you to all who took action for Meriam

Thank you especially to the quarter of a million people in the UK who took action with us. Your emails, texts and letters really have made a difference.

International pressure and media coverage threw the spotlight on Meriam's case, and the authorities could no longer justify her execution. Meriam's freedom is proof that putting pressure on authorities at the right time, in the right way, really does work.

Meriam was eight months pregnant when she appeared before a court in Khartoum, Sudan’s capital city, on 15 May on charges of 'apostasy' and 'adultery'. When she refused to renounce her Christian faith, the judges sentenced Meriam to death by hanging. She was also sentenced to 100 lashes for being married to a Christian man.

Meriam had committed no crime. People like Meriam, imprisoned because of what they believe or simply who they are prisoners of conscience.

Sentenced to execution for ‘apostasy’

Sudan follows Sharia (Islamic) law in its Criminal Code, and ‘apostasy’ (Riddah, in Arabic) is punishable by death. Apostasy is the renouncing of Islamic religion, either by refusing to follow Islam, or through being a believer of an alternative religion.

Those charged with apostasy have three days to renounce their religion and follow Islam. Meriam first appeared before the court in Khartoum on 11 May. When, on 15 May, she refused to renounce her Christian faith, her death sentence was confirmed.

Sentenced to 100 lashes for marrying a Christian

Meriam was first arrested in August last year because her husband is Christian. Under Sudan’s Sharia law, marriage between a Muslim woman and a non-Muslim man is illegal, and constitutes adultery.

One of her relatives had claimed that Meriam was committing ‘adultery’ for marrying outside of Islam, and reported her to authorities. But Meriam identifies as Christian – while her father is Muslim, he was absent during her childhood and she was raised Orthodox Christian by her mother.

Meriam was sentenced to 100 lashes for being married to a Christian. Flogging constitutes torture, and should never be used as a punishment; ‘adultery’ is not a crime that should be punishable by the courts. On 23 June Meriam's flogging sentence was also overturned in the court of appeal.

Is hanging for 'apostasy' common?

We don't know of anyone who has been executed for 'apostasy' in Sudan since the 1991 Criminal Code was brought in. Many people have been charged with the crime but had their charges dropped or convictions overturned after renouncing alternative religions and following Islam.

Meriam is one of the only people we know to have been sentenced to death for apostasy and had her conviction overturned, without renouncing her current faith.

This cannot happen to anyone else

Meriam committed no crime. We hope that no one else has to experience what Meriam has gone through. Therefore, Sudan should stop using the death penalty. It is the ultimate denial of human rights and, as Meriam’s case shows, it can be used arbitrarily to punish those who have committed ‘non-lethal crimes’; Meriam was due to be executed just for her choice of religion.

We recorded at least 21 executions in Sudan last year. At least 29 people were sentenced to execution last year in official reports, although the real figure is believed to be much higher - over 100.

Meriam was also sentenced to flogging for ‘adultery’ (her marriage to a Christian man was not recognised by Sharia courts, therefore her relationship and children were seen as being outside of wedlock). Again, Sudan should abolish flogging as a punishment. It is a form of torture that has no place in a modern justice system.