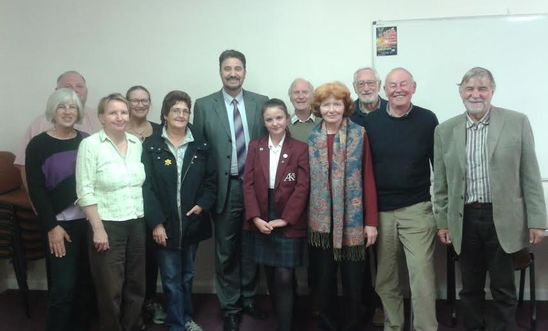 On Friday 16 October the North West Euro MEP, Afzal Khan, was the guest of the Fylde Coast Amnesty group and he took part in a question and answer session.

The current refugee crisis can only be solved by joint action, he told Amnesty members. The scale of the problem has been unprecedented over the last 70 years, with up to 52 million refugees worldwide.

Syria alone has eight million internally displaced nationals, and another four million who have been forced to flee the country. Most are concentrated in the poorer neighbouring states of Jordan, Lebanon, Iraq and Turkey, which do not have the finances and infrastructure to deal with them.

In Lebanon, he said, refugees now comprise 20-25% of the population, compared with just 0.2% in the European Union.

As far as the EU was concerned, he said, Germany was dealing with 1,300 refugees per day, whilst Britain’s promise to take 20,000 over five years amounted to a mere 11 people every 24 hours.

Afzal khan, who is a Labour MEP, said the British government’s reluctance over refugees contrasted strongly with Angela Merkel’s bravery on the issue. If every country played its part, the problem would be smaller, and he was sure the EU would eventually come up with solutions.

In the meantime, individuals could help by lobbying their local authorities, helping organisations like the Red Cross, challenging attitudes, lobbying politicians and trying to combat racism.

Turning to wider Middle East affairs, he said the EU was Palestine’s biggest donor, and the community was also Israel’s largest trading partner. He suspected the present Israeli government was buying time whilst it strategically and systematically ate into Palestinian land. But he doubted the EU would ever agree economic sanctions against the Israelis because of Germany’s historic guilt over its Nazi past.

Mr Khan said he had received 10,000 letters protesting against the proposed trans-Atlantic trade partnership, TTIP. But negotiations were likely to continue for another one to two years before the process was concluded.

He said that he had personal ‘red lines’ over the involvement of the NHS and public services in the agreement, and that he would not tolerate the introduction of secret courts or the driving down of workforce conditions. However, a deal excluding these items, could be economically beneficial and provide Europe with more muscle.

The MEP accused the Government of systematically dismantling Britain’s human rights protection through measures like its cuts to legal aid and the increased fees for tribunals. He said that the Government presented a distorted picture of the impact of the Human Rights Act by highlighting extreme examples.

Important safeguards should not be abandoned because of a few cases of abuse, he maintained.  Rules such as those in the HRA could have a life-changing impact. People should not forget the amazing improvements brought about by the seemingly bureaucratic clean air and clean water regulations.

Amnesty, he added, was very well regarded in the EU, which regularly received its reports and listened to its representatives. It was a powerful pressure group that should keep up its good work.

Concluding, Mr Khan said millions of jobs were linked to the EU, which had also introduced social rights, cracked down on mobile phone abuses and enabled citizens to travel through all 28 member states without having to apply for visas.

The environment did not stop at national borders, and nor did the activities of the huge multi-nationals, which were capable of dominating individual nation states, but not the community as a whole.

The EU had a democratic framework, however imperfect, and was being seen in other parts of the world as a model for future co-operation. “We have a story to tell, but the EU must sell itself more powerfully,” he added.