Dramatic rise in executions in 2015: the most in one year for a quarter of a century 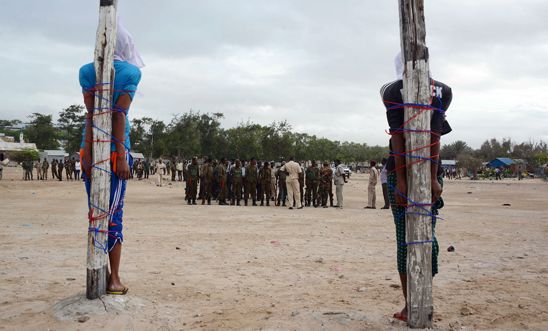 The past year has seen a horrific increase in executions around the world – the most we’ve recorded in a single year since 1989, and an increase of an astonishing 54% from the year before.

A few countries are executing prisoners by the hundreds, sometimes for crimes that aren’t serious, sometimes after trials and treatment that isn’t just or fair, and always violating the individual’s right to life and right to be free from torture.

From Australians Myuran Sukumaran and Andrew Chan shot by firing squad for drugs charges in Indonesia to Shafqat Hussain, hanged in Pakistan for a crime he confessed to after torture, aged just 14, over 1,634 individuals were put to death by state authorities last year.

We recorded a huge increase in the death penalty, an increase of 54% compared with 2014. This is the largest number of state executions for a quarter of a century.

The number of countries that executed people rose – from 22 in 2014 to 25 in 2015. At least six countries resumed executions: Bangladesh, Chad, India, Indonesia, Oman and South Sudan.

Countries continued to flout other aspects of international law, putting to death people with mental or intellectual disabilities, as well as those charged with non-lethal crimes. Apart from drug-related offences, people were executed for crimes such as adultery, blasphemy, corruption, kidnapping and 'questioning the leader’s policies'.

The death penalty is always a violation of human rights. We oppose it in every case.

A minority of countries are committing the majority of executions. 89% of executions in 2015 took place in just three countries: Iran, Pakistan and Saudi Arabia.

Pakistan lifted its freeze on civilian executions in December 2014, and in the year that followed killed 326 people – the most we've ever recorded for that country in a single year.

An attack on a school in Peshawar prompted the government to start executing again, something it had not done since 2008. Initially, the freeze was lifted for those charged with terrorist-related offences, but in March 2015 the government resumed executions for all capital crimes, such as murder and blasphemy.

In a country where people are routinely denied the right to a fair trial, and evidence extracted through torture is used to seal convictions, hundreds of people are being sent to their deaths under the pretence of justice being served.

Last year saw a huge surge in executions for an already prolific executioner. These figures don't even include Saudi Arabia's mass execution of 47 people at the start of this year.

But these figures exclude China, where numbers remain a state secret, yet where we believe thousands of people are executed every year. We consider China to be the world’s top executioner, although the numbers are missing from this report.

We haven’t published figures for executions in China since 2008; we're challenging the Chinese government to reveal their own figures and demonstrate that they really are limiting their use of the death penalty - something they have claimed to be doing since the country’s highest court began reviewing all death penalty cases back in 2007.

We also don’t publish figures for North Korea, a state shrouded in secrecy.

Four countries abolished the death penalty for all crimes – the highest number to do so in the space of one year for almost a decade.

Madagascar, Fiji, Suriname and Congo all did away with the death penalty in the national laws once and for all.

Mongolia adopted a new Criminal Code outlawing the death penalty for all crimes in December which will enter fully into law in September 2016.

We still hope for a world without the death penalty, and today half the world has abolished it for good. Add to this countries which have abolished this punishment in practice, as opposed to law, and the total comes to two-thirds of the world.

Download the full facts and figures in our report below.